Every now and then the stars align rather perfectly, and that happened this past Saturday for me. Many months ago, I found out my grad school endeavors would be taking me to Scotland for 10 days; mostly in the rural highlands where the class would be working, but with a final day in Edinburgh before heading back to the States. I wrote to a dear friend (and now rather long-distance partner in historical adventuring) who lives there to make sure I'd be able to see her...and found out that I'd be in town on the day of a rare event: a Regency ball! Obviously, we'd have to go.

And I'd need a dress. 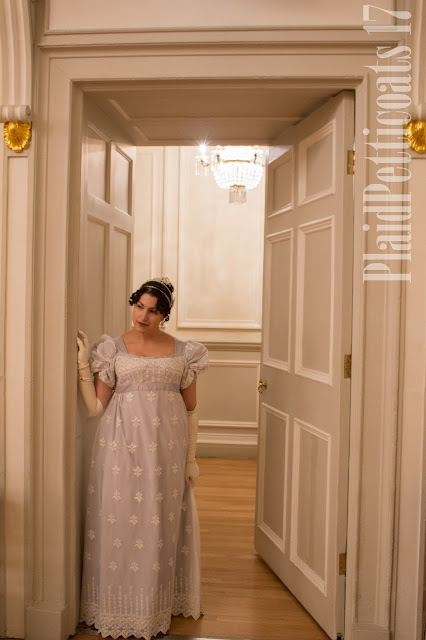 I'll write a post dedicated to the event itself, which was held in honor of the bicentennial anniversary of a ball held in the Edinburgh assembly rooms on the same date in 1817. Once I get pictures of the ball from the official event photographer (the utterly awesome Juliette), I'll write more about it. In the meantime, dress!

I struggle with Regency, and as a result I've never had clothes for the period that fit me well. Eventually I just sort of halted on making anything new until I had stays that fit, because I had a feeling my lack of acceptable structure was a large part of the problem. Now that I finally do have stays I like (not made by me), I was excited to make some new things to go over them...and this ball was a perfect opportunity!

Having fallen in love with this 1823 fashion plate, I had my inspiration. Of my existing dresses I have always liked the fit of my first-ever Regency dress best, which I made using one of the dresses in Janet Arnold's Patterns of Fashion. So back to the source I went, and started with Arnold again for this dress.

After getting the pattern right (which included many tears...ugh), the construction itself was pretty straightforward. The embroidered net and silk for the main bodice pieces were sewn as one with the lining, and then attached to the bands that form the neckline. The sleeves are similarly assembled (with a lot of piecing, because I was running out of embroidered net!), but unlined. The vertical gathers were totally wung (winged?), but I'm really really pleased with the way they came out! The sleeves are actually long rectangles that I gathered horizontally/normally into the armscyes and plain silk bands as well as gathering vertically in four places. The net and silk skirt layers were sewn separately but attached together to the waist, which is a teensy bit wider/lower because I was aiming for the later part of the period given the 1817 anniversary.

Given the lovely gilded details of the room, I gave in to temptation and blinged out, although given I'd had very limited packing space I think it was still pretty restrained. I pin-curled my hairline using LBCC lavender pomatum and then just pinned the rest of it up at the crown of my head. I didn't get any great pictures of the silver floral bit on the front of my bun/curl pile, but the idea was inspired by this painting:
And of course, I couldn't possibly go to a ball in Scotland without at least a little bit of tartan! Since I wasn't making a tartan ballgown, I settled for tartan shoes.

I joked that the gathered sleeves were my "pretty pretty princess" sleeves, but I definitely felt elegant and princess-like dancing in the assembly rooms! You'd never know that just an hour before I'd been frantically hemming like the wind. (Some things never change.) 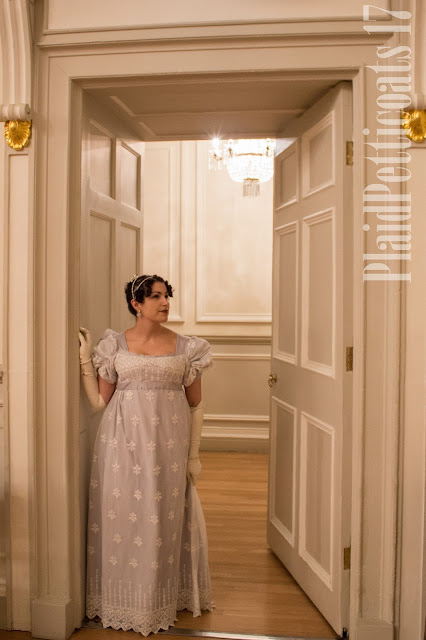 I'm already looking forward to wearing this again for the Regency Weekend in April!