Rallying for the Vote

Back in September, I had a fabulous weekend dancing in pants and rallying for women's suffrage in 1915!

Then grad school kicked up, and I have been so busy with science I haven't had time to edit photos. I took a paper-writing break today and finally got around to it, so with very little ado here are some pictures from the women's suffrage rally and tea! 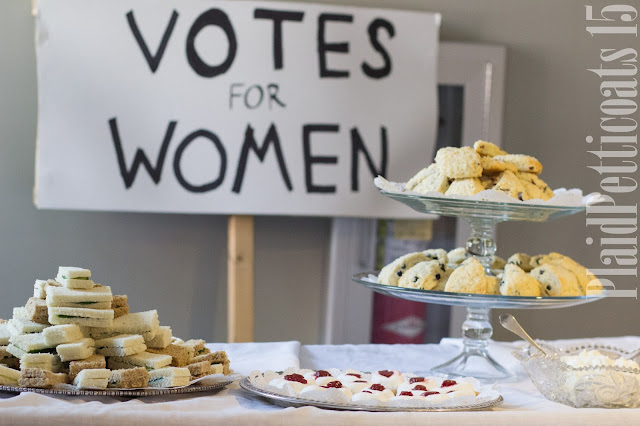 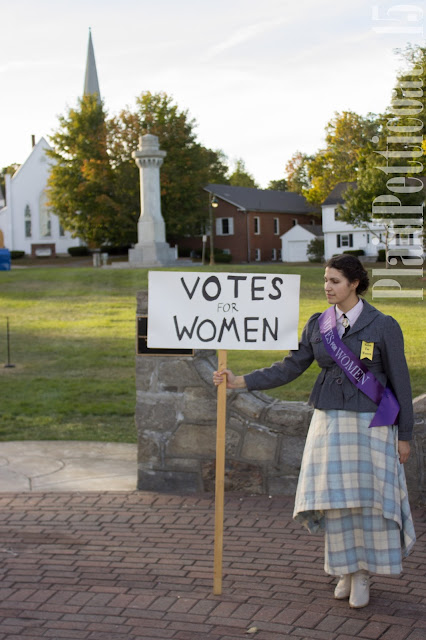 One thing I couldn't capture here was how many generations attended this event, including my mom and her new puppy (just for the marching part!). Mothers passing on the world to their children was a huge theme during the women's suffrage movement, and it was nice to see such a diverse group getting into the spirit! It's Fall, and with the change in seasons comes a change in wardrobe...to tweed blazers and wool skirts, tall socks, and felt hats. Yum!
So while normally this blog is the place to find tartan in the 19th century, today I'm taking a turn into the history of tweed (specifically, Harris tweed).

Tweed has an open weave, usually with a "tweel" (or "twill"), a diagonal line running through the fabric that increases the weave's strength making the cloth warmer and more stable. While this weave gives tweed its traditional "v" shape, tweed can also include a variety of patterns (even plaid!).

Like tartan, tweed was the durable cloth of farmers until the 19th century, when it was "discovered" by the landed gentry and its popularity exploded. In 1846 Lady Dunmore, widow of the Earl of Dunmore (the landowner of Harris), commissioned her family tartan to be woven out of the local tweed (or she wove it herself, depending on who you ask--I think it's more likely she commissioned it). Lady Dunmore turned out to be quite a good marketer, and her endorsement greatly increased interest in and sales of Harris tweed for sporting clothes.

One member of the gentry whose eye was caught by Harris tweed was beginning a love afair with Scotland we've already mentioned: Prince Albert. In addition to designing several tartans for Balmoral Castle (purchased in 1848) and the royal family, Prince Albert designed the Balmoral tweed.

Just as tartans were associated with specific clans in the 19th century, specific tweeds became associated with estates, and special "estate tweeds" had their own color schemes. The end of the 19th century also saw a rise in women's participation in sports--golf, bicycling, hiking--which meant more sportswear! Tweed skyrocketed, becoming an integral part of a wealthy, fashionable wardrobe for both genders. It was in such high demand that by 1903 production had spread from Harris to other islands in the Outer Hebrides.

By 1906, Harris tweed had become so popular and weaving technology had developed enough that the Harris tweed weavers were concerned that low quality copies would emerge. To prevent this members of the Harris tweed industry met in Stornoway, where tweed standards and an inspection system were developed to certify true Harris tweed (the stamp went into full effect in 1911). If you buy stamped, official Harris tweed today, it still meets those standards.

But I mentioned that in the beginning of the boom, Lady Dunmore commissioned a tartan out of tweed--so what exactly is the difference? It's all in the weave. Tartan is a pattern--plaid, in particular--that is woven (or at least, is capable of being woven, and the official register has thread counts for every tartan), while Harris tweed is a particular weave--that includes the diagonal "twill"--and depending on the colors, could include a pattern. Which means that you could weave a tweed with a tartan pattern, but there are many many tweeds which aren't tartan! Oi vey.

PANTS! In the BALLROOM!

For some reason, I've been all about Poiret for the last couple of months. That turned into two projects: a dinner dress and a jupe-culotte evening ensemble.

Yep, you read that right. I wore pants to a ball.

A pant-ed outfit seemed appropriate for this ball in particular, because it was paired with a women's suffrage rally (more on that soon) and it was our "Chelmsford Abbey Ball." A Poiret jupe-culotte outfit definitely fit with those themes!


While I was researching jupe-culotte ensembles from the 1910s, I noticed a few trends I liked: metallic embellishments, stripes up the leg, over-robes (which I didn't end up making, but want to!), and elbow-length narrow sleeves.

But I have to admit that my favorites weren't actually Poiret.

Or in the case of Lady Sybil's season one costume, not even an original piece from the teens. I ended up using a new source for materials for this project: a sari. I found a beautiful silk one on eBay that was being sold as-is (there were some damaged spots in the embroidery and some sun fading). It was such a great find! The silk is a dusty purple color with bronze sequins and gold, bronze, and copper couched embroidery patterns. I adjusted how I cut my pieces to use the embellishments to my advantage, which had the added advantage of meaning I didn't have to finish a single edge! Bonus! 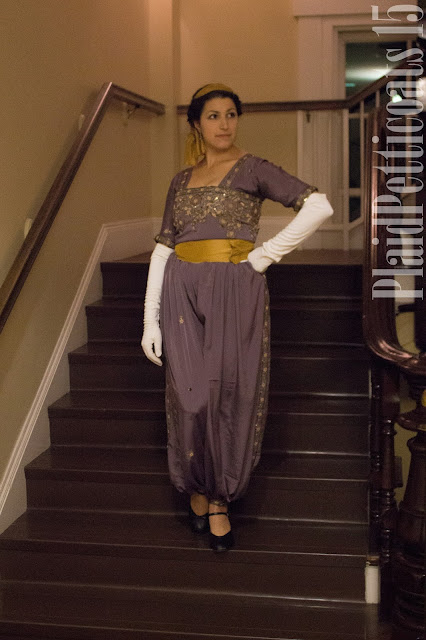 The pants are just two big tubes with a curve at the top where they're sewn together and then gathered into the waist and ankle. The waist is cotton, and there's a structural cotton bodice that the embellished sari fabric is sewn to (and then also gathered into the waist). The sleeves are basically rectangles where half the rectangle is sewn into a tube and the other half is attached to the front and back of the bodice. After attaching the sari fabric, I added a pleated gold silk waistband to break up the purple a little bit.

In the end I was really happy with the way this turned out! I have to admit, it was really weird wearing pants--both because normally I would be wearing a ballgown at a ball, but also because I don't wear pants in normal life. But also fun! I especially loved the way the pants moved when I danced.

And look! There's evidence of it! 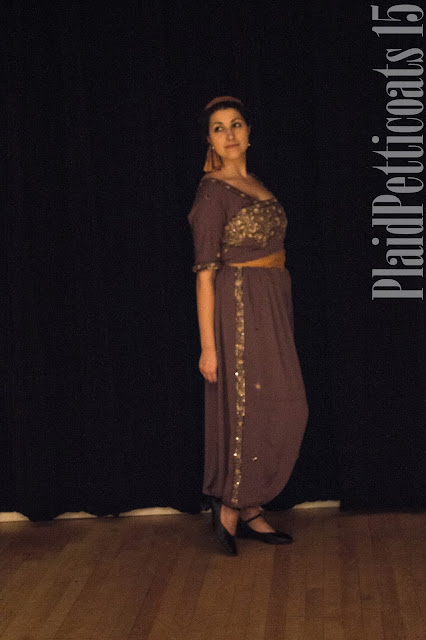 And just like Lady Grantham, Quinn judged my scandalous attire!