So, I went to a ball this weekend, and it was lovely!  The fabulous Antonia precepted, and I not only learned some really cute dances, did a dance or two I had done before, but also learned regency 'rights and lefts,' which is a figure I am familiar with in later 19th century dancing as well as in SCD, but never in its earlier regency form.  I also wore the white dress I worked on over winter holidays, and it was nice to have something pretty and period to wear...however it still needs a bit of adjusting, as well as closures (I had to be sewn in again...oops!), but I think I may just make a new dress this summer rather than adjust this one.  The main reason for that, because I really do like this dress (and it's practical, as it's cotton-yay breathable fabric for sweaty dancing!), but as you'll see below the delicate embroidery doesn't really show up super well.  I'm reading through Gail Marsh's 19th Century Embroidery Techniques to learn some new stitches and then I will make a NEW SUPER IMPROVED ballgown with an embroidered hem.
Anyways, I had so much fun dancing at the ball that I didn't take any pictures! Luckily, I went on a 1812 road trip with some friends from college to drive from New York to Salem for the day, and the lovely Hailey documented the endeavor with a much better camera than mine.
So as I've already written more than I planned on, I'll let the pictures do the rest of the talking for me. 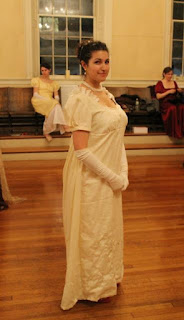 Unfortunately, I can't locate the picture of my shoes with the rosettes and ribbons added, but they were lovely...until the ribbons fell off.  The rosettes worked well though! It was quite a lovely evening and I'm so glad I was able to go.  Counting down until Returning Heroes in March...
Posted by L. R. Stern at 5:18 PM