When I first discovered how fabulous Julius Leblanc Stewart's work is, I was not surprised to learn he was a contemporary of John Singer Sargent, who is one of my favorite painters.  Stewart's work has a similar quality to it but his subjects and use of light differ from Sargent's.
Stewart was born in Philadelphia in 1855 but moved to Paris with his family when he was ten years old.  Following my current love of all things 1870s-90s/Whartonesque/Belle Epoque/Picnic-related/shiny, Stewart's peak was during the 1880s, and his group outdoor scenes are my favorites so far.  I am constantly surrounded by artistic people, and I would love one of them to suddenly be inspired to take all of us sailing and then paint in. Hmm...

Here are some of my favorite works by Stewart, for your enjoyment and inspiration for the upcoming sunny weather!


This last set of images all feature striking parasols, and I feel particularly drawn to them:

"A lady...does not place her weapons on the table!"

I'm not a huge sports person, but of the sports I have attempted throughout years of required gym classes, summer camps, and family time, I've discovered that I do like things that involve weapons--especially archery.  I also love princesses. And Disney fairytale movies.

Last year I lived in Scotland, and fell in love with the history of the country (as well as the dancing and the tartan).

So it makes perfect sense that I would be more excited about the newest Disney/Pixar movie, which is about Merida, a Scottish princess who does archery, than I am about graduating.  The newest trailer comes out today, and it looks awesome!

Email ThisBlogThis!Share to TwitterShare to FacebookShare to Pinterest
Labels: just for fun, movies

I'm totally in love right now with the work of Julius Leblanc Stewart, and I'll be sharing more of his paintings with you soon...but I just couldn't wait for this one!
I ran a ball as part of a literature final project on Thursday, the traditional college Spring Formal was Friday, and today I am running the office 9-5 while trying to finish one of my last papers.
So I apologize for the lack of quality updates...but I hope you will forgive me!  In the meantime, please enjoy this painting by Stewart, and understand that this is me right now, except with a pile of homework where her letter is.

This isn't truly much of an update, given that I took these pictures weeks ago...but back before my final projects took over all of my waking hours, I started embroidering my new 1860s corset!  I mentioned this in my first embroidery inspiration post, but I fell in love with embroidered color-on-color underthings, and this corset is modeled on this extant one in the Met collection: 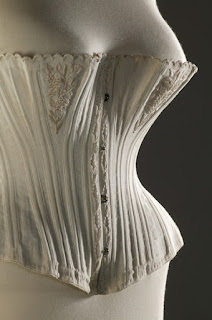 My corset will (eventually) have vines and flowers on the bust and hips and vines with buds on the back eyelet area, but I"m just starting.  Hopefully as soon as everything is turned in next week I'll be able to actually get more done. 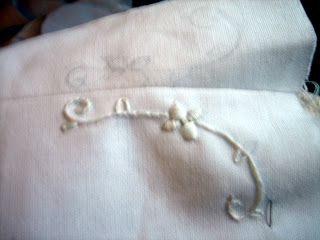 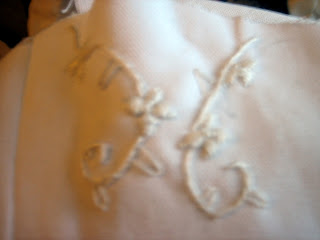 Padded satin stitch is super time consuming, but it may be my new favorite thing.
Posted by L. R. Stern at 10:14 PM No comments:

Email ThisBlogThis!Share to TwitterShare to FacebookShare to Pinterest
Labels: costuming

Nice Work If You Can Get It

My mother and sister are visiting for the weekend and last night we went to see Nice Work If You Can Get It, which is currently in previews at the Imperial Theatre and opens this Tuesday.  It was absolutely fantastic!  And quite appropriately for my recent blogging kick, featured a 1920s playboy and his teddy bear.
See for yourself!  This is the show's official reel, and the bear can be seen (in the arms of Matthew Broderick as Jimmy Winter) at about 1:31.

The musical is a remash of original 1920s and '30s Gershwin work--the book is based on an original Gershwin musical from 1926, and was written by Guy Bolton and P.G. Wodehouse (author of Wooster and Jeeves!)--but features a new book by Joe DiPietro (book for Memphis).  DiPietro does a fabulous job giving the musical a period feel (bootleggers, a society wedding, and highjinks abound) but blends it with modern humor so it played extremely well in a full audience of very mixed ages.

Obviously, the flapper costumes, opening speakeasy/burlesque scene, and generally fabulous choreography caught my attention, but I also really enjoyed the story and how well it fit with the Gershwin score.  There were some moments that felt delightfully 20s/30s (when the chorus girls appeared as bubbles from Eileen's bubble bath to join the song) and some that were more truly modern (actually, one of my favorite moments in the show: Kelli O'Hara as Billie sings "Someone to Watch Over Me" while guarding her bootlegged stash with a shotgun) but the whole show blended together into an entertaining adventure full of swinging brass, quicksteps, Charlestons, and rhinestones.

I'm a sucker for good music and a happy ending, but this really was the cure for end-of-semester stress.  The artistic team really seemed to have a sense of the aesthetic of the period, and I definitely appreciated that.  Obviously everything had a modern Broadway flair, but there were winks at the past that made it seem like this could almost have been a revival of a 30s Gershwin production.


I suppose this is all a really long-winded way of saying that I loved the show, I want to go dance in a speakeasy, and that if you are in the NYC area anytime soon try and see Nice Work!
Posted by L. R. Stern at 12:58 PM No comments:

Unfortunately I wasn't able to make the Titanic events in this weekend, but I did have a wonderful visit from a friend who I met while in New Scotland (the Edinburgh University Scottish Country Dance Society) last year.  Even though I couldn't foxtrot and tango, it was brilliant to let loose and practice my four step fling.
I miss her already!

I look like an injured sheep compared with these girls, but these are the same steps I know.

Aren't they fab? I shall have to keep practicing!
Posted by L. R. Stern at 3:26 PM No comments:

Aloysius and Other Bears of the Early 20th Century

"I knew Sebastian by sight long before I met him.  That was unavoidable for, from his first week, he was the most conspicuous man of his year by reason of his beauty, which was arresting, and his eccentricities of behavior which seemed to know no bounds.  My first sight of him was as we passed the door of Germer's, and, on that occasion, I was struck less by his looks than by the fact that he was carrying a large Teddy-bear." (Brideshead Revisited, p28)

Charles, the narrator in Evelyn Waugh's novel Brideshead Revisited introduces his readers to Aloysius (his friend Sebastian's bear) almost as soon as we meet Sebastian.  As I also took my bear to college, I found this particular eccentricity of Sebastian's quite endearing.  Following on my theme of picnics, I've had a recent desire to have a 'Teddy Bear Picnic' in honor of the song, which was first published in 1907 (although the lyrics weren't added until the 1930s) and because I just really love stuffed toys.
So I went on a search for pictures of bears from the early 20th century...and found this postcard: 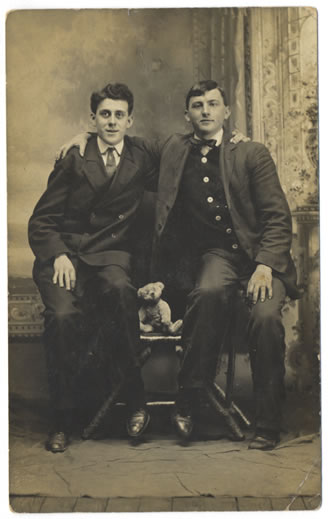 While, given that this was a postcard, it is probably staged, I still love it.  Doesn't it remind you of Brideshead?  Which got me thinking some more about Waugh's novel.  Did you know that Waugh based Aloysius on a bear named Archibald Ormsby-Gore?  He belonged to John Betjeman, who brought Archibald to Oxford with him (along with his stuffed elephant Jumbo).  Betjeman and Waugh were friends while at university together.
As a student who also has a bear with me at school, I think this is absolutely fantastic.  It also turns out that  another special bear appeared as Aloysius in the mini-series.

Here is the 1981 cast with their bear:
Aloysius was played by a bear named Delicatessen, who belonged to one of the designers.  He was made in 1907, about the time a childhood bear of Sebastian's would have been manufactured as the book is set in the '20s!
The next bear I adopt might have to be named Archibald, in honor of Betjeman's.  Click through to see more fabulous bears!

So as the weather is beautiful and I'm stuck inside all day, I find myself once again dreaming of the fabulous afternoons I want to spending picnicking this summer...preferably in the Public Garden, which was established in 1837.  I haven't actually taken a swan boat ride since I was little, but watching them is certainly fun!
In honor of summer picnics, I've been collecting references.  Here are some favorites! 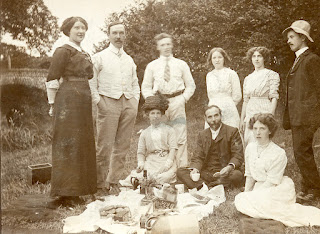 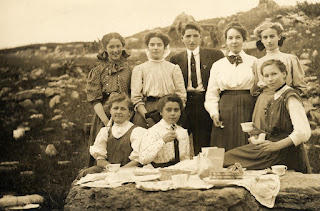 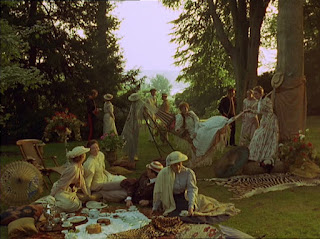 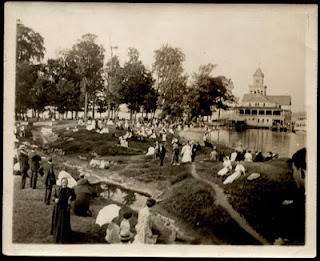 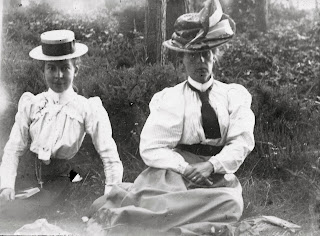 As a supplement to my last post, I came across these ladies while looking for croquet-themed art and couldn't resist.
Let's hop to the 1950s for a bit! 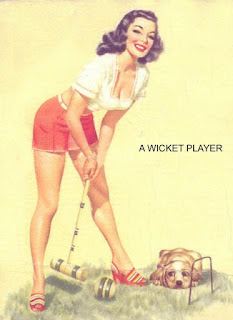 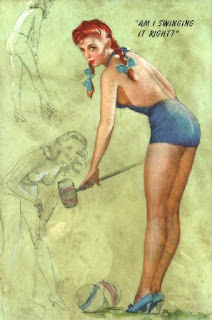 As school is a bit overwhelming at the moment, I needed a little sunny moment of distraction.  I am so looking forward to playing croquet this summer!  Here are some paintings that I am feeling particularly drawn to this evening...


This one is a little late, but it has tartan so I couldn't resist!

It might be time to trim a hat in the leftover tartan cotton from my drawers.  On with the tartan wardrobe!
Posted by L. R. Stern at 11:36 PM No comments: