The thing is, I should have taken August off. In July I moved, took a summer class, made a dress, and performed, and just generally was awfully busy. But then I didn't take August off--I got on a plane to Denmark, wore the dress, danced my feet off, took a business trip, went to a convention, and finally started to unpack. All of this to say that when my fall semester classes started, I kind of crashed. I had my heart set on a new dress for a ball next week...and I haven't started it. Life happens. Stay tuned, and I'll start that dress eventually!

But in the meantime, I am a bad blogger and I'd truly meant to tell you more about the dance week I attended. I don't have a ton of pictures, because it was mostly modern clothes!

In fact, mostly it wasn't even cute modern clothes! I spent the majority of the week in leggings and batman shirts (just because I happen to own a lot of athleticwear with the bat symbol...I like to be batgirl when I work out), and that was great. Because the dancing was hard--I had to think a lot, and move a lot, and it was glorious.

The week itself is run at a Danish folk high school, a boarding arts school built in the early 20th century. When it was built, it had the largest gymnasium in Scandanavia--perfect for dancing! Staying in the school was a nice chance to really get to know some of the other participants, as we danced together, ate together, sang together, and then all trudged up to bed.

The dancing for the week was all based on the theme of "The Lancers," a quadrille that appears first in the 1810s and stays (in various forms) popular through the 19th century. In fact, a version of it is still danced as a folk dance in Denmark today! Each teacher focused on a couple of dances throughout the week, all of which tied back to the Lancers in some form. The teachers also each took a turn leading morning meeting: lectures on their dance research and the evolution of the dances we were learning. It was a great opportunity to think about dance history, how dances evolve over time, and to study through movement. We also had live music during the classes, in the evening, and for the balls. Quite a luxury, and so nice! The musicians made classes a lot more lively, especially towards the end of the week when we were all feeling a bit worn out.

Between all the dancing were a couple of sight-seeing trips, a lot of ice cream (I love trying ice cream in every place I visit! and Denmark puts marshmallow sauce and jam on theirs--yum!!), a lot of tea, and new friends...and then, of course, the final ball.

The ball was held in Christiansfeld at the Brødremenihedens Hotel, a historic building that has been in the town since about its founding (1773). Over the centuries the royal family has stayed there when visiting Christiansfeld, and it was the site where the Danish and Prussian colonels signed the cease-fire agreement ending the Second German War in 1864.


Before we danced, we ate (this was somewhat a theme of the week). Dinner was held in the hotel dining room, which was elegant and lit with real candles. Apparently Denmark is known for its national love of candlelight, and this was a really cool thing to experience. It definitely changes the atmosphere!


Honestly, I didn't dance very well at the ball because by the time we got there I was tired and hot and my brain was melting out my ears from all of the hard thinking I did during the week. But it was still a lot of fun, and I learned SO MUCH. I'm so glad I was able to attend! So I'll leave you with some of my favorite pictures, captured during a break from dancing. 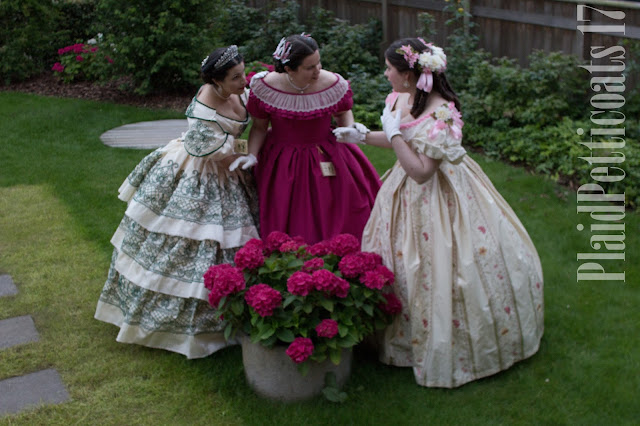 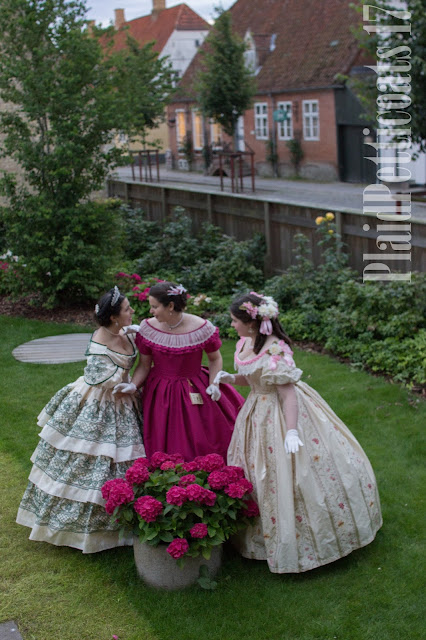 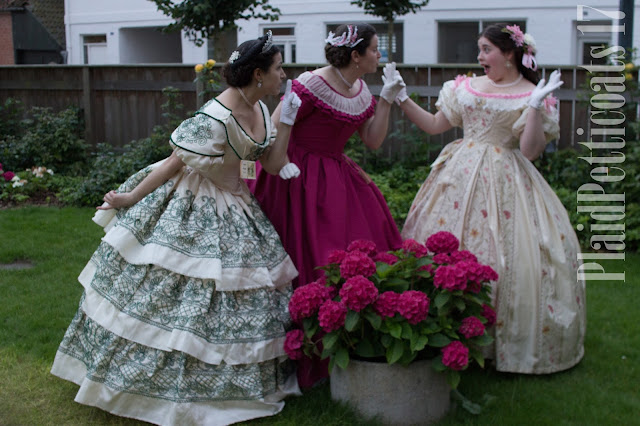 Here's to picking back up and starting some actual sewing again soon!
Posted by L. R. Stern at 9:19 PM No comments: