I don't know why, but "gaggle" just seems like the right term for people in 1830s clothes!

Through a mix of intention and serendipity, I wasn't alone on my 1830s adventure for Fezziwig's this year. A bunch of us ended up taking a break during the same dance to take pictures, so with help from an obliging gentleman we captured to shots of a bunch of 1830s ladies. I think what I love most about these images is how complimentary our ensembles are while all being totally unique to our personal styles. 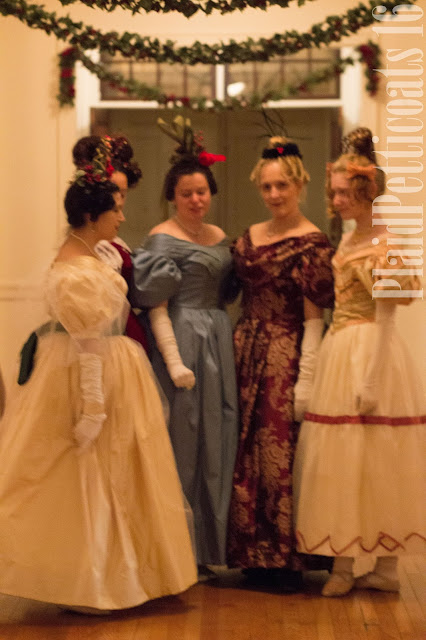 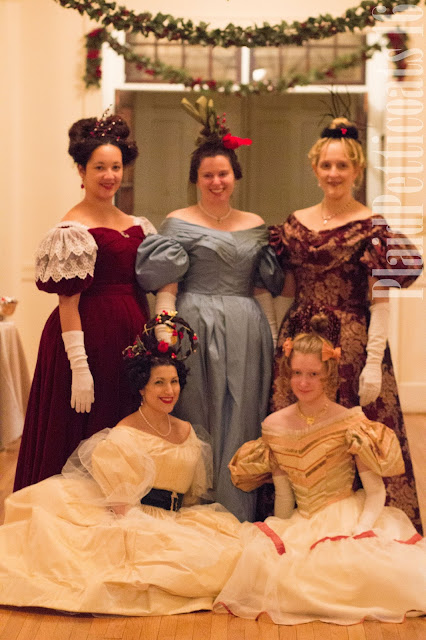 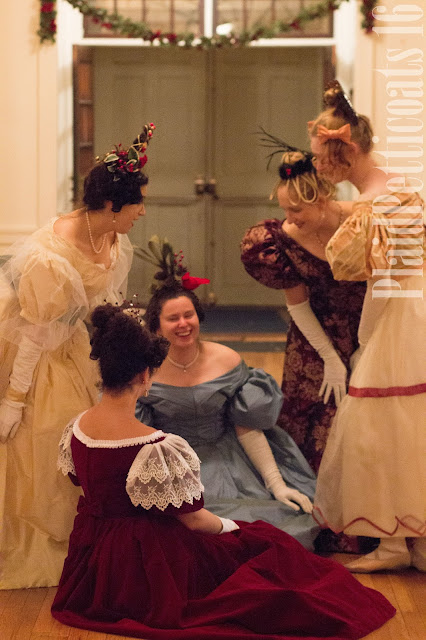 So there you have it! I'll be away over the holidays for the first time, so things will be a bit quiet here until the new year. So have a very happy holiday season, and best wishes for 2017!
Posted by L. R. Stern at 7:51 PM 4 comments:

Put a Bird On It

Last Saturday was Fezziwig's, and the first wearing of my 1830s dress! I was so pleased with the way this came out, from my petticoats to my hair. Best of all, while my hair definitely started to get heavy late in the evening, my dress was super comfy all night. That doesn't happen very often, usually something isn't sitting right, or pulls, or slides off...but not this time! It was a great feeling! 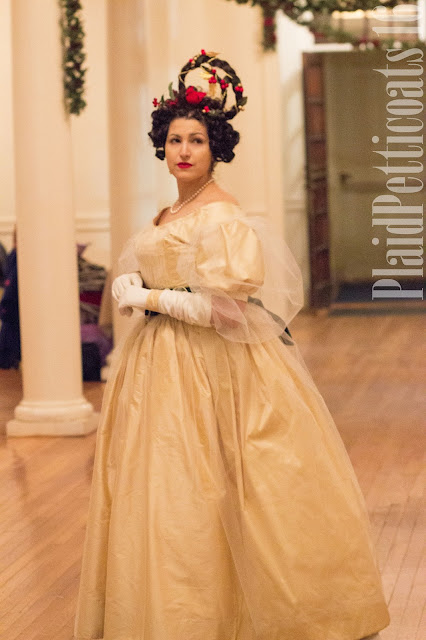 I've previously posted about the inspiration and construction of this dress, so all that's left to say is that I was quite pleased with my decision to use tulle as the sheer over-layer. It had an airy, invisible quality that made me feel like a Christmas tree topper.

My truly fluffy 1830s silhouette is thanks to a "carrot" bustle pad (like these originals) and a very not historical stiff net a-line wedding crinoline I bought on ebay for super cheap. When I first tried it on the net started about two thirds down my hip (because modern styles call for that), so I took it up with safety pins just before the ball to bring the fluff right up to the waist, where I wanted it. I threw a thin cotton petticoat over the top to smooth things out (I have a couple "all purpose" pettis that are wide enough enough for 1860s hoops but hemmed for wear without as needed), and that was that! 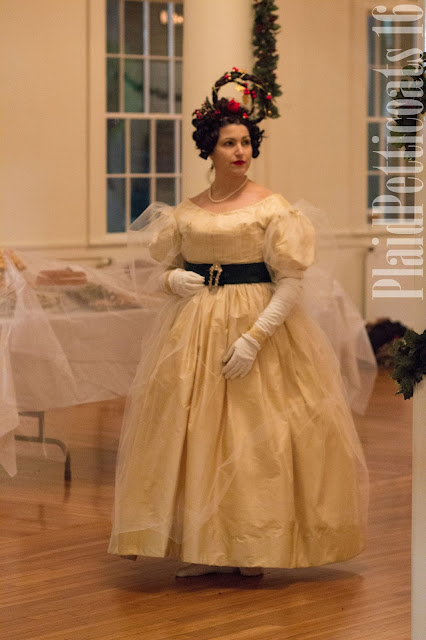 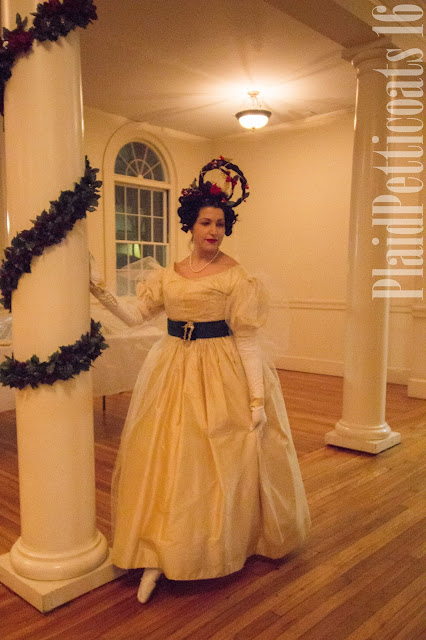 And then of course there was my hair, which was the bird on top of the tree. (maybe? no? not as good as icing on the cake, fine.) 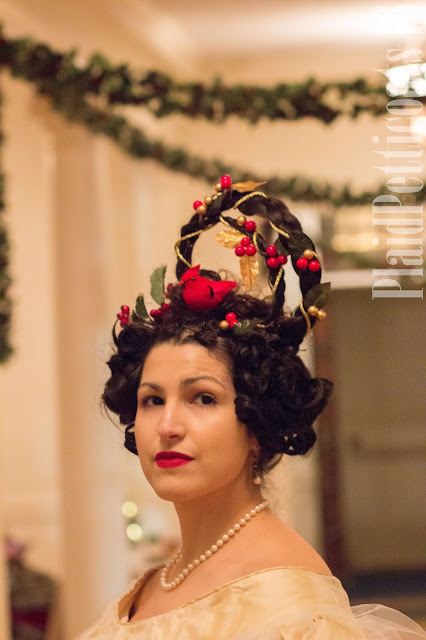 The braid wreath is made of jewelry wire with fake hair hot-glued to it, then decorated with gold and red holly berries from the Christmas clearance bin at JoAnn's. It's pinned in and surrounded by my actual hair, which is curly so it's easy to blend. My plan had been to have a vertical loop in addition to the braid, like this fashion plate. After a collapse into a gluey, plastic-hair mess, the plan had to change. But I think the addition of the decorations make up for it, and maybe I'll try loops again for next time! 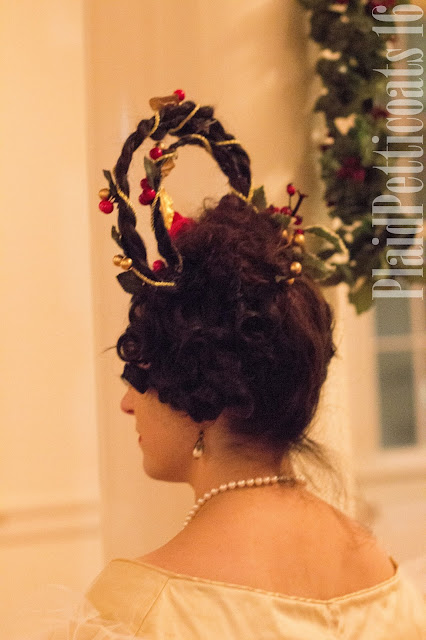 The side curls are bangs that I curled based on the Laced Angel's Romantic hair. They worked really well, because they saved my hair for anchoring the giant braid. The bird was a last-minute addition after a friend decided she didn't need it. It was the perfect touch!

I'd love to wear this again for a photo shoot, because I was so busy running around setting up/hosting the ball that I manage to look a bit rumpled in every picture...not to mention all my photos came out weirdly noisy. Harumph. But I was so happy wearing this dress, it doesn't much matter. I look forward to styling this dress in new and different ways (a tartan sash must happen, of course!) in the future.

Oh--and Mom's dress came out great too! She looked awesome.

A Little Bit of Shine

One last progress post about my 1830s ensemble. I realized pretty early on that I wasn't going to get my act together on a sash like my inspiration painting, because at the point where the dress is real silk I want an actual silk tartan for the sash. And real silk tartan is hard to find over here! So I decided to pause until I could get exactly what I wanted, and in the meantime I am making a velvet belt with a buckle to wear for the ball. It will also give me some options for future wearings, because options are great.

I did some internet searching, and found a lovely antique belt buckle on Etsy that was a good, sort-of-rectangular shape. It was super cheap, probably because it was so tarnished it was basically black! So after ensuring it was actual brass (and not just brass plated), I did some scrubbing with lemon juice and baking soda. What a difference!

It's amazing what a difference accessories make. It really brings the ensemble together!
Posted by L. R. Stern at 8:00 AM 3 comments:

"Funemployment," or, The Luxury of Indecision

I am very excited to say that I got a new job, and I had a whole week off in between! So this week I've been enjoying the luxury of working on projects and finals without anything else on the books--just get up, sew, do homework, sew more, etc. Glorious!

This includes two big developments: I am almost done with my 1830s dress, and I decided to make my mother an 1850s outfit for the ball. So I've been hard at work! Both dresses were tried on for the first time this evening for last alterations, and I am unspeakably pleased so far. I promise to post detailed pictures once they've been worn and photographed, but in the meantime I have some cell phone progress shots. Because I had time to think about taking progress shots! And only swore a lot of the time but not all the time! Ha.

Before my week off, I actually did some significant work on the bodice beginning in late October, because we had sewing circle. Over the course of the October and November sessions I mocked up the pattern (TV455), made adjustments, and assembled the actual bodice so that I could have help fitting the darts. I find it much easier to have someone do that while I'm wearing the bodice! Then I cut an overlayer out of my bridal tulle that was wider across the front and back than my actual bodice (but actual size around the arm holes). I matched the arm holes and shoulders of the bridal tulle, and then painstakingly created tiny folds to pleat up the excess width. I tacked each tulle pleat to the silk bodice in three places (top, waist, bottom) as invisibly as possible, then bound the neck with piping and added a non-tulle-d waistband, which further lock down the pleats.

I also created long tulle oversleeves and short puffed silk undersleeves and attached those over Thanksgiving, so the bodice was in pretty good shape before my week off (which also never happens). I'd also already cut and assembled the skirt, so I had a large tube ready to go. This is when that indecision starts--I originally planned to make a padded, three-dimensional rolled hem in silk at the bottom of the tulle overskirt. I messed this up right away by sewing it together upside-down, and had to pick itty-bitty stitches out of the tulle (which took forever and was absolutely miserable), then once I'd fixed it, stuffed the tube, and sewn it shut...I decided I didn't like it. It seemed clunky, it wouldn't lay right, and it just made me sad! So I slept on it, and didn't touch it the next day. Instead, I worked on my mother's dress so that I felt good about progress. When I went back to my dress, I decided that yes, I really did hate the overskirt. So I made an entirely new one (luckily I had enough tulle) with no hem decoration and basted it to my silk. The two layers are cartridge pleated as one to the waistband, and the excess tulle (folded to the inside to adjust the length) adds some nice volume--almost like an extra petticoat.

Speaking of cartridge pleating...I did that! I usually don't have time, because it is hugely time-consuming. But I love the way they make the skirt hang, so since I had the time I took advantage of it!\. To further help give the skirt some body, I used craft felt to pad the skirt hem (based on this blog post). I sewed my felt to the silk as a facing, so it was super easy, lightweight, and rather stiff. It's not perfectly accurate, but not horribly off either. Definitely a trick I'll keep in mind for future skirts.


I've also started finishing all the little bits, like putting cuffs on the sleeves and bias-binding the sleeve openings. I still need to sew down the neck piping and add closures, but otherwise this is basically done with a whole week to go until the ball! INSANITY. It's a pretty great feeling. (or it would be, but also finals. Still, better than sewing and finals...)

My mother's dress is in pretty good shape as well-the bodice is done except for closures and hand finishing, and has been passed off to Mom to finish on her own this week. I measured the skirt for length this evening after assembling and hemming it over the week, so now I can adjust accordingly and attach it to the waist band. Then that's it, she's done too!