What a busy month! And it doesn't really end...I'm in the midst of gearing up for the Regency Intensive Weekend, which will be a ton of fun! In the meantime, though, I'm taking a bit to reflect on Returning Heroes. It was a lovely evening of 1860s dancing and shenanigans...all done in my new pink plaid! I'm actually pretty happy with this dress, although it still needs a little bit of adjustment.  Better to say it with pictures, though! And in case you are burning to know why pink plaid, and not another tartan, stay tuned--there's another 1860s tartan post to come. 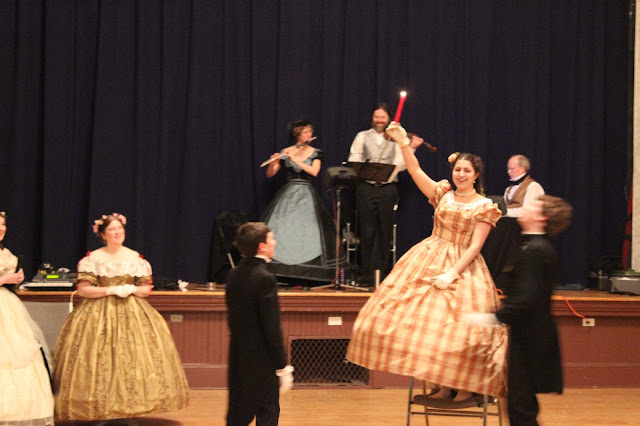 It was a lovely ball, and even though I love all the periods we do, 1860s will always have a special place in my heart. I certainly enjoyed the evening, and it seems like everyone else did too--I call that a success.

It's been a while, but I'm picking up where I left off in my series of posts on tartan in women's fashion! If you're new to the party and interested in pre-1840s, you can check out my earlier two posts on the Regency and Walter Scott revival at the links.

The Waverly novels by Sir Walter Scott romanticized life in the Scottish Highlands and created an image of brave clan members and determined heroines all bedecked in tartan. While tartans, or woven plaids, had been a part of Highland culture, Scott's novels and the tartan fashions that followed brought a relatively small, rural, old (medieval even) pattern to the heights of London fashion. As Scotland struggled politically and economically to maintain a national identity within the quickly industrializing mid-19th century British Empire, the romantic image of clan members in kilts and maidens in fields of heather enchanted English ladies. One particularly influential lady to be enchanted by the romantic promise of the Scottish countryside was Queen Victoria herself.


Queen Victoria and Prince Albert were so charmed by the Scottish highlands that they built a castle there, called Balmoral, in 1853 (the estate was purchased in 1848). While decorating, Albert designed several different tartan setts, and Balmoral was tartan from floor to curtain.

Balmoral became a vacation playground for the monarchs and their friends, and the appropriation of many elements of Scottish tradition (such as the wearing of the kilt) were adopted by Balmoral residents during their stay. According to the Scottish Registry of Tartans, Queen Victoria had a skirt in the Balmoral tartan, and a similar sett was woven for her children's clothes. Victoria was also quite fond of the "Dress Stuart (or Stewart)" tartan, and had her own version created with a red stripe added.
This particular tartan was featured in both Victoria's clothes as well as her friends--the Princess of Wales wore it to a ball at Balmoral Castle in 1863 (which was the inspiration for my '60s ballgown last year):
Really, though, Queen Victoria started a trend for all kinds of tartan, not just her chosen few. Even before Balmoral, Victoria was already a fan.

The incorporation of tartan (or really, plaids in general) into women's fashion is evident in extant garments, photographs, and fashion plates from the period, which demonstrate a range of applications for the pattern. While Victoria was certainly a trendsetter, the use of tartan spread to America, too; its roots in Queen Victoria's Scottish infatuation (or the "Balmorality" cultural appropriation, as scholars have called it), is still referenced in the popularity of the Royal Stuart tartan.

While tartan must be woven, and can therefore be a variety of fabrics, it is most commonly wool or silk. Silk being so fabulous for dresses, it is most likely that was what Victoria favored. However, we do know the woolen variety of tartan had another use at Balmoral: keeping ladies warm! A fabulous anecdote from one of Queen Victoria's ladies' maids reveals that the Duchess of Manchester, at least, owned a pair of scarlet tartan drawers. How fabulously scandalous!
Plaid was not new in the mid-19th century, but Queen Victoria's status as a trendsetter, combined with her infatuation with the romanticized Scottish Highlands, were a dynamic pair, and it's no surprise that tartan (and plaid in general) was so popular during her reign. I bet those ladies on picnics at Balmoral were quite a sight!

I am running around like there's a fire (although actually there's an impending snowstorm. again.), but it is all exciting things you will see soon! I had to pause and share a video from the Regency Ball!

During the ball members of the Commonwealth Vintage Dancers performed The Cottage Bonnet, which is a super fun dance that involves some pretty neat steps. We caught it on video, and here it is.

(and if you're in the Boston area, or able to stay for a weekend, you can learn the Cottage Bonnet too at the Regency Dance Weekend in April)
Posted by L. R. Stern at 7:10 PM No comments: