This weekend I had a crazy adventure drinking tea and discussing women's suffrage at the America's Hometown Thanksgiving celebration in Plymouth. Part of the event is a "portal to the past" living history village, where visitors can explore what (mostly military) life was like from the 17th century to the 20th.

We were going to be an all-female group (our dudes are members of the Salem Trayned Band, so they were busy in the 1630s), so we decided to spend the weekend in the 20th century as 1914 suffragettes. We had tea, sang suffrage songs, and handed out yellow "votes for women" ribbons. It was so much fun (but a little chilly)!

I wore the jacket and "hobble skirt" I made last week, which turned out to be pretty cozy (yay wool!), a fur wrap I also made last week, and my Tavistock button boots from America Duchess. I bought them this summer, but hadn't had a chance to wear them, so I was super excited! I think the final silhouette was pretty authentic, and it was really different from what I normally wear. I need to finish the jacket, and maybe add a belt (I don't really like wearing the tube look), but in general this worked well and was quick to throw together. 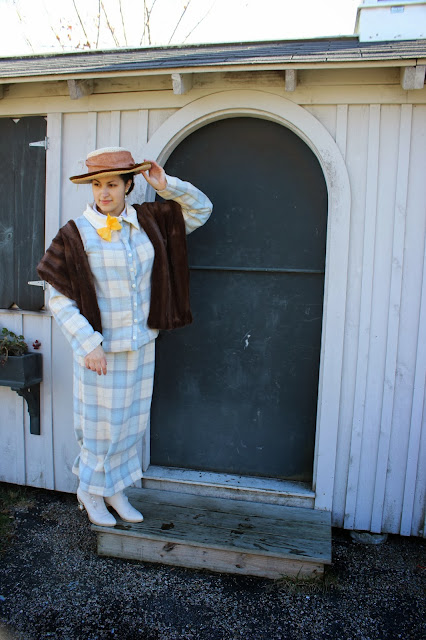 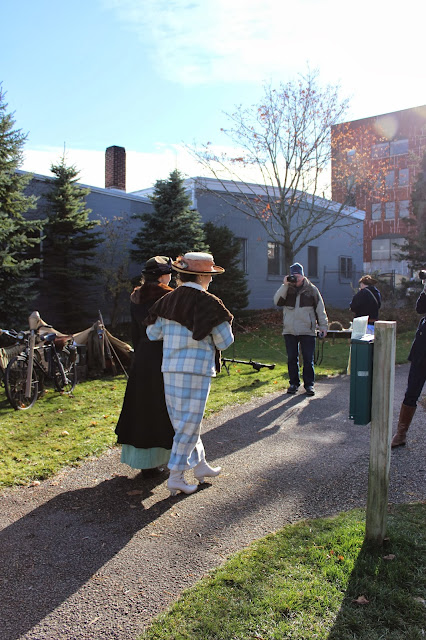 I was also really excited to tromp out my Tavistocks, and Quinn and I took the opportunity to take some shoe pictures. I'm glad, because now the next time I have to psych myself up for the 10 minutes it will take to button all the buttons, I can look at this picture and remind myself how fabulous they are.

The one downside of the hobbled look is that it actually well...hobbles you. I had to take very small strides and couldn't actually move very fast or far without a lot of effort.  It meant that I ended up looking awfully dumb as I bopped along trying to keep up with everyone, and it was extra exhausting. I also ended up getting a couple of rides from the golf carts that were shuttling people to and from the event, and they were the best. Thank you, golf cart men.

Actually, one of my favorite interactions of the day involved the golf cart man who drove our chairs, tables, tea equipment, and me to the site. When we were driving over this exchanged occurred:
GCM: Do you know where your spot is?
Me: no...we're somewhere in the 20th century, but that's all I know
GCM: drives into the park and stops in front of the map Find the 20th century!
Me: spots the 20th century area, and our spot I found it! The 20th century is over that little bridge, and then the suffragettes are the the left.
GCM: well, then off to the 20th century!

So with that, off to the 20th century we go! 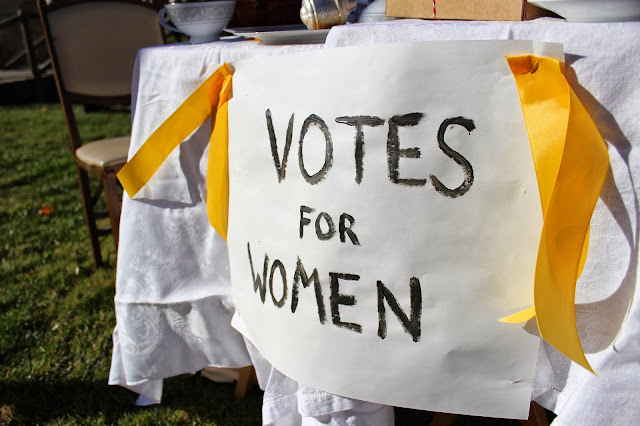 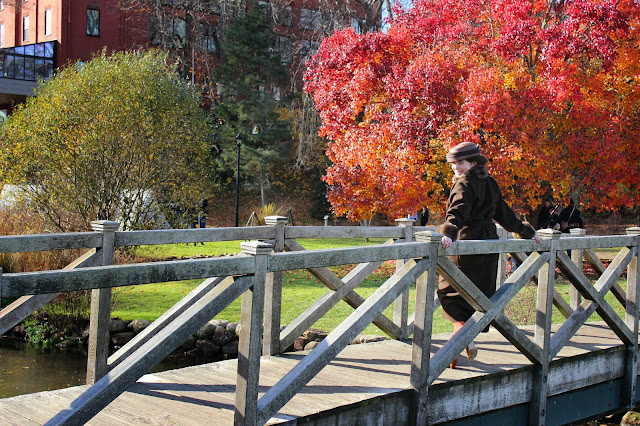 Every now and then I have one of those days where I wind up feeling frustrated, tired, and unaccomplished. I got into the habit of using bling as a mood boost in college, and even though technically I"m an adult now I still do it. Last Friday I came home from work much later than expected feeling awful, only to discover my new tiara had arrived several days early!

So I did what I always do: I baked in my new tiara. So enjoy this lovely Friday (while I'm scrambling to finish sewing for tomorrow!), and this goofy picture of me...

Between moving and my machine needing repairs, I haven't done any serious sewing in the past couple of months, but I'm eager to get back into the swing of things! First on my list is a 1914 outfit with come pretty plaid wool I picked up this fall--yay, outerwear! I've been amassing ragtime inspiration lately because it's time to start prepping for the centennial of the beginning of WWI. In case you've had other things on your mind this month besides Archduke Ferdinand's upcoming assassination anniversary, here's a brief reminder courtesy of the TV show BlackAdder.

Ok, so it didn't happen quite like that, but you get the idea. What I've actually been most drawn to for sewing is the juxtaposition in 19-teens silhouettes made popular by French designer Poiret: drapey, fabulous coats (often trimmed in fur) above narrow, sleek skirts. I'm planning a coat/skirt combo as my next sewing project, to be worn in a few weeks in Plymouth.


Mine won't be quite as dramatic (or drapey) as the French fashion plates, because I'm not a Parisian fashionista and it'll be cold in late November. But I am aiming for the narrow-skirted shape that was so popular at the time. It's a truly distinctive look, and one that's quite different from a lot of the clothes I'm used to wearing. It'll be an adventure to see if I can make it through the day without ripping a seam!

Here are some of my inspiration images. I'm excited to start sewing!

I have cream and plaid wool, brown fur...it's time for some modern fashions! (well, modern for me...)