In the midst of moving, I took a 10-mile break to participate in the spring Boston Tweed Ride. Tweed Rides have become quite a trend in recent years, such that there's even a wikipedia page about them! Our local ride wound its way along the Charles River and amounted to about 60 people in a range of pretty fabulous outfits. There was also a lot of bicycle diversity: some people had original bikes from the mid-20th century, others reproductions (including a penny-farthing!), others modern road or mountain bikes, and some people were even on Hubways (our local bicycle rental program, a bit like zipcar for bikes!). It was a lovely afternoon, and I had so much fun!

My family rode bikes all the time when I was little, but then I stopped riding for a while and am just now getting back into it. It's definitely faster and easier than driving sometimes in Boston.

I didn't get many pictures, being on a bicycle, but here are the few that I captured! You can see more at the event's Facebook page. 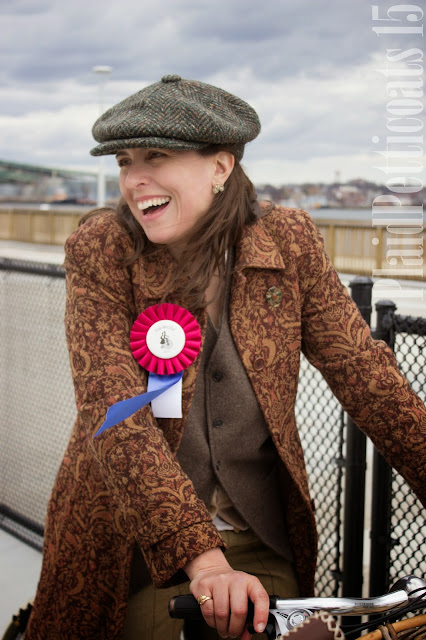 I've been a terrible blogger lately, because life has been a little crazy. In addition to some family things, I unexpectedly found a new apartment, signed a lease, found a subletter for my current apartment, and moved.

BUT, the new apartment is awesome, and as I've started to unpack I've been reminded of all the plans I had for this summer, and all the projects I wanted to do. (Of course, it's also inspired a lot of new projects, but someday I'll do them all, right?) So when I finally feel settled and am not longer spending my free evenings building furniture, I will be right back to it.
In the meantime, the new apartment has a sweet black and white tiled floor and mirrored closet doors and screams late 50s/early 60s to me.

We're not going all-out vintage, but the period style is there in general shapes and colors and it's pretty great so far. So to keep you entertained while I crawl back from blogger limbo, here are some pictures from the opposite direction: the "Monsanto House of the Future," a Disneyland attraction from 1957-1967 that represented what homes in the future (c.1986) would be like.

The display was co-sponsored by the Monsanto Company, MIT, and the Disney Imagineering team and featured a house with huge glass windows, a microwave, a large wall-mounted television, adjustable surfaces (the height could change on the kids' sink!), and a whole lot of plastic (including the exterior!). While plastic isn't the building material of choice, a lot of the other features of the house really have made it into everyday life, and the "retromodern" furnishings are making a bit of a comeback. So here's the House of the Future, firmly rooted in the mid-century: