Goodness, it's ridiculously warm for this time of year!  In fact, all this unseasonable weather has got me thinking about clothes for this summer.  In particular, things to wear out for picnics and strolling around the Boston Public Gardens.  I'm working on corsets and petticoats this week, but after a cutting marathon this morning I decided I really ought to have a a nautical skirt to add to my wardrobe, as I tend to wear sailor dresses all summer anyways.
So this post originally started as research on nautical summer wear for the turn of the century, but then I just couldn't stop looking...so it expanded into summer sportswear in general.  Yay for croquet!

And here are some other lawn ensembles:

I know this one is super small, but she has a be-pom-pom-ed beret! so cute!
And finally, the original images for this post--on the ocean by yacht, boat, and beach:

I came across this next image while looking at swimwear, and while I plan to hit the beach as much as possible this summer, I certainly hope this doesn't happen!

Email ThisBlogThis!Share to TwitterShare to FacebookShare to Pinterest
Labels: research

I have a tendency to strike over-the-top poses when I'm fooling around, a habit I blame on performing in the works of Gilbert and Sullivan annually from the fourth grade through high school.  Unfortunately for my dignity, people occasionally catch me at it while holding a camera, such as at Returning Heroes last week.


Anyways, I happened across these pictures of British burlesque performers from the 1890s.  The 19th c. form of burlesque (which, as you can see, still involved cute girls and not a lot of clothes) was a form of satire in which current politics, celebrities, trends, etc. were mocked with sketches and popular songs with re-written lyrics.  In fact, many of the tunes used were originally from the light operas of G&S.  As you can see, my penchant for silly posing isn't new. 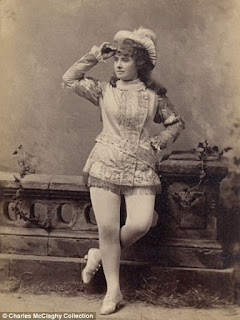 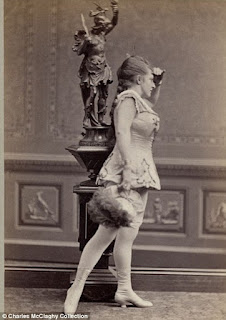 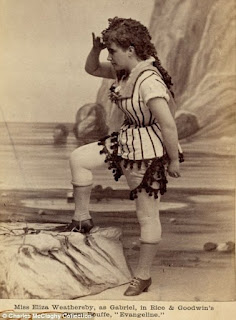 As I mentioned in a previous post, I recently purchased Gail Marsh's book 19th Century Embroidery Techniques and have been practicing a small flower design from it to work on some stitches.  I've been practicing some form of needlework since I was in elementary school, when my mother taught be basic hand sewing and counted cross stitch (which she is really fantastic at!), but I've never actually attended to the styles associated with decorative embroidery in a particular period.  The biggest thing for me to think about has been scale: I'm good at the small, delicate work but not so much at the bigger things, and embroidery for costume needs to pack much more of a punch than little edges on a corset, for example.  Here are a few embroidered pieces I really love, to give you an idea of what I mean:


I really need to work on my undergarments before I start any more dresses, because fitting without all the proper layers just leads to more problems later.  Not to mention the fact that I'm swamped with homework and really can't afford the time to start anything big right now (even though I want to).  So I think I shall continue practicing my 19th c. stitches on my corsets and petticoats for now.

Also, just because it's fun and I like to follow runway fashion, I've been noticing lately that embroidery has been making an appearance...yay historical influences!


So my love of embroidery is well-timed for inspiration, both old and new.  The vine piece I did from Marsh's book included two vines of chain stitch, one sunflower with a french knot center and padded satin stitch petals, buds with 'brush' stitch (which is my favorite, I think), a lily mixing brush stitch and satin stitch, leaves out of a french twist I forget the name of, and stem stitch.
It improved as it went along, and while there are a lot of mistakes by the end I had the hang of everything, including working with different thicknesses of floss and how to tell when to use what.  Since it was just a scrap I hadn't really planned to do anything with it, but one of my friends really liked it and as she's currently knitting me a hat, I thought it would be nice to give it to her.  So please excuse the very modern text--it's her catch-phrase of sorts, and I thought it was quite funny juxtaposed with the soft ladylike flowers. 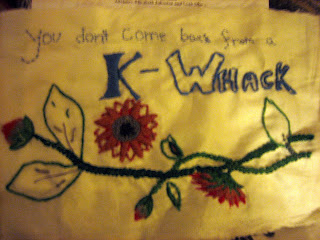 Overall, I thought this was a pretty valiant first effort, and I'm excited to keep practicing as I expand my foundation wardrobe. Now I just need to get myself organized enough to start cutting...


A Side Note:
You may have noticed the blog underwent a makeover this week...I've been thinking quite a bit about aesthetics recently while working on my embroidery technique and thinking about ways to work it into my clothes.  I was especially pleased that I had enough images to pull together an entirely plaid header (even if the sheer plaid on the white skirt isn't totally visible).  Hopefully this will also be easier to read.

As promised, I really did go to a lovely ball last weekend and wore my new tartan ballgown for the first time.  It still needs a lot of work (the skirt will get finished and the bodice will get a bertha and velvet ribbon) but it was serviceable for a first evening out and I had a lot of fun dancing in a whirl of red and white!
Returning Heroes is an extra-special ball, because it is the only ball of the year at which period attire is required.  It creates a really fantastic aesthetic for the evening, in addition to the friends old and new that were present.  Enough rambling, to the pictures!  I can't claim credit for any of these-they were taken by Antonia, and you can see more on her blog if you so desire. 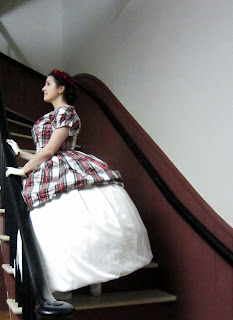 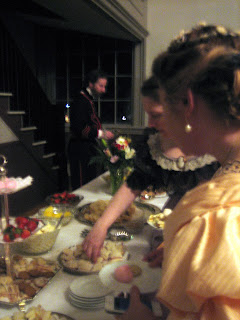 The ball was quite lovely and I look forward to finishing my dress before I wear it again!  In the meantime, I'm home to get some petticoats and corsets done over spring break, in preparation for picnics when the weather warms up.
Posted by L. R. Stern at 2:22 PM 2 comments:

I know I owe you a ball post, and I promise to do it today! I turned in my thesis draft and that means I havea day off to do something fun.

In the meantime, though, I wanted to share this FANTASTIC parody of Lady Gaga's "Bad Romance" video, dedicated to Alice Paul and the other women who fought for our right to vote.


The company behind this gem, Soomo Publishing, is an educational group working to make technology a relevant part of classroom learning and get kids motivated about subjects like American government, literature, and writing.  In addition to just being awesome, they have another super cool video about the Declaration of Independence you can watch here.

I went to a ball! It was lovely!  Then I spent all day travelling and am totally exhausted, so my plans to come home and tell you all about it immediately aren't going to happen.  In the meantime, though, here is a brief update: I finished my tartan ballgown and wore it to Returning Heroes, along with my SCARLET TARTAN DRAWERS!

You can read more about this here, but the important thing is that one of Queen Victoria's lady's maids wrote in a letter about a picnic in 1859 at which the Duchess of Manchester "caught a hoop of her cage in [a turnstile] and went regularly head over heels lighting on her feet with her cage and whole petticoats remaining above, above her head.  They say there was never such a thing seen--and the other ladies hardly knew whether to be thankful or not that a part of her underclothing consisted of in a pair of scarlet tartan knickerbockers...which were revealed to the view of all the world in general and the Duc de Malakoff in particular" (C. Cunningham, English Women's Clothing in the 19th Century p21).

Oh my goodness! Naturally, I needed a pair.

More to come tomorrow--in the meantime, I need to rest my very tired legs and brain and toes...and then practice the mazurka step I learned.
Posted by L. R. Stern at 9:54 PM No comments: