While working on my Huntress costume for the Arisia masquerade last weekend, it occurred to me how much of the process was similar to making historical garments. Obviously, there were a few major differences--mostly the outcome, which was a spandex bodysuit instead of a ballgown--but the fundamental process, starting with reference images, was pretty similar.

One of the "someday when I find the perfect fabric" projects on my list is an ermine-trimmed pelisse, and you can see my post about it here. When I make a historical garment, I start by finding tons of reference images (or sometimes just a few, like my butterfly dress!), and researching the proper shapes, techniques, and fabrics for the period and item.  I did the exact same thing for my Huntress costume, but with a little twist.

Huntress has had a lot of outfits over the years, but I specifically wanted Huntress from when she was a member of the totally kickass all-girl superhero team, the Birds of Prey. That brought my list down to two basic costumes with some changeable pieces.

Huntress's first costume, the one with the belly panel, is not something I have the abs to pull off--and I wasn't willing to get there the way Huntress did.

Yep, no situps for me! Well, at least not seven hundred. So I went with Huntress's black full body suit. From another panel, I know that it squeaks in the rain (and therefore is probably PVC or something similar).

To get that look without giving up the stretch, I ended up going with a matte vinyl/spandex, which looked smooth like fake leather but stretched in 4 directions. It was also very forgiving to work with, which was great, because I had no idea what I was doing! One word of warning, though: this stuff shows every last pinprick.

I also wondered what to do about the white stripes/cross. I did use a pattern, but had to alter it to get exactly the look I wanted and wasn't sure where I should insert white panels. For historical clothes, this is where reference images come in handy.

It was the same way with my Huntress costume. Does the bodysuit have a full cross, which then repeats on the cape? It turns out no: the cape has the horizontal stripe, while the body suit only has the vertical one.

I cheated a bit, and made my whole collar white, so that the cape could be collarless.

I'm still not totally happy with the cape (I'll shorten the front before comic-con), but just as historical garments need all the pieces (chemise and corset to shoes and hat), superheros need all the accessories. Julia and Antonia did an amazing job on the mask, and I was actually quite pleased with the yellow crescent/boomerang cape pins we threw together at the last minute, along with my purple pleather utility belt from upholstery fabric. I have more, so I'm planning to make the thigh holster before comic-con...and I also have a crossbow.

While to process was a huge learning curve and the final product not at all historical, I have to say that the attention to detail and research standards I've learned for historical sewing made this outfit a success!

(and one more panel, because "costume regret" is absolutely something I've felt while out in historical clothes...)

I want to do more things with pictures and I need to use photoshop for work, so I decided to practice some of the more creative parts of the program with a couple of pictures from Arisia.

Totally silly, but there is so much potential for a future serious costumed photoshoot...

Email ThisBlogThis!Share to TwitterShare to FacebookShare to Pinterest
Labels: geekery, just for fun

Well, looks like I lost a month there.  I am going to make an effort to be better, but in my defense I shall show you what has been keeping me so busy! (aside from being a grown-up, which is hard...)

Since October I have been a full member of the comic readers' bandwagon, and my gateway drug/first favorite series was/is the Birds of Prey.  It turns out the group made a cameo appearance on the children's cartoon "Batman: The Brave and the Bold" in which they sing...so naturally, Antonia, Julia and I decided to get our superhero sewing on and enter the masquerade (a costume contest) at Arisia, our local Sci-fi/Fantasy convention that we attend every January. It was so much fun, but also a lot of hard work! In addition to weekly rehearsal for the past few weeks, it was also my first time working with spandex and my first time sewing pants. Woo!

All of our hard work paid off, though. The con was a blast, and the audience seemed to really love our performance. Plus, I really love Huntress--I will definitely need to wear this again!

As it was a convention we spent the whole time dressed up, so without further ado I will move on to pictures and fill in my commentary as captions. Like Gotham City, Arisia has an interesting and crazily-dressed population. 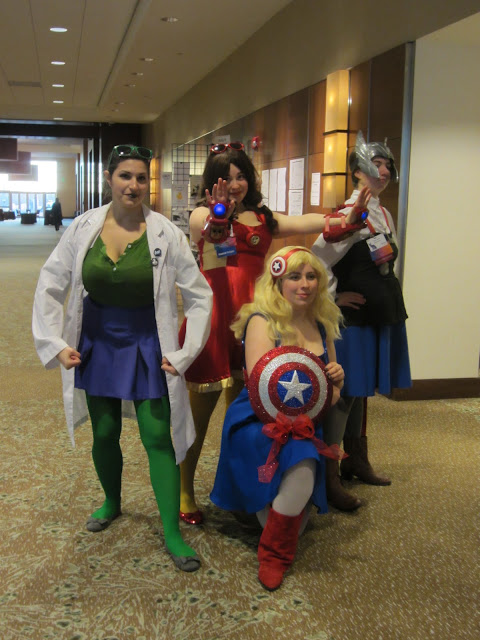 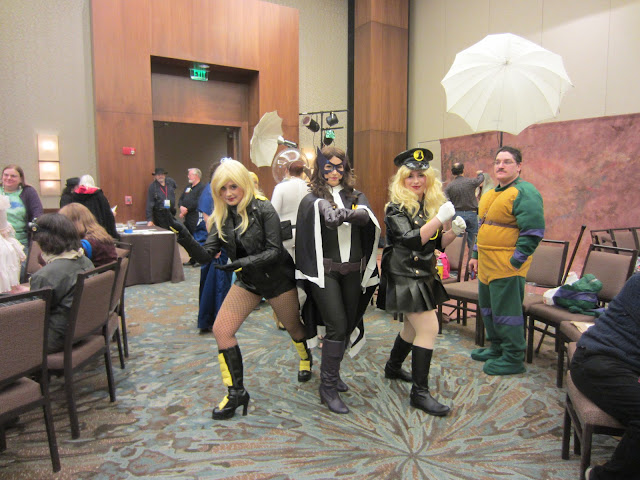 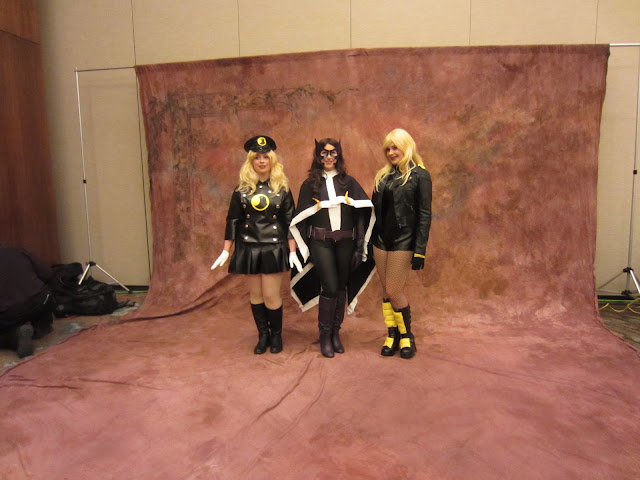 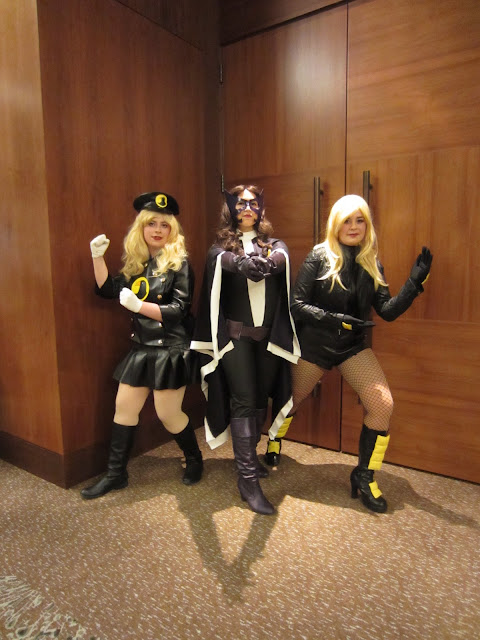 What a weekend! I am still not fully recovered, but I'm getting there. It was a TON of fun, and I am already looking to more superhero dress-up for Boston Comic Con in April! Hooray!

Or as Lady Blackhawk would say: Hawkaa!!

EDT: for more pictures, you can see the Boston Globe's coverage of the Arisia masquerade here!
Posted by L. R. Stern at 12:26 PM No comments: