I have decided recently that clearly I do not have enough hobbies, and should find something to do with myself.  Just kidding--the truth is that I am a crazy person and apparently hate sleep. But either way, I am investigating taking up archery.  My family used to shoot together sometimes when I was younger, and I remember really liking it.  So with that in mind, I thought it might be a good idea to make a dress I could wear for archery.  I am also planning to go to New York Comic-Con in October, and will need something to wear on the main day of the convention.

Clearly, all of this is a long explanation of why I need to be Princess Merida from Disney'Pixar's Brave.

Part of the reason this project has suddenly occurred to me is this fascinating article over at Clothes on Film. So much went into the animation of these costumes, down to learning how to accurately construct a kilt, and virtually woven fabric for Merida's dress.  It made me start thinking about the historical accuracy of the clothes.

So what about a historically accurate Princess Merida outfit?

Some things will be easy to adapt: Merida's dress is supposed to be dark blue linen, with a wool cape.  Both natural fabrics, they make a lot more sense than the shiny stuff the Disney World Merida wears--although she is super cute.

I tried dating the film beyond "Ye Olde Highland Stereotypes," but it was pretty difficult.  Merida's dress appears to be heavily inspired by a basic kirtle shape, which was worn in various parts of the western world for a very long time; the specific style Merida's resembles (with no waist seam) is accurate for at least the 12th-15th centuries, but also looks a bit like the 17th century portrait above.

It was however a bit easier to narrow down the time period based on the men's clothing in the movie.  The men all wear kilts with a piece fastened across the chest over the shoulder, which makes it appear to be actually a "belted plaid," or feileadh mor in Gaelic.  This was formed from a single cloth which created the pleated bottom and shoulder piece.  This existed at least as early as the 16th century, which would place Brave in the 16th or early 17th century.

While peasants (and the Highlands were a mostly agrarian society) were often behind high high fashions of any given period, there is more debate in the literature about what Scottish royalty wore.  Given that the movie is certainly set before the Union of 1707, I think it is fair to assume that while at home Merida is not dressed in highest court fashions.  With all of this in mind, and the fact that I have at least one portrait of a princess in a dress similar to both Merida's dress and a kirtle from the 17th century, I'm going for that as my basic style.  I also quite like this portrait, which is from the 15th century.

Here Joan is wearing what appears to be a front-lacing kirtle and quarter or half sleeves.  With this in mind, to get the look of Merida's gown I will follow the character's laced from and cheat a bit on the sleeves.  If I make a dress with sleeves like Joan's, but add ties for more sleeve pieces, I can get the jointed-sleeve Merida look, but take them off and hide the ties if I ever want to look more accurate.

The only other thing Merida's costume lacks is an essential part of the 15th-century Gaelic woman's wardrobe: a plaid or arisaid  worn over the top of the outfit.  These were either attached at the belt or fastened similar to a man's plaid with a brooch on the chest.  This could be pulled over the hair, which was probably a great idea given how cold it gets in Scotland.

I would describe what Merida wears as a hooded cloak, but the idea is similar.  Several sources I read also proposed that the woman's arisaid was not always plaid, but often solid with a colored border or striped.  That would mean adding a colored border to Merida's cloak and fastening it with a brooch (which it appears to do already) makes it a passable alternative to a real arisaid--especially if the hood isn't a separate sewn and attached piece.

I suppose this means I need to start looking for dark blue linen...and also that I am a crazy person.  Onward to NY Comic-Con!

Apparently I lied about finishing the Newport posts, but I am always interested in the "behind-the-scenes" aspects of life, and I thought this was an opportunity to share one.  Bill Cunningham is a fashion photographer for the New York Times, who writes/photographs the "on the street" section and the "evening hours" spread. (and actually quite a fascinating person.  I recommend the documentary about him, Bill Cunningham New York.)
Bill has been photographing at Newport for the past few years, and is truly darling.  He seemed to quite enjoy our young set this year, and we were all completely entertained by his mimed instructions for how we should move to make our various shenanigans more photogenic, and also by the fact that he referred to us as "children."  Anyway, we were in the Times the Sunday after Newport, in two spreads.  Can you find me?


My favorite is the one where I am dancing with Officer Scott, because it was a night I was wearing a tiara.  Yay, tiaras!

Bill is 83 years old (he was born in 1929), and we were all a little concerned at his mad dashes through the ballroom for the best possible photograph.  However, he survived, and we were even able to capture him in action!  Here are some (rather silly) pictures of us being photographed by Bill--there, that's actually everything from Newport! 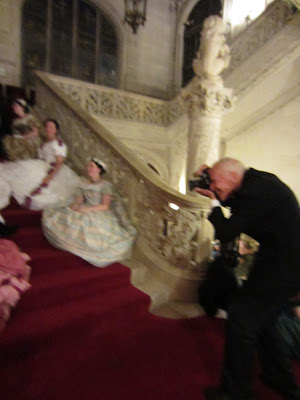 Seriously, thank you Bill Cunningham.  You were so much fun.

Also, BONUS: there is a video over at the NYT website here.

And one last behind-the-scenes shot: sometimes even vintage dancers get dehydrated.  Slurpees!


Hooray for TNG adventures! and I do love my scarlet tartan drawers...although I'm glad those didn't end up in the paper.
Posted by L. R. Stern at 11:57 PM No comments:

Did you know that in the 1890s a casino was a public building, not a gambling hall?  I learned that at Newport, when we danced at the Roger Williams Casino, which was certainly not a place for poker.  Like a modern casino, however, it was certainly a place for bling.
We don't do 1890s very often (something I am hoping, however, will change now), so this dress was an exciting chance to be sparkly.  So naturally, we were.  My dress is not done, but considering it wasn't finished when I arrived at Newport, the fact that it was wearable by Friday was a great success.  The skirt and bodice are decorated with butterflies made of lace and rhinestones.  Someday they will also be outlined in sequins so that they pop a bit more.  While this dress still needs a lot of work, I was happy with it for the ball (and how swooshy the skirt was!), and the ball was a lot of fun.  Any ball where we are all wearing tiaras promises to be a good night.

Enough from me--I'll let the pictures say the rest.  Shiny!


Whew! We made it!  That was the last Newport event.  It was an amazing week, full of gorgeous ballrooms, fabulous dresses, and a lot of dancing.  It would not have been the same without new friends, though! They were the best part.  I look forward to sewing and adventuring with them this year--and I'm actually off to do it today.
Posted by L. R. Stern at 9:39 AM No comments:

Glen Manor is a special event, because we have a formal dinner and reception in the house before the dancing begins.  The food was yummy and the gardens were lovely, and while usually I don't like this event much it turned out to be pretty lovely.  We didn't do a lot of dancing though (too full!), so I'll let the pictures say the rest.

We took a whole series with flowers that matched our dresses...we are a set!


then we went on an adventure to the water! 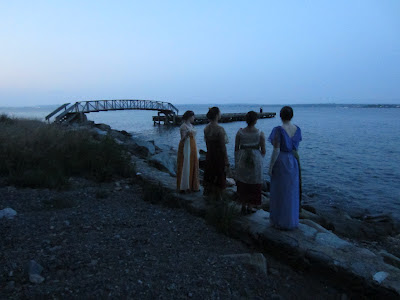 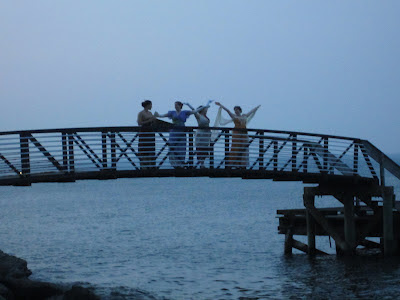 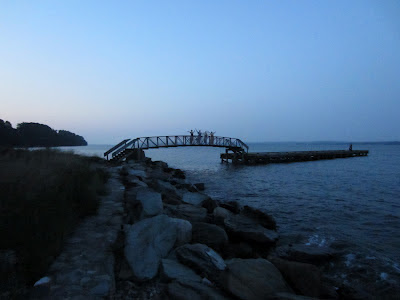 Later we read stories, and did some more stair posing... 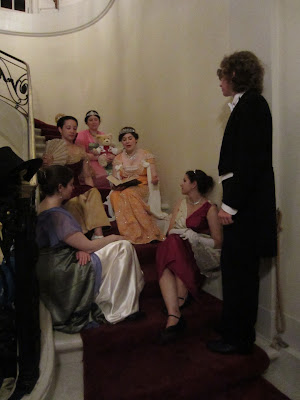 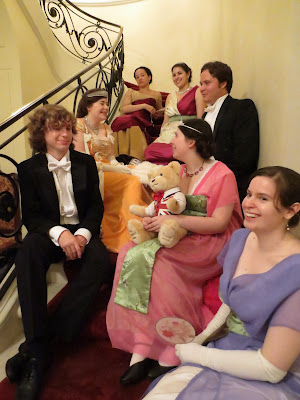 We even did a little dancing...in fact, I had one really fabulous tango with our resident police officer!  For Glen Manor we are required to hire a police detail, and several years ago this particular officer got the gig, and liked us so much he got a period uniform, and he wears it when he works our Glen Manor event.  Isn't that fabulous?  He also has great potential as a dancer, and suffered gracefully through my poor back-leading. 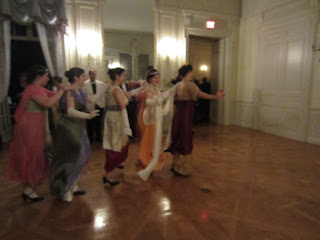 All in all, it was a delightful evening.  TNG for the win!

I am woefully behind on my posts, and I apologize! In my defense, I had a fabulously exhausting weekend dancing in honor of the bicentennial of the surrender of the HMS Guerriere during the War of 1812.  There will be posts and pictures, but first I owe you the rest of Newport!

Wednesday night after the formal tea was the 1860s ball at Ochre Court, a truly beautiful mansion which now belongs to Salve Regina University.  This was my favorite ball of the week, and also the only ball at which I desperately wanted a bodice cam, because dancing through multiple rooms during a single dance is truly magical and movie-like.

We had access to the whole downstairs as well as the second-floor balcony, so there were many beautiful places to explore.  I also wore my tartan ballgown, which is a favorite, that was newly adjusted so it looked better than ever (thanks, Quinn and Antonia!).  It was perfect for swooshing through dances in every room.
This was also the night in which we all tumbled down...or at least Quinn and I did.  I fell (twice!) during the Gothic Dance, and Quinn toppled during Speed Virginia Reel.  Speed Virginia Reel is not an actual dance; it is the Virginia Reel done in double-time, in which the dancers flat out run through most of it.  There was some impressive skirt momentum, and it was so much fun I thought I would pass out from laughing!  Hooray for the young set. 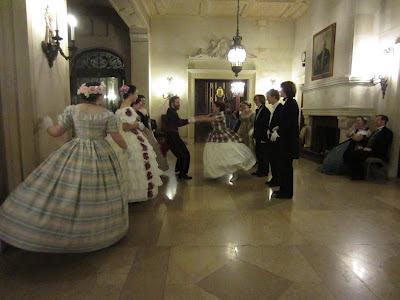 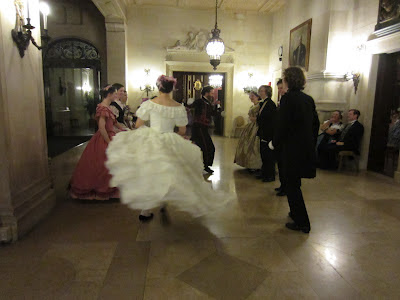 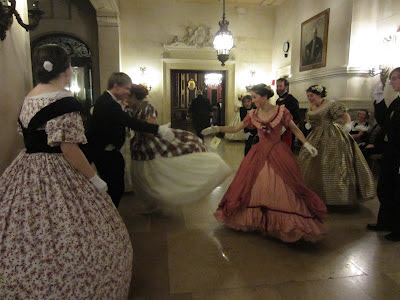 However, it was not all chaos and hilarity.  We did spend a lot of time taking lovely, calm pictures in our fabulous dresses.  If we look a little winded, though, now you know why!

Ochre Court also has a beautiful staircase with a sweeping red carpet against white marble.  Naturally, the evening wouldn't have been complete without stair pictures...