We went on a castle adventure, so there had to be magic. 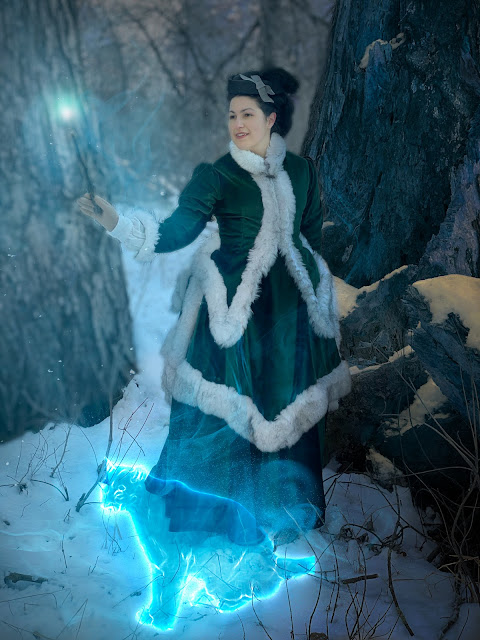 In high school I took photoshop (I'm not sure if this counted as an art class, or a technology class?), and loved learning effects that let me zhoosh photos into something a little more otherworldly. I don't play with it often, but I still really enjoy photography and the editing process.
Do I really need to hone my patronus-conjuring skills? No. But adding to or drastically altering photographs pushes me to consider the composition, light, and color balance because all of those come into play. So I think it helps keep my eye sharp for future photoshoots even if they don't require magic!
Since I'm still in a non-sewing, too-drained-to-finish-that-dance-research-post transition, I thought I would share a few of my attempts.
In addition to the patronus above, I gave myself a wand... 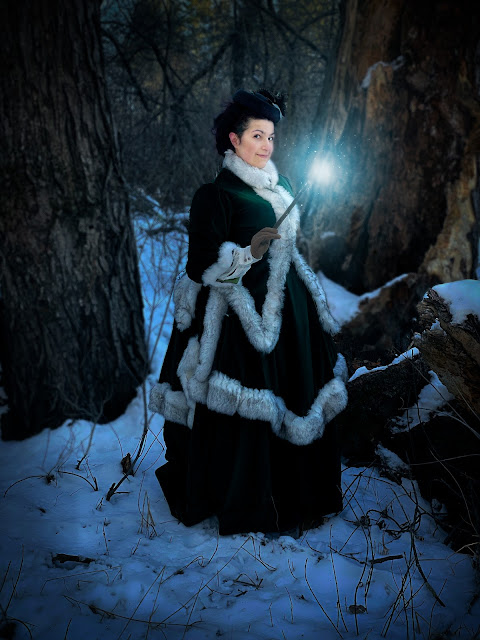 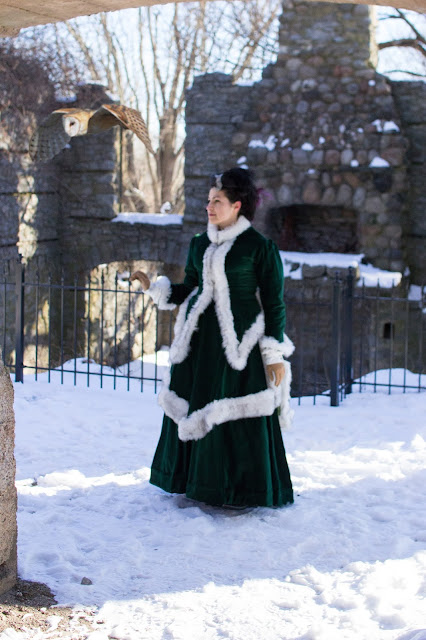 It's a different kind of creativity, but it's nice to mix it up every once in a while!

The Return of Witch Winter: A Journey to Bancroft's Castle

At the moment I'm sitting on the floor of a hotel room trying to coax my cat to come out from under the radiator...so I figured I would entertain myself (and hopefully all of you) with a sequel to a 2019 undertaking. (Thus the very extra title. I am amused at least!)

A pact, some magically perfect weather, and the ruins of a stone castle hunting lodge - definitely the tagline to a movie right? 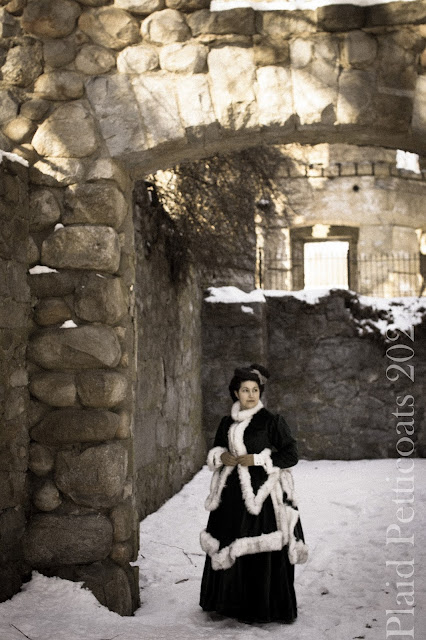 Not a movie, but a very good adventure, which is better I think. 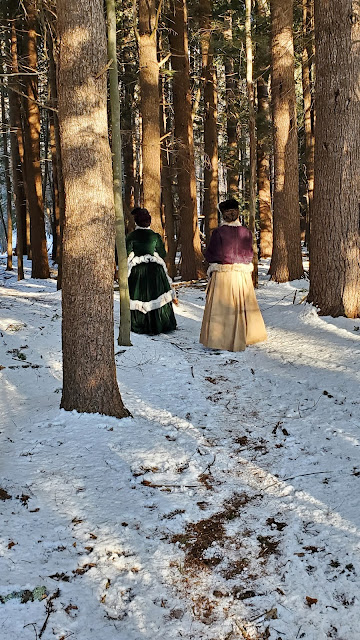 Several years ago, a friend made a Hufflepuff bustle ballgown, and as I was doing research to make my own 1870s ballgown I started noticing green dresses with gray trim popping up quite frequently in fashion plates. As a Slytherin I'm partial to this combo anyways, and with Emma's dress on the brain I decided I wanted my own house bustle dress. But I also got my heart stuck on doing a velvet and fur ensemble, which....doesn't really lend itself to a ballgown. So instead I abandoned the ballgown idea, and decided that I would make a winter dress at a later time.

That time became winter 2019, (aka "witch winter" because I was also on a bit of a witch-based novel kick at the time). I finished the project in March, which was too late to go skating or have enough snow for good photos. Then late 2019 into early 2020 was insanely busy and I was travelling, and I didn't have time to do a photoshoot. And by the time I was grounded, the snow was gone again.

Cue the pact. Quinn at The Quintessential Clothes Pen had also recently completed a wintery bustle ensemble, and needed photos as well. So with lockdown keeping our weekends very free, we vowed that the next weekend when there was good snow for photos, we would do a photoshoot. We actually scouted locations in advance (it was nice to get out and do some hiking), so we knew exactly where we wanted to go: Bancroft's Castle, a 20th century estate-turned sanitarium-turned hunting lodge that burned down in 1932 and is now public land. (And an off-topic fun fact: if you hike up to the castle and look out over Gibbet Hill, it may look familiar...because it was one of the filming locations in the 2019 Little Women movie.) 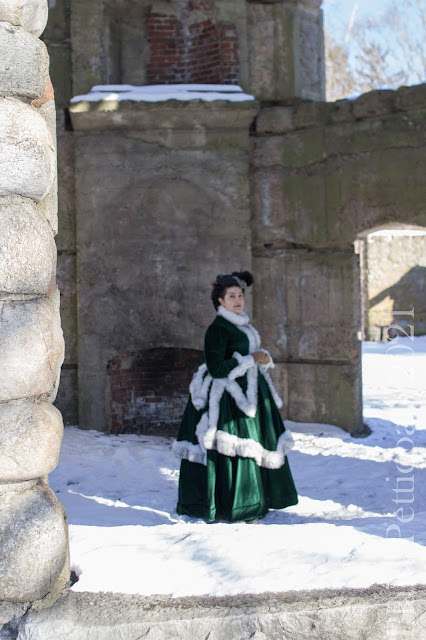 During the week it snowed, and Saturday dawned crisp and clear. It was a perfect New England winter day, with bright sun and low temperatures, and I was totally warm! Between the cotton velvet, flannel interlining, and silk lining, I was plenty toasty. The only cold part of me was my hands, but I have notoriously bad circulation and that happens in modern clothing too.

(I did cheat and wear modern snow boots, because we were hiking up a hill and I honestly didn't want to get my historical shoes dirty.)

This was essentially the first outing for this outfit, and it was so fun to get to finally wear it! 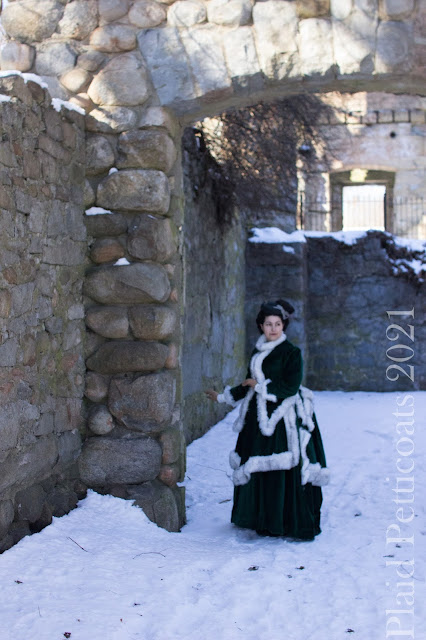 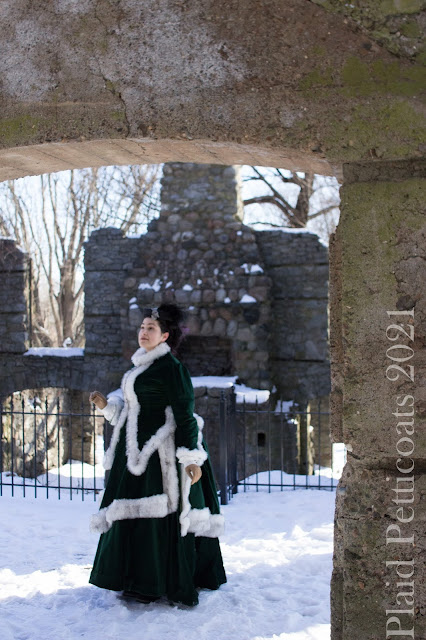 We had a lot of fun playing with the angles of the archways and the modern wrought iron railings. With the weather so cold, we had the place to ourselves which was lucky but perhaps not surprising.
I also got to put the pockets in the underskirt to good use - they were great places to stash a cell phone, lens cap, and mask. 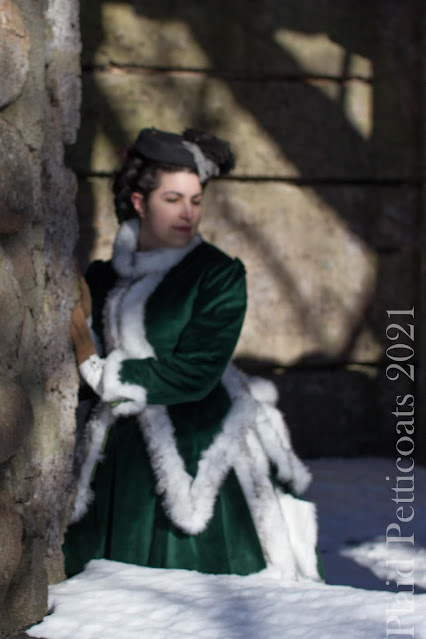 My hair was a bit of an undertaking, but I'm happy with the way it came out! Since my hair is naturally very curly, I can usually tuck the ends around false braids to make them blend in. But I dyed my hair purple this year! From the front, you can't tell and everything blends - from the back it's a little more obvious what's actually my hair and what's not. Oops. 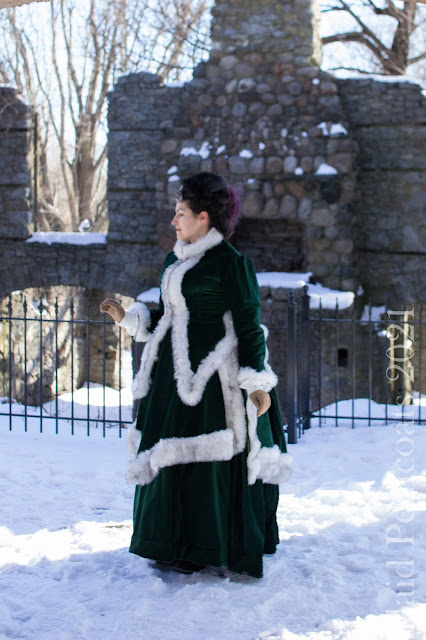 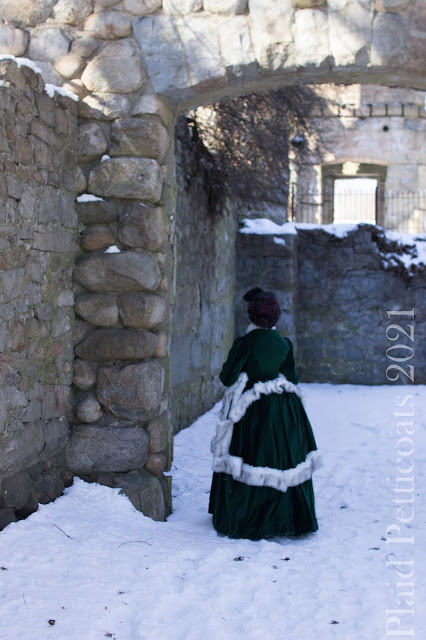 The hat is a very old purchase from a sutler at a reenactment when I was in high school or just after. Since it doesn't work for most of the periods I do, it's been languishing in my closet and I was pleased it fit so well with this project! 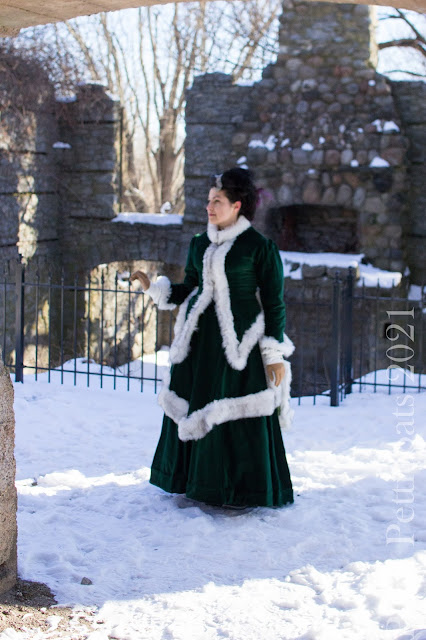 Now I just need to finish the cape I was making to go with this...I suppose that's an excuse for a trilogy. Maybe by next winter!