I have an ongoing fascination with caps. I think they're absurd. Also, I kind of love them?

Usually my focus is on Regency caps, because the only reliable daytime event I go to these days is the tea at our annual Regency dance weekend. But every now and then I come across a later period cap, and I tuck it away. While I was working on my 1860s morning dress, I came across a particular description for a breakfast cap that seemed serendipitous:
"NOVELTIES FOR DECEMBER...Breakfast-cap for a bride (a fashion becoming more and more universal since breakfast caps are now made extremely piquant and becoming). Material spotted thulle [sic], trimmed with roses and rose de chine ribbon."

I think a combination of being newly married myself and finding spotted tulle while at the craft store for something wholly unrelated lead me to decide that I needed a breakfast cap to go with my morning dress. I ended up taking inspiration from the description above and the general shape of these two extant caps from the period.

And then I made it up. I knew I needed a structure of some kind, so I ended up using black velvet ribbon to make a base shape. Then a gathered a circle of spotted tulle to the ribbon, and trimmed the hell out of it.

I did depart from the description on the colors: mine is trimmed in blue silk ribbon and purple flowers rather than roses and pink ribbon, but both the ribbons and flowers came to my stash from wedding gifts. So I feel like that doubles down a bit on the "bride"-iness of the cap and it makes me happy!

In the end, I should have pinned this in a bit better. It slid back from the center of my scalp where I had intended it to sit. Also, by the time this picture was taken my loosely styled hair was falling pretty considerably. But even so, I'm really pleased with this first foray into caps! It's absurd, which is just the way I like it.

Back in December, I bought two lovely reproduction print cottons on a Little Women movie high. Printed cotton always feels very appropriate to me for New England, as between 1810 and about 1840 the Massachusetts textile industry was one of the largest in the country (and is where the power loom was invented). The Waltham-Lowell system of fabric production introduced two major ideas to fabric production: 1) going from raw material to a finished product (fabric) with all processes happening within the same factory building, cutting down on transportation and logistics; and 2) primarily employing single young women. These factors helped to shape the production of cloth in America for much of the early 19th century, and helped give the group of mill owning families known as "the Boston Associates" significant financial clout. The textile industry shaped the state as I know it today: 45 mill towns were established in MA in the first half of the century, and the mill owners also invested in the establishment of railroads and water power sites.


Of course, during the 1860s new cotton fabric would be difficult to come by--the economies of the North and South were closely linked through cotton textile production, and so the Confederacy placed an embargo on raw cotton. With a lack of raw materials or employees (as many mill workers, known as "mill girls," volunteered as nurses or went home to fill in for men who had joined the army), many mills shut down until after the war. But there are so many mid-century cotton dresses, I think the association has stuck for me.

But you came here for the clothes! So back to that fabric order...I ordered 2 prints, one dated c. 1860 and the other dated 1830-1845. The 1860 print seemed perfect of a very particular impression-inspired dress, but I had didn't really have a vision for the earlier print. I just really liked it when I saw it on the store website. Xena approved as well. 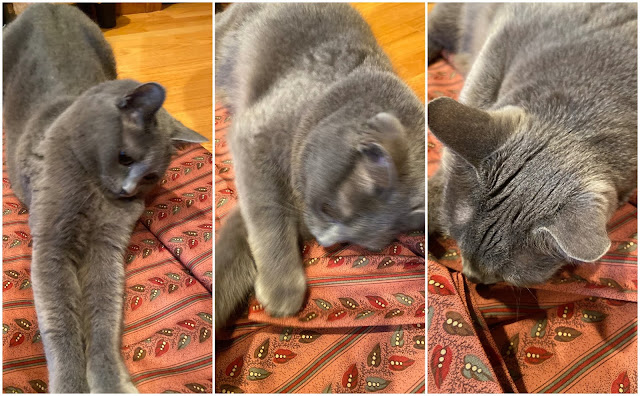 At some point over the next few months while I was busy with other projects, this fabric started to tell me that it wanted to be a morning dress. I spent some time looking at extant morning dresses and fashion plates, and started to get some ideas--specifically, many of the originals I liked were trimmed with quilted silk, and I happened to have some in the stash!

The term "morning dress" referred to relatively simple dresses that closed in front, and were intended for wear around the house. Several styles appear in magazines, including a sack coat and matching skirt, a fitted dress with no waist seam, and a dress belted to define the waist (with or without an actual waist seam separating the bodice and skirt). Two notes I found interesting while looking at issues of Peterson's and Godey's Lady's Book for this project were that morning dresses intended for interior wear (as opposed to walking dresses or morning walking dresses) were noted as often trimmed with velvet, embroidery, or quilted silk; and that apparently in France morning petticoats were more expensive than morning dresses, because they were so finely trimmed or embroidered. This actually makes sense, as many morning dresses are open in front, revealing the petticoat.


You can see my Pinterest board for this project here, but in general here were the elements I decided I wanted to incorporate:
-button up bodice
-full sleeves with cuffs that open to undersleeves
-quilted silk trim
-a patch pocket
-a belt with a bow

I also decided that since this project was not for an event (shocking, I know!), I was going to use it as an opportunity to focus on small details. So I made a particular effort to pattern match at the center front overlap, do something fun with the pocket (cut from scraps, so still an efficient and period use of fabric), and carry the decorative piping to the belt. Overall, I'm incredibly pleased with how it turned out! 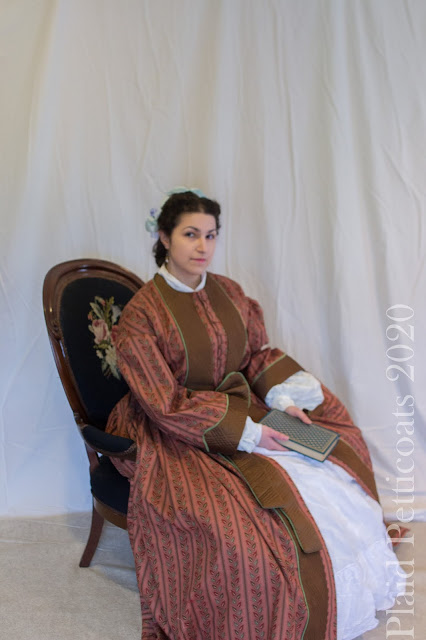 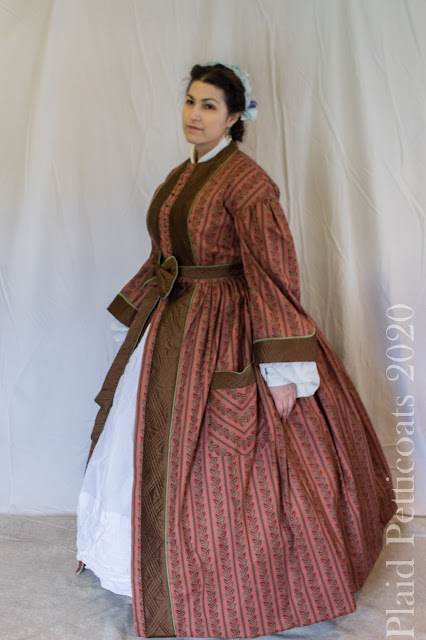 (Please excuse the sad photos, obviously locations and materials were limited! Plus after I ironed the sheet it feel down and got wrinkled.)

The dress uses the Past Patterns 701 bodice, which has a nice full look from the gathers at the front and back. Then I altered the sleeves to be open at the bottom and stop just above my wrist, allowing my undersleeves to fill in the space below. The skirt is just rectangles finished at the front edge without closures and gathered to the waistband. The quilted silk trim is sewn on top of the bodice and skirt fronts, and finishes the neck and sleeve edges. All of the quilted strips are edged on one side with bright green silk piping.


Aside from the cotton (which admittedly was the bulk of this project), everything else came from the stash: acid green silk for the piping, quilted silk for the trim, lining, and an old "create your own buttons" kit I found in a large collection of miscellaneous buttons I was given several years ago. It was nice to use so many things that have been around for a long time!

This dress also gave me a chance to try out several new techniques, including patch pockets and hand-worked button holes. I actually really enjoyed doing the button holes, and will no longer avoid buttons on projects! The patch pocket was less intimidating but equally fun to do. It's stupidly large because I wanted to be able to carry my cell phone in it if I'm wearing this for living history programs in the future. To ensure my phone would fit I traced my phone onto a piece of pattern fabric and then measured a pocket around it that seemed reasonably sized. 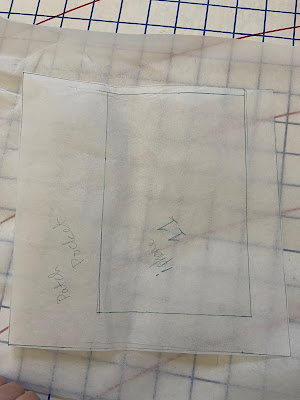 Then I folded the pattern in half and added a seam allowance, so that I could cut 2 pieces to create a chevron on the pocket. Because why not? 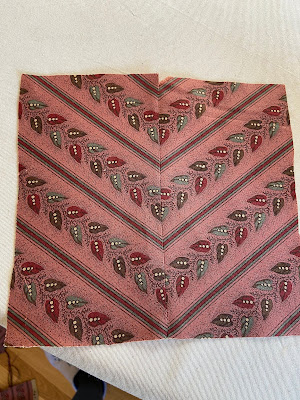 Since I've only worn this for photos to date, I haven't needed to carry my phone around. But I know I can, and that's what matters! 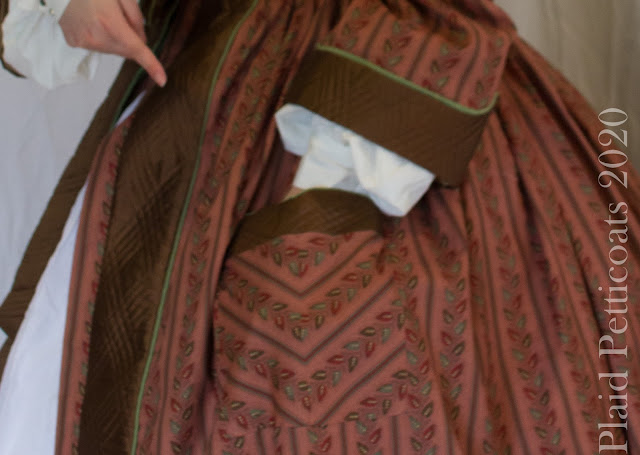 The final element of this ensemble is the belt. Many of the morning dresses I looked at for inspiration had tie belts with tassels, which are very cute. I liked the idea of a belt but worried a tasseled belt would push this more into wrapper/negligee territory than I wanted. But then I found this illustration with a fun bow belt:

I decided to go in that direction and make a belt with a bow. I also piped it with the same acid green silk as the quilted trim on the dress, similar to the way the scalloped edge and lace are carried from the dress to the belt in the illustration.

I forgot to take pictures of the belt construction process, but it consists of a long belt piece, a square that becomes the bow, a small loop for the bow center, and 2 tails. The tails are sewn to the back of the loop, and then the large square and the belt are threaded into it. It makes the whole thing rather compact and gave me control over each element individually, which I think worked out well.

Since it will be a while before I can wear this out and get help with photos, I decided to entertain myself this weekend by setting up a photography studio in our bedroom. I had planned to be totally self sufficient, but after a small disaster falling off a chair, losing my carefully hung bedsheet-as-backdrop, and having the cat escape (I was trying to get her to be in photos like period cats!), Mr. Plaid stepped in and decided it would be better for everyone if I had a photographer. 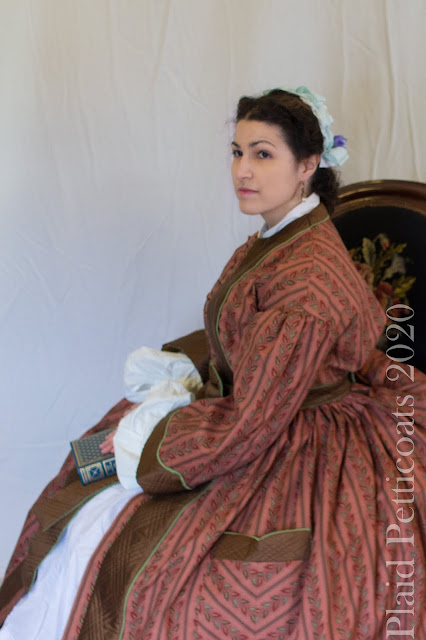 Considering he has never used my camera before, and I was posing in front of a bedsheet taped to the wall, I think he did ok! 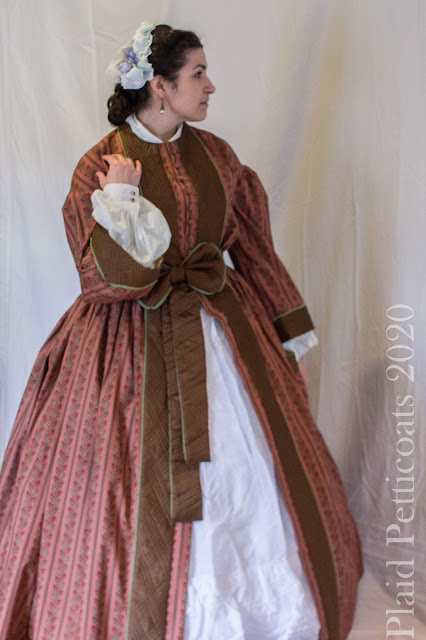 I look forward to making a fancy petticoat to wear under this in the future, but for now the simple look matched my mood. This was definitely a "make do" sort of photo shoot. But I appreciated the comfy-ness of this ensemble and the opportunity to experiment a bit with period hair without the looming deadline of a ball. 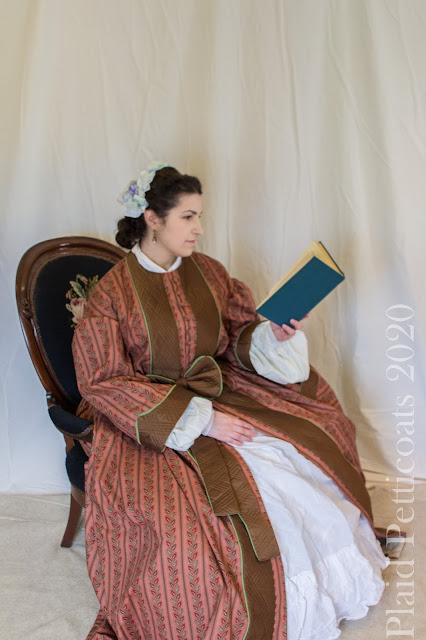 In the end, this project had somewhat ironic timing: as we're all staying home these days, it's rather appropriate to have a dress for wearing around the house. But I look forward to wearing this out in the future, for living history programs or just having friends over for brunch! In the meantime, I'll crack open a good book and continue to try to rope the cat into photos.