An Introduction to 19th Century Photography

Browsing posts, Pinterest boards, books, and articles about historical costuming reveals a wide variety of sources we use as inspiration; extant garments, paintings, fashion plates, and portraits are some of the most common. This is true for a lot of periods (although the farther back you go the more scarce extant garments become), because artists have been capturing the human image for centuries and in general we like to be memorably captured in our best clothes.

But something revolutionary happened in the nineteenth century: the process of using a mechanical device to capture an image and, using chemicals and light, create a semi-permanent likeness was developed. In other words, photography was invented. Depending on what you read, there are a lot of dates and inventors associated with the photographic process, and to this day both technology and artistic practices are constantly evolving and experimenting and changing what photography means. This post is just a brief overview, focusing on some highlights that interest me.

There are two ways of looking at photography as a monumental contribution to our understanding of history (and our ability to re-create it): the subject and the photographer. Most obviously, photographs (or heliographs or daguerreotypes or ambrotypes or tintypes depending on the process used) are taken of something. This allows us, the modern viewer, to see whatever it was that the photographer saw when the image was taken. It might be what our street looked like in the 1860s, what a store might look like, or (of course) what people looked like/wore. Looking at photographic likenesses (rather than paintings or mass-produced illustrations like fashion plates) gives us a chance to inspect details, step into the every day, and witness historic moments.

The second way that I find photographs so important for history is what they tell us about the person who took them. In many cases (e.g., studio portraits, journalistic photos), producing images was a trade much the way it is today. But (also like today) photography was also a form of artistic expression, world exploration, and documentation. While certainly there are career photographer’s whose work is important for our understanding of history, I am most fascinated by the world as it was captured by amateurs.

While the roots of modern photography go back as far as the 1810s, it wasn’t until the development of the daguerreotype—the first popular photographic process, named for its inventor Louis Daguerre—and its refinements in the 1840s that portraits could be done relatively easily and cheaply. For the first time, taking a picture of someone or something had a relatively short exposure time and produced a detailed, permanent image. Thanks to the French government’s decision to put the Daguerre process in the public domain, the system took off to capture portraits, scientific findings, astronomical views, urbanization and modern architecture, archeological expeditions, anthropological studies, and an array of artistic experiments over the course of the next two decades.
The Daguerre process used copper plates coated with silver nitrate that were then treated with iodine fumes, exposed to light in the camera, and developed with mercury fumes before being “fixed” with hyposulphite of soda. In the 1850s, the invention of Albumen paper by Louis Blanquart-Evrard introduced the first paper photographic prints. Albumen was cheap, portable, and could be purchased in lard quantities. This further aided the popularity of both professional and amateur photography because while immediate development of the image (and therefore an on-site darkroom) was still required, it made the process cheaper for patrons, more approachable for photographers, and more portable. While not quite as clear daguerreotypes, albumen photographs could have multiple prints of a single image, and they were also much better for pasting into photo albums. While the daguerreotype stayed popular in the US into the early 1860s, albumen paper-printed photographs eventually overtook them it.

As the photographic process became faster, cheaper, and easier over the second half of the 19th century, likenesses became a much larger part of everyday life. New technologies developed better lenses and smaller cameras, while new chemical approaches changed development. Stereoscopic images brought pictures into 3 dimensions. Births, deaths, marriages, and lazy summer afternoons were documented for posterity. Fabulous clothes were captured. We can see many of these images today in archives and online, which is a really neat way to jump into the past.

So I will leave you with a quote to think about, and some images to inspire you. What photographs have shaped your vision of the past? Do you like using them for research?

Read more about the birth of modern photography:

Articles at the Metropolitan Museum of Art on Louis Daguerre, The Daguerrian Age in France, and photography on Egyptian expeditions

As I was doing research about Mrs. Madison for the ball (and my last post), I happened upon a graphic re-telling of Dolley's most famous FLOTUS adventure for kids.

Email ThisBlogThis!Share to TwitterShare to FacebookShare to Pinterest
Labels: just for fun

Last Saturday was the Dolley Madison ball in Salem, and helping with preparations gave me a chance to learn a little bit more about the eminent first lady. I'm so glad I did!

Wife of President James Madison, Dolley's hosting skills were already well known and respected in Washington by the time she became first lady. During her husband's presidency, Dolley hosted weekly "Wednesday drawing rooms" that brought disparate political and social groups from the D.C. scene together to mingle. What I find especially remarkable is that Dolley didn't leave the networking to her husband--she presided over these evenings, as well as dinner parties and other events, alongside him. She was also the first FLOTUS to use her position for social justice work; while in the White House Dolley founded a D.C. home for orphaned girls.
In addition to her knack for making enemies talk (even Federalists, the opposing party, attended), Dolley was known for her colorful outfits (including plumed turbans) and colorful menus (including ice cream).

Dolley was also FLOTUS during the War of 1812, and was living in the White House when it was burned by British forces in 1814. It's worth noting that in addition to living in the White House, Dolley also played a huge role in it's interior completion and decoration--so she probably felt an especially strong sense of ownership for the house beyond it just being a symbol of state. Even so (and despite plans to serve dinner to 40 officers that evening), Dolley kept a clear enough head to prioritize rescuing important state papers and symbols of state (George Washington's portrait) before fleeing before soldiers from the Battle of Bladensburg arrived (they ate Dolley's dinner and looted the house before burning it).

After James Madison died in 1836, Dolley continued to be a public figure in politics. She was even given a special seat in Congress so that she could be present on the floor for debates. Dolley also continued to advise her successors to the role of FLOTUS in their duties as White House hostess.

My shot blue/gold dress is new--yep, after a week of work travel I decided to spend Friday night (and Saturday morning) making a new dress and baking cookies for the ball. Life isn't fun without sleep deprivation and a chance of not being dressed, right? I kid, but actually I really wanted something new for this ball, and this fabric had been sitting in my stash for over a year. It's such wonderful stuff! I am really looking forward to adjusting the fit (last minute sewing for the win...) and then trimming the hell out of this (bonus: trim will cover up all the fit adjustments), but the shot faux silk is so lovely it really holds its own.

To learn more about Dolley Madison, check out the sources below!

Dolley Madison Biography at the National First Ladies' Library
Saving History: Dolley Madison, the White House, and the War of 1812 at the White House Historical Association
The British Burn Washington D.C., 1814 at Eyewitness to History
Posted by L. R. Stern at 10:07 PM No comments:

It's no secret that I love shiny things (tiaras, anyone?), but sometimes the shiny comes directly from the fabric, and that is a whole different kind of special.

Shot silk, or silk woven with different colors for the warp and weft threads (i.e., the horizontal threads on the loom-warp, and the thread passed through by the bobbin-weft). This process essentially interweaves the colors, creating a shimmering, iridescent quality.

Shot silk has been popular for both men's and women's fashions at various points in history, and is especially stunning in the big skirts of the mid-19th century (they're like magical hot air balloons!). Even on a simple piece without much trim, shot silk adds a quite special quality to the outfit.
Of course, silk is still an expensive fabric choice--especially for a large garment like a ballgown. Luckily, modern technology means there are some really nice synthetic versions on the market. My new dress (stay tuned, post coming later this week!) is shot synthetic fabric, but it's rustly and shimmery and totally satisfying. I really recommend keeping an eye out for it!

Here are some lovely examples of shot silk in the 19th century. Hooray for shiny!

An Adventure at Home

This evening I made it home from a business trip just in time to change for the 1940s and head to a showing of Casablanca with a pre-show bop over to Goorin Bros. Hat Shop for their party...except that we were accidentally a week early. Oops! It turned out to be a lot of fun, though--the shopkeeper and assistant shopkeeper were lovely, we had a nice chat, and they let us take some pictures in the store.

We also received invitations to the event for real, so we're excited to go back! In the meantime, I wanted to share these images from our completely unplanned 1940s hat shop shoot. Many thanks to Goorin Bros. for your hospitality! I can't wait to wear my new Simona beret to work tomorrow.
(There aren't any of me because I'm fussy and didn't like any of them, so stay tuned and I'll have some after the real event next week. For now, check these out!) 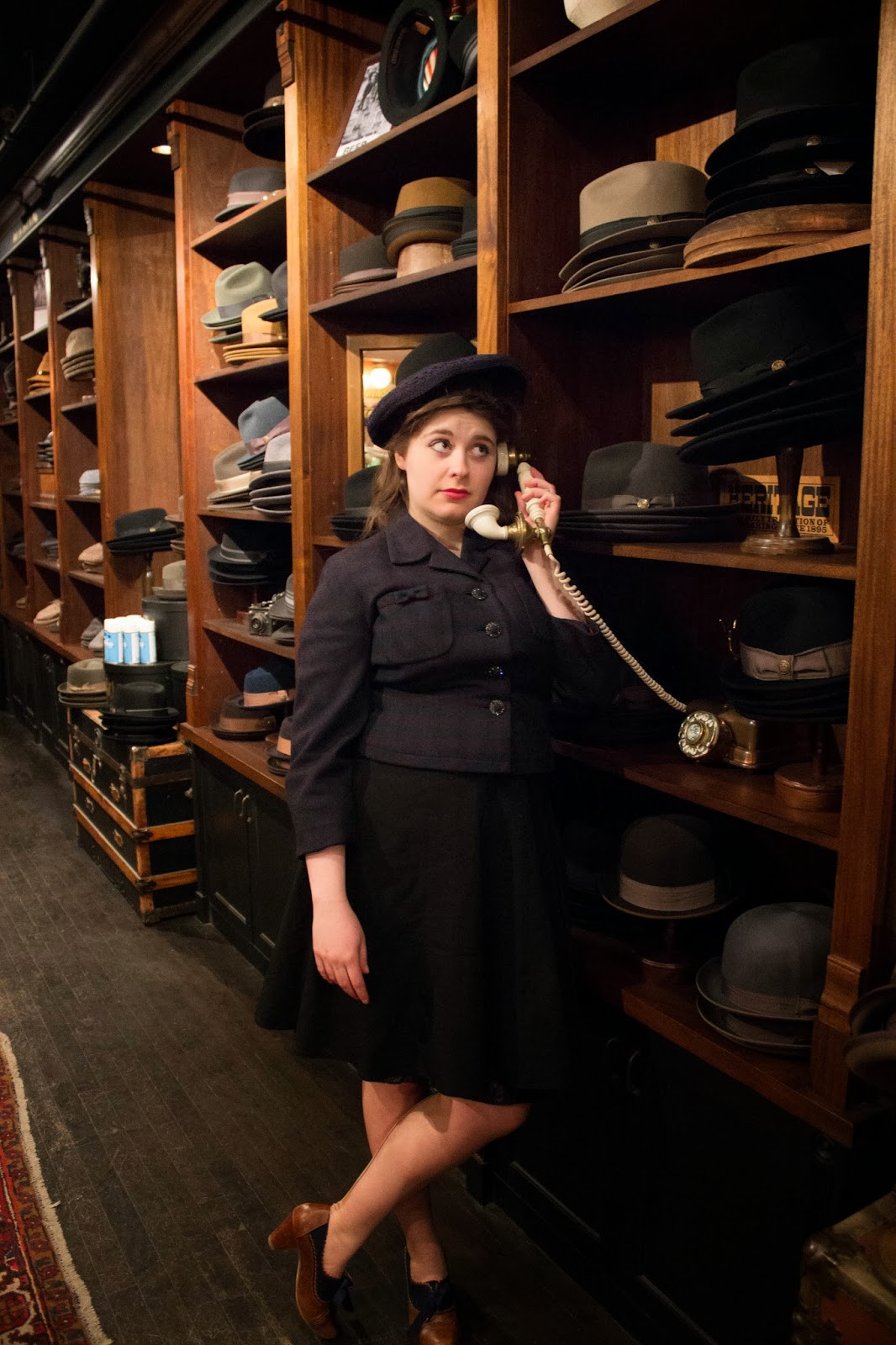 I hope you enjoyed these! It just goes to show that looking fabulous always leads to adventures. And for anyone looking for a new early 20th century hat, or just to drool, I highly recommend hitting up a Goorin Bros. store (there are two in Boston) or checking them out online.
Posted by L. R. Stern at 11:49 PM No comments: