For the last couple of years, my contributions to the Fezziwig's Ball refreshments table has been figgy pudding. Fezziwig's Christmas party is described in A Christmas Carol:

Figgy pudding only plays a tangential role in the festivities, but it is central to the celebration at Bob Cratchit's house. As Scrooge observes,

"In half a minute Mrs. Cratchit entered—flushed, but smiling proudly—with the pudding, like a speckled cannon-ball, so hard and firm, blazing in half of half-a-quartern of ignited brandy, and bedight with Christmas holly stuck into the top."

And of course, figgy pudding is the dessert called for in the carol "We Wish You a Merry Christmas." We sing carols before the ball (including this one), so it seemed doubly appropriate to have some on offer. It also turns out figgy pudding is pretty delicious!


Mentions of figgy pudding (also known as plum pudding, among other names, which is how it appears in A Christmas Carol) have appeared since the 15th century. It was especially popular in America during the 19th century. Dozens of recipes and interpretations were published in magazines and books throughout the century--I particularly love the article "Plum Pudding: A Christmas Essay" published in The National Magazine in 1857:

"But it is not as a work of art alone that I wish to contemplate a plum pudding. I claim for my theme a higher purpose than the mere gratification of the appetite and propose to treat it not only in a gastronomical, but also in national, commercial, geographical, statistical, social, and moral sense. ...Can there be a more thorough embodiment of sociality and good fellowship? Whoever heard of low spirits and plum pudding? or ill temper and plum pudding? or any thing else in connection with plum pudding but hearty goodwill and kind feeling?"

While it's full of dried fruit (not just figs!) held together by breadcrumbs and fat (suet, traditionally), figgy pudding ends up being fairly cakelike. As Mrs. Cratchit "had her doubts about the quantity of flour," this cakelike consistency is pretty accurate for the mid-19th century. The major difference between figgy pudding and desserts we're more used to is that figgy pudding is boiled. It's also traditionally set aflame (or rather, the pudding is covered in a hard sauce which burns off)--something I have yet to try. Instead, I serve our pudding with custard sauce, which is slightly less accurate but entirely delicious. 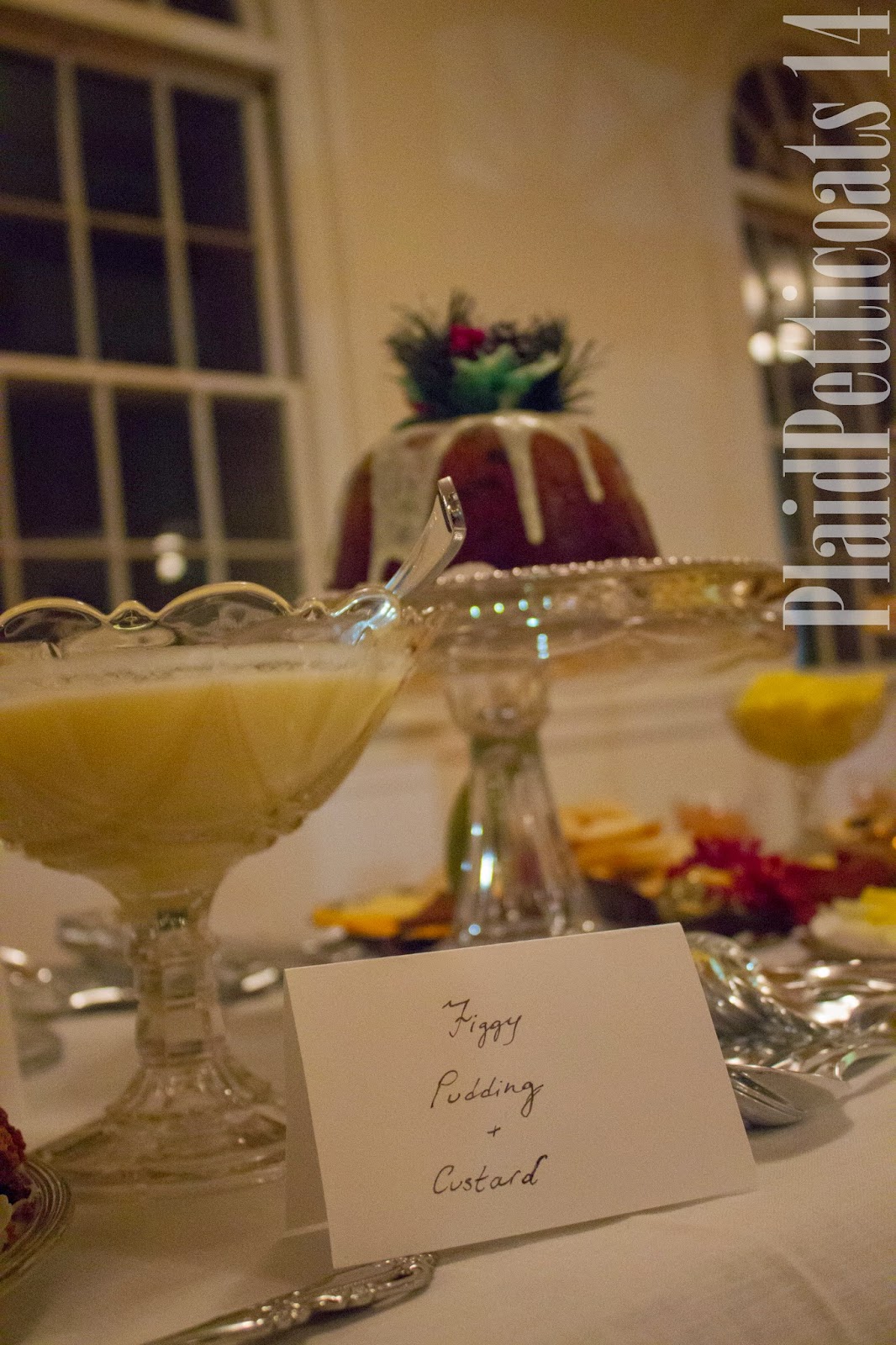 While it takes me most of a day to make the quadruple batch required for the ball, a single figgy pudding is easy to put together and offers a variety of serving options (although my favorite is a tiny piece of pudding drowned in a big bowl of custard sauce. I am definitely pro custard sauce). Although it's a little late for a Christmas pudding, here is my recipe! I've adapted it from this original (which is also where my custard sauce comes from), with changes to make it more period. The one modern concession I make is that I bake the pudding in a water bath rather than boil it. That way I can get multiples cooked at the same time, and it seems to work just fine. Someday I do need to boil and set one on fire though!

This recipe makes one figgy pudding, which I recommend baking in a bundt pan for ease. If you want the traditional round look, go for an oven-safe bowl (I use a 2-liter mixing bowl/pitcher like this one).

Preheat oven to 350F.
1. In a medium pot, combine chopped figs, plums, milk, orange zest, and brandy. Cook over medium-high heat until milk is bubbling but NOT boiling, then reduce temperature to medium/medium-low, cover, and simmer for 10 minutes. Cool to room temperature.
2. Combine melted butter and eggs (adding one at a time) in a large mixing bowl**. When combined, add breadcrumbs.
3. Add fruit/liquid mixture from the stove and stir until just combined.
[3a. Depending on how much liquid was absorbed by the fruit, the batter may be extremely dry. If needed, add extra milk in small increments alternating with dry ingredients so that final batter is a very thick, but still batter-like, consistency. Be careful not to make it too wet! If the flour is adding in just fine, don't add any extra milk.]
4. Add remaining dry ingredients.
5. Fold in nuts.

6. Pour batter into greased bundt pan or pudding mold. Place pan in a water bath so that the bottom 1/2-2/3 is submerged.
7. Bake for approximately 1.5-2 hours. Begin checking after the first hour, as the shape of your baking device can change the baking time a lot. A knife should come out cleanly, even if the inside is still quite soft.
8. Let stand in pan for 15 minutes, then flip onto cooling rack. Cool completely before slicing to prevent crumbling.

*Feel free to add to taste. Caveat: if not measuring make sure to stay true to the proportions!
**I make this recipe by hand using a spatula to mix.

Enjoy! I ended up with a lot of leftover pudding from the ball, so I crumbled it up and threw it in a casserole dish to turn into bread pudding--pudding squared?--to give the leftovers some new life. The possibilities are endless!

So I will leave you with one last Dickens quote--a final possibility for figgy pudding: murder weapon.

"If I could work my will,” said Scrooge indignantly, “every idiot who goes about with ‘Merry Christmas’ on his lips, should be boiled with his own pudding, and buried with a stake of holly through his heart. He should!” 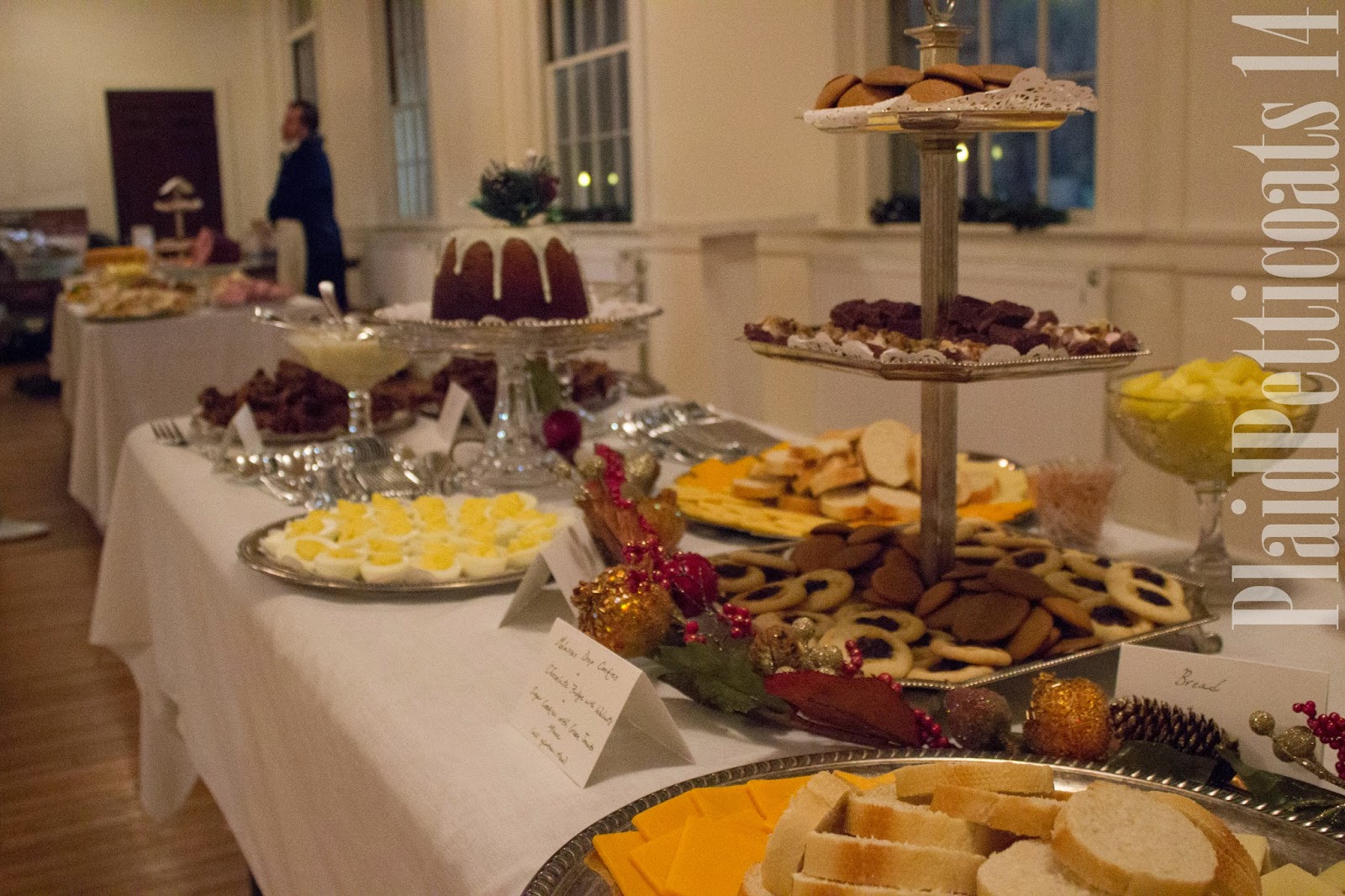 You can read more about figgy pudding here:
NPR's All Things Considered
The History Channel's Hungry History
The University of Maine's KHRONIKOS blog
Posted by L. R. Stern at 12:04 AM No comments:

Earlier in the month, my mother and I wore our new 1870s dresses to Fezziwig's Ball. We were both fully dressed! Success!

I do need to admit that with a crazy work month, I didn't actually manage closures or the ties for the inside of my skirt that will bustle the train and make the underskirt an appropriate length for dancing. It worked out, since I was pretty ill the night of the ball and didn't have much of an inclination to dance, but that definitely needs to be in place for next time. I really cannot stress this enough: please do NOT wear a train to a ball. They aren't meant for dancing, and you will trip someone up! I only danced once (I waltzed with my dad), and I made sure the train stayed up the whole time. I really don't recommend it.

That said, even ill and not dancing much, this was a really lovely evening full of Christmas cheer. Plus. since I wasn't dancing I was able to take pictures!

Although both my mother's and my bodices were both made with the same Truly Victorian pattern, we ended up with very different bodices I think. Mom used the puffed sleeves from the pattern, but I decided to forgo sleeves. I also added a 3 inch band of velvet to the bottom of my bodice, similar to fashion plates like this:

Of course, the most obvious difference is that Mom's bodice and overskirt were the same blue and gold fabric, while my overskirt and bodice were almost inverse (the bodice is plaid silk with velvet trim, and the overskirt is velvet with plaid trim). Mom also trimmed her bodice with gold lace and antique gold buttons she found (which both looked great!).

My overskirt plans had to be toned down a lot due to fabric constraints: I ended up without velvet I liked at the last possible moment, and my heart was absolutely set on velvet...so I went shopping at JoAnns. I have to admit, I am really spoiled--they are so much more expensive than my local, independent fabric store! I could only justify splurging on two yards in the end, but managed to end up with three because it was the end of the bolt (hooray, a holiday miracle!). With less material than expected, my side panels are smaller than I think I would originally have wanted. I have some plans to improve the overskirt, though, with a plaid silk bow at the back and turning the leftover velvet into a train. In the meantime, this version worked for the ball! 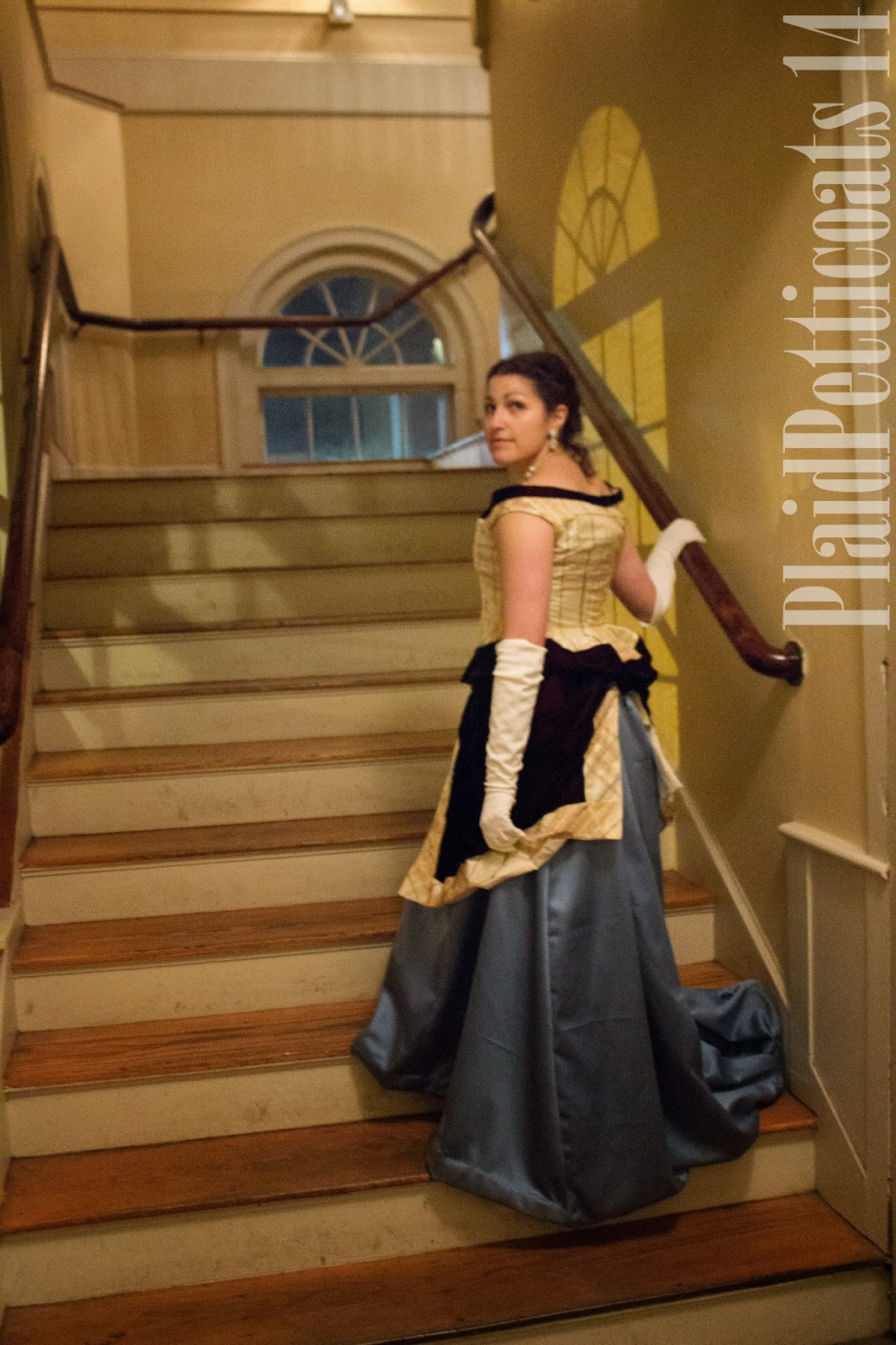 Like many of my fashion plate inspirations, I trimmed the overskirt panels in plaid cut on the bias, as opposed to the bodice which is cut on the grain. I actually really like the contrast there! Figuring out how to make those work turned into quite a headache (I was tired and not thinking well), but I'm really pleased with the final result. 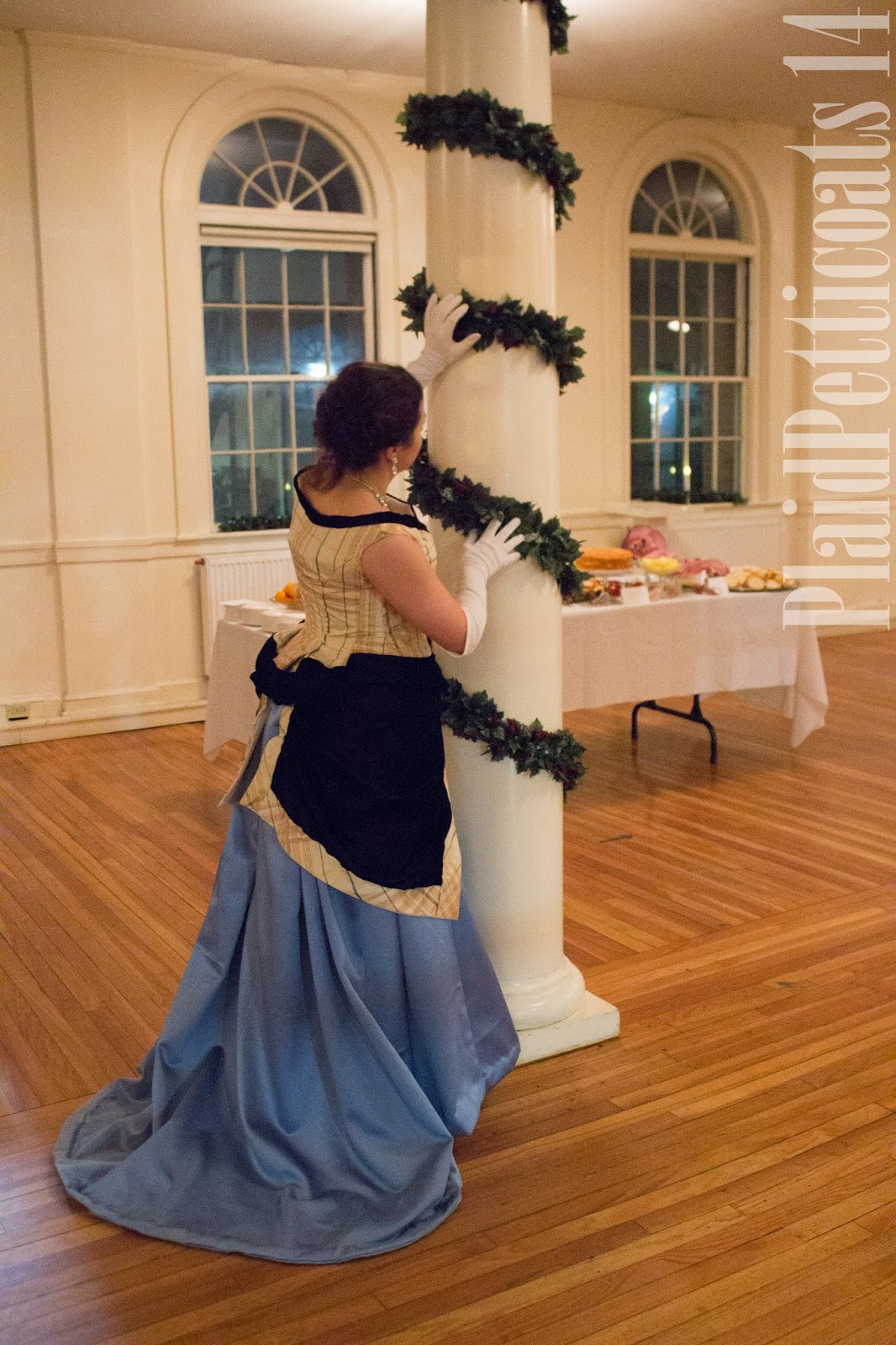 I have to say, I think I have the 1870s bug. I felt so elegant in this, and I can't wait to make the day bodice so I can swan around some more. It was also really nice to work on this with my mother, and I look forward to future adventures with her...she's already brainstorming for next year!

Happy Holidays, everyone! No matter what you celebrated (if anything), I hope it was wonderful!
Posted by L. R. Stern at 11:54 PM 1 comment:

As you might remember, my mother and I have been making 1870s natural form dresses to wear to the annual Fezziwig's Ball hosted by the Commonwealth Vintage Dancers. I've previously posted about my first real (long-overdue) foray into plaid matching in addition to some background research for the project.

I can happily say that we completed our dresses on time (mostly), and they were quite a success!

We mostly worked together on these: I would go out to my parents' house for the weekend, and we would take over the dining room to sew. Despite requiring a lot of supply shuttling to and from my own sewing stash, it was awesome to have someone on hand to help with fitting. It made such a difference. It was also really fun to have the company!


In some ways, construction of both dresses was pretty similar. We both needed bustle pads, petticoats, underskirts, bodices, and overskirts. We started with the same pattern (TV416) for the bodice, but made very different bodices in the end, I think.

I didn't use a particular pattern for the petticoats or skirt, but I took a look at the 1870s dresses in Janet Arnold's Patterns of Fashion to figure out how to curve the seams at the top of the skirt panels. Actually, I treated the petticoats as experiments--they're a little wonky (though totally serviceable), but by the time I got to our actual skirts I had the pattern figured out. Hooray!

Unfortunately, the above picture is the only one I took while we were working. When I kept on working at home, I sent a couple of progress pictures to Mom, so I do have this one of my bodice in progress (no darts yet): 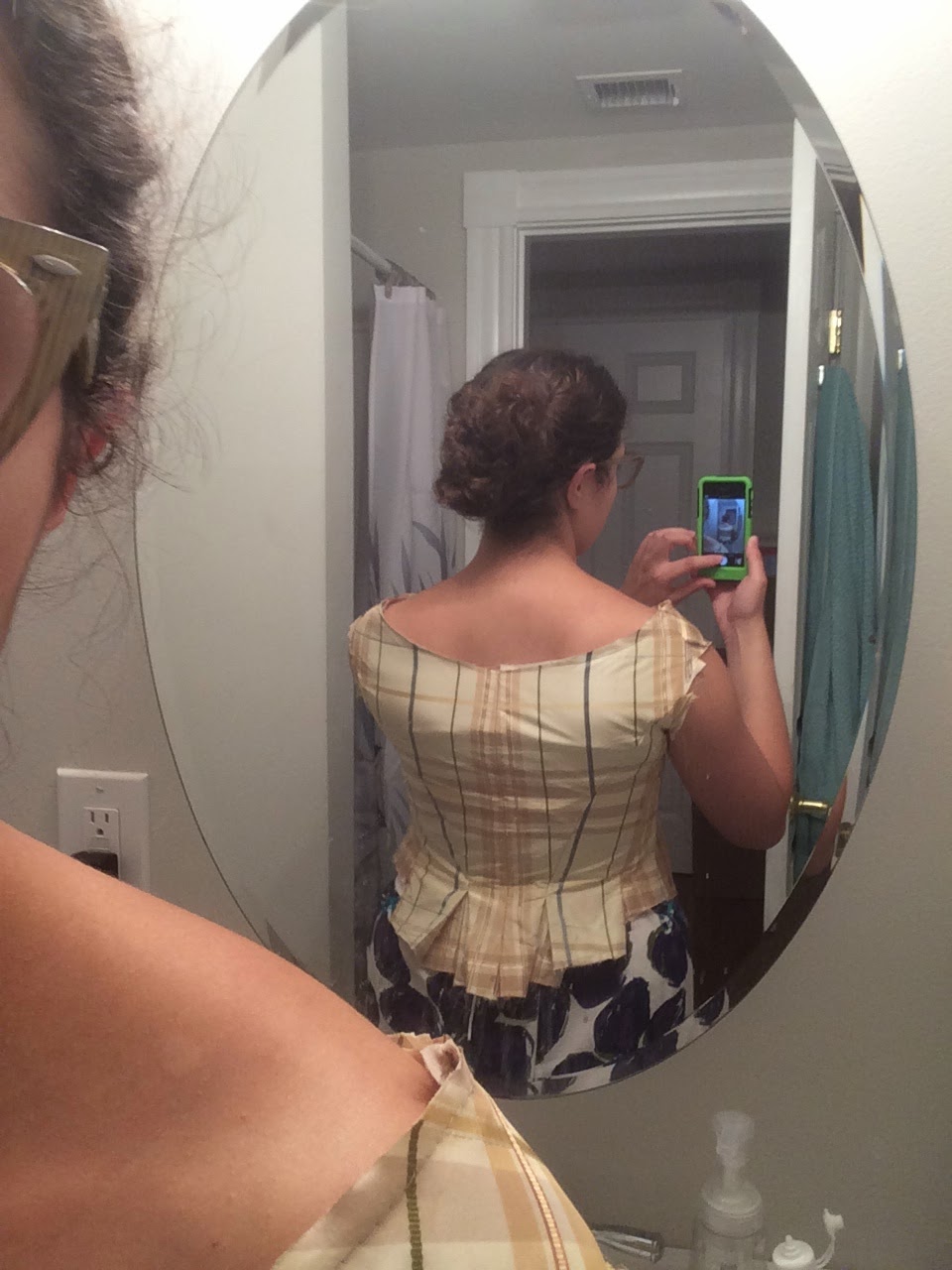 (Ok, I lied, I had two.)
I definitely learned how much easier it is to make things fit well with help during this project. I'm used to trying to do it on my own, or using my dress form, but having my mom pin darts and mark the mockup for adjustments was way easier and ended up with a much better fit. Something I'll have to remember for next time...I'll just start showing up at holidays with projects for her to help me with.

In the end, there are definitely some things for both dresses that need to be adjusted or changed for next year (Mom wants a new overskirt), but we managed to accomplish our goal! Mission accomplished.
Posted by L. R. Stern at 11:16 PM 1 comment: