I could really use a time turner right now.

As the winter wore on but the ice skating ponds closed, my desire to abandon my Slytherin-inspired 1870s winter ensemble grew stronger. But I was so close, and I knew if I moved on to something else I wouldn't ever finish, or I'd take a shortcut after being so good and doing all the things (it has closures!).

Friday night I finally put in the finishing stitch...just in time for the weather to warm up everything to turn to freezing slush and there to be no good outings planned until next winter. I really wanted to wear the darn thing at least once though, and so The Boy and I took a stroll through our urban neighborhood while he did his best to get some decent photos.

Real photos will follow next winter, but for now: evidence of a completed project I am quite proud of! 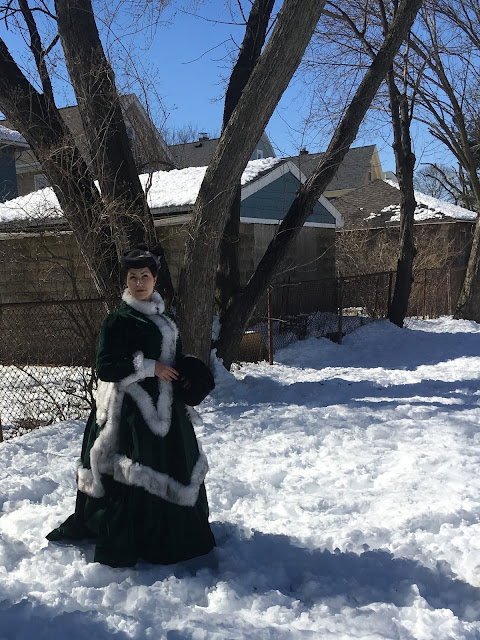 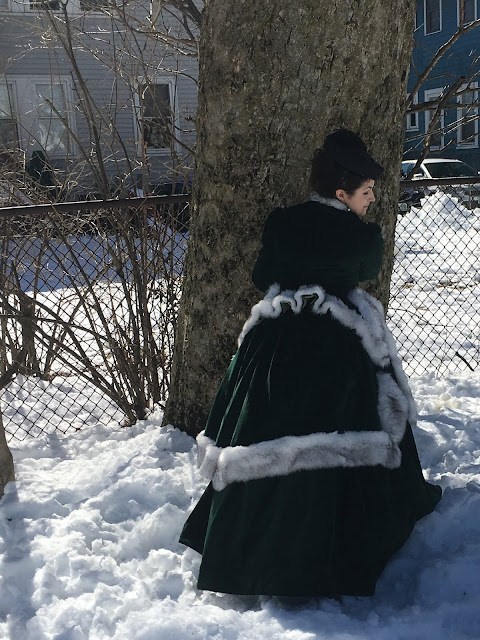 The underskirt is unlined and faced with green upholstery velvet (it's quite stiff and I had it in the stash...I have a limited color range it appears). Most importantly, it has a pocket! The overskirt is partially lined with the same silk I used inside the bodice to keep it from sticking to the other layers. The bodice, which I previously showed in progress, now has closures and a collar in addition to sleeves (which I drafted using the TV402 pattern as a guide--I decided I didn't want giant trumpet sleeves for this particular outfit).

Both the overskirt and bodice are trimmed with faux fur. I had a really hard time finding fur I liked for this project, which ended up eating a week and half in February. I wanted gray, and something that looked and felt like real fur (rather than soft, baby blanket "fur" that doesn't look remotely like a natural thing). Getting that combination turned out to be really tricky, as most furs that had the right feel were brown or black, and pretty much everything I found in gray wasn't what I was looking for.


I tried ordering online, which went terribly as you might expect. In the end I took an early-morning trip to a store near my office and spent a long time waffling in the fur aisle. I ended up with a dense, long-piled option that is white with gray tips. I worried it read as too white, but I liked it so much better than any of the "gray" furs I found that I decided I would rather be fluffy...and in the end I think the mix of colors looks more natural than anything solidly gray anyways. I do want to give a shoutout to the McCall's blog, which had some really handy tips for working with faux fur without causing it to shed everywhere or clog my machine. That was really helpful!

In the end it fits well, it is entirely finished, and it was a lot of fun to wear (even if this time that wearing was just a hike through the very modern urban jungle). Now I can say goodbye for the season, knowing that whenever I have the opportunity to bustle it up next year I can pull this out and throw it on, no assembly required. 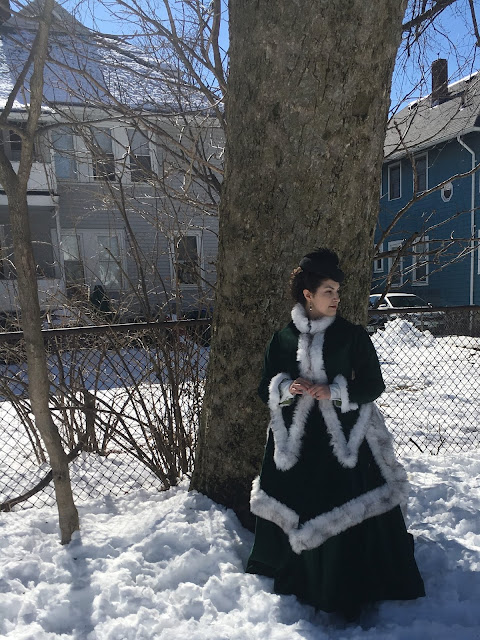