In November 2013, I participated in the America's Hometown Thanksgiving living history event for the first time as a women's suffragist. Since the only 19teens clothes I had up until then were evening dresses, this also meant making a new ensemble. I'll be honest: ragtime styles have never particularly called to me, so I decided that if I was going to put in the time/effort to make a 1914 outfit, I wanted to make something a little crazy and very fashionable for the early 1910s. After some poking about, I settled on making a "hobble skirt"--a skirt that narrows perceptibly at the knee, with such a narrow hem it actually interferes with taking a full stride.

Hobble skirts were all the rage, but they were so dumb. There are newspaper articles from the period (you can read examples here and here) discussing the difficulties for walking, getting into and out of cars or trams, and generally functioning in these. Naturally, I thought they were hilarious and I wanted one. (Not to mention, I figured they'd be easy to do and I needed a quick project).

So I did make a hobble skirt, and it came out pretty well! But it was super dumb, and I spent all day getting laughed at (good natured-ly by my friends, and not so kindly by some of the other participants).

It frustrated me. So this past November, when I started planning for our suffrage rally round 2, I knew I wanted to widen out my hobble. Because not only was it frustrating and super dumb to wear, it also made me realize that the hobble skirt represented the exact attitude suffragists were fighting.

There seems to be an attitude in articles about the fad of "stupid women, wearing clothes they can't move in." There was even a movie from the period called The Suffragettes and the Hobble Skirt (1910), which seems to not exist anymore, but the plot of which is described as "a persecuted man gives women hobble skirts and they are jailed." Essentially, the hobble skirt fashion is used as women's own downfall from their fight for the vote (source on the film here).
I'm not trying to argue that women who were suffragists did not ever participate in popular fashions, or that a suffragist would never wear a hobble skirt. It's absolutely possible--believing women should have the right to vote doesn't mean you can't also like dumb things. (I certainly believe in both women's rights and dumb fashions.) But I do think that when we, as living history presenters, wear historical clothes at events, we might be the only exposure some people have to the period--and that is worth keeping in mind when planning ensembles. That first year, wearing the hobble skirt, I encountered a lot of the same attitudes from other people at the event that I encountered in texts from the 19teens.

And that definitely wasn't the impression of the women's suffrage movement I wanted to present.

So the night before our second round of rallies I set to work (I know, I know...last minute...). The first step was to release the pleats from the original skirt, to give my self full range of motion. It's still narrow, in keeping with the 1914 silhouette, but with enough room to function. Next I used the leftover fabric from the stash (thank goodness for buying too much!) to create an over-layer, which made the now very boring skirt tube look way more interesting.
I took inspiration from the layered skirts in fashion plates like these:
I ended up with something I am much, much happier with.

I think in the end the over-layer is too long (it was supposed to be sorter, but it kept sliding down my hips), but aside from that I'm really satisfied with this. The plaid wool is warm, the shape is fun and stylish, but most of all--it's functional. I did just fine climbing around all day in 20 degree weather (well, I could move...I was pretty cold!), and I didn't feel super dumb. Hooray!

And I do mean this is functional, even though it still keeps the narrow look. I even went ice skating in it as part of our 1890s weekend in January! (Also, since we were ice skating, these are all cell phone pics...sorry!) 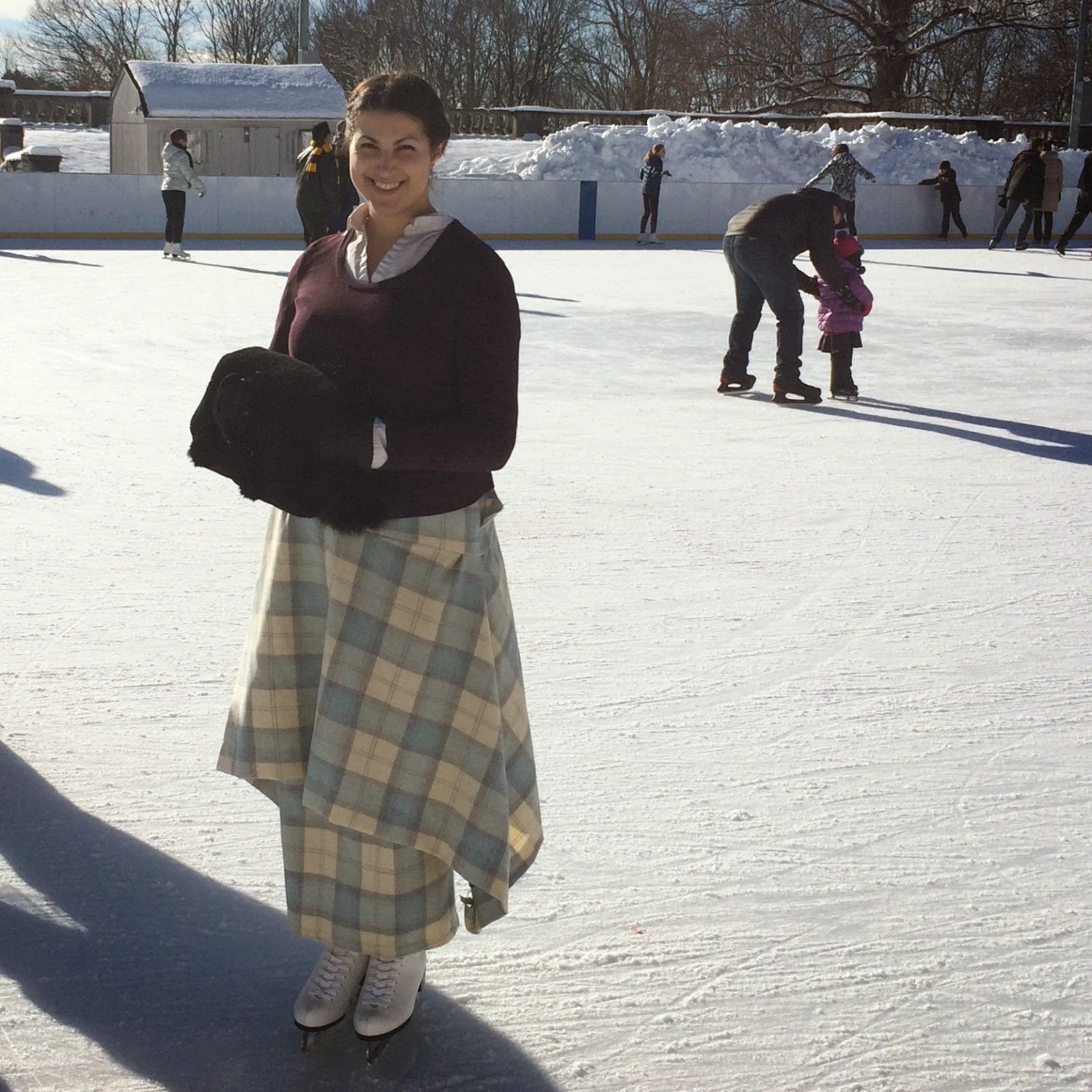 In the end, I'm happy with this project--and I'm excited to wear it again as we rally!

Highlights from Battle of the Bulge at Fort Indiantown Gap

So somehow the month of January got away from me. It might have been the 6 consecutive weeks of travel and events, or the snow, or the holiday recovery, or being sick...but it doesn't really matter. What actually matters is that every event was a blast, I don't regret a thing, and I feel super enthusiastic about getting some of my post backlog up and published!

But that's all coming later--today, I wanted to share some photos from my most recent excursion: the Battle of the Bulge event at Fort Indiantown Gap in PA. This was only my second WWII event, and was a completely different experience from the first. For starters, it was winter. Hooray for period outerwear! Whoo, we needed it! Second, unlike WWII Weekend at the MAAM, the Gap was only open to the public on Saturday (the last day of an almost week-long event); so instead of large public displays, for the most part this event was just reenactors doing their thing. It was super fascinating. I'll admit that I oscillated a lot between feeling in the thick of things and feeling like a complete outsider (an anthropologist of sorts, I suppose), but I enjoyed myself immensely.

Even better, I got some great shots! Which is more of a miracle than it may seem, because I shot exclusively with my retrofit Speed Graphic, which meant I was shooting blind a lot of the time.

As usual (because my camera is occupied during these events), I don't have very many pictures of myself, and none of me in action yet. I'm hoping to grab a few from other generous attendees, but in the meantime, here are some highlights from the event! 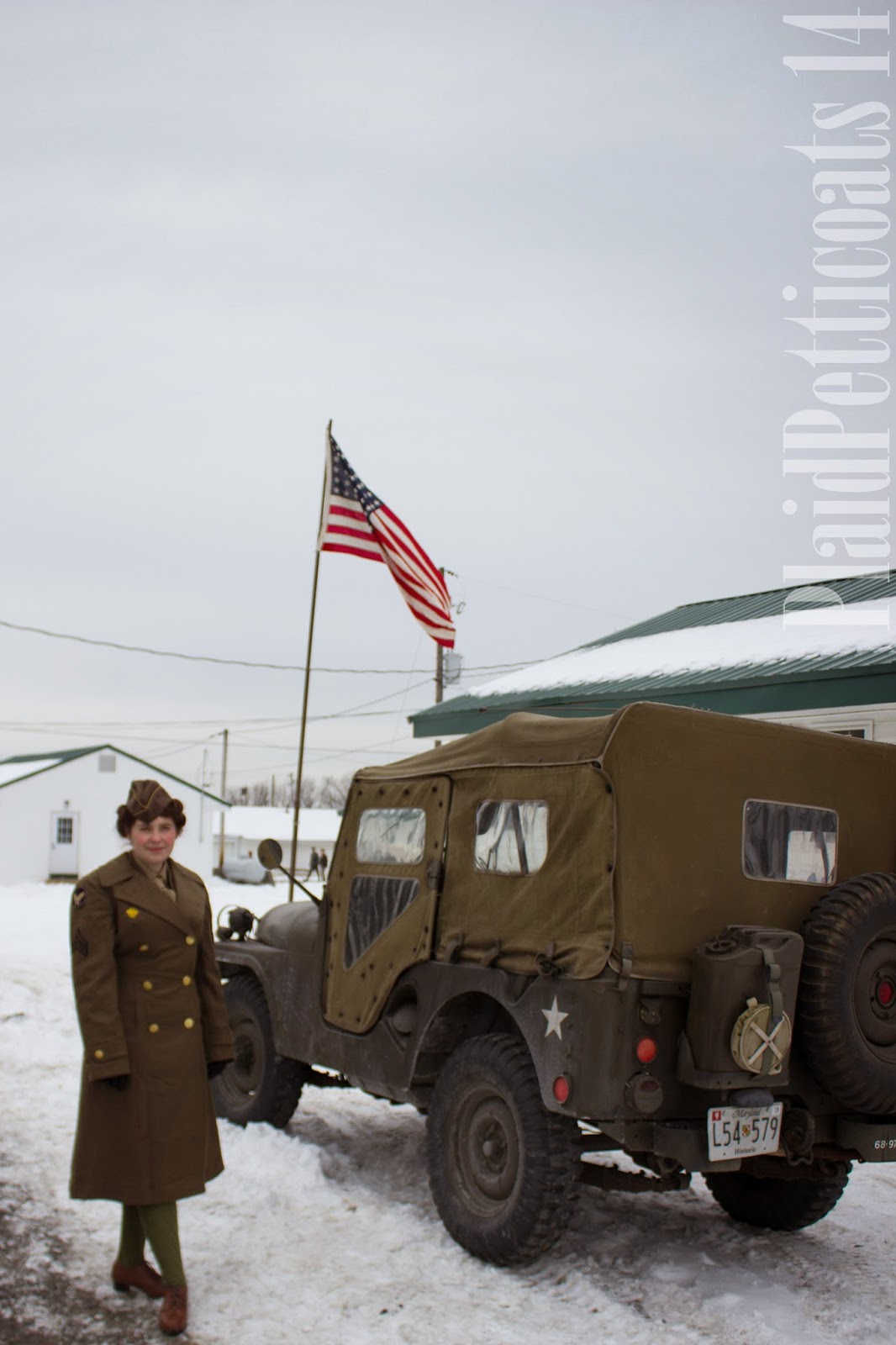 The Fort Indiantown Gap event is supposed to be based on the Battle of the Bulge, which took place in the Ardennes region of the Western Front (which includes Belgium, France, and Luxembourg) from December 1944 to January 1945. The German offensive hit American troops particularly hard, resulting in the highest US casualty rate of any operation during the war. While eventually a victory for the Allies, the Bulge was particularly grueling due in part to frigid temperatures, the high casualty rate, and contention among British and American leadership. Churchill called the Battle of the Bulge "undoubtedly the greatest American battle of the war and will...be regarded as an ever-famous American victory."


I have been told that one of the things that makes the Gap event so neat is the tactical exercises, which allow reenactors to get into the nitty-gritty of battle. The event is held on a National Guard base, so units convoy up into the mountainous exercise area for the battle parts of the event, which last over two days. We faced some gruelingly low temperatures ourselves during those days, but unlike in 1945, the higher-ups cancelled the second day of the tactical for safety reasons. That was the day I was planning to go out, which was disappointing. Instead, I shot the smaller public battle demonstration held in a wooded area near the barracks (which is why my photos are full of brush). It wasn't exactly the Bulge, but it was still an adventure to run about getting knee-deep in snow to try and get the shot while staying out of the way of the oncoming line! 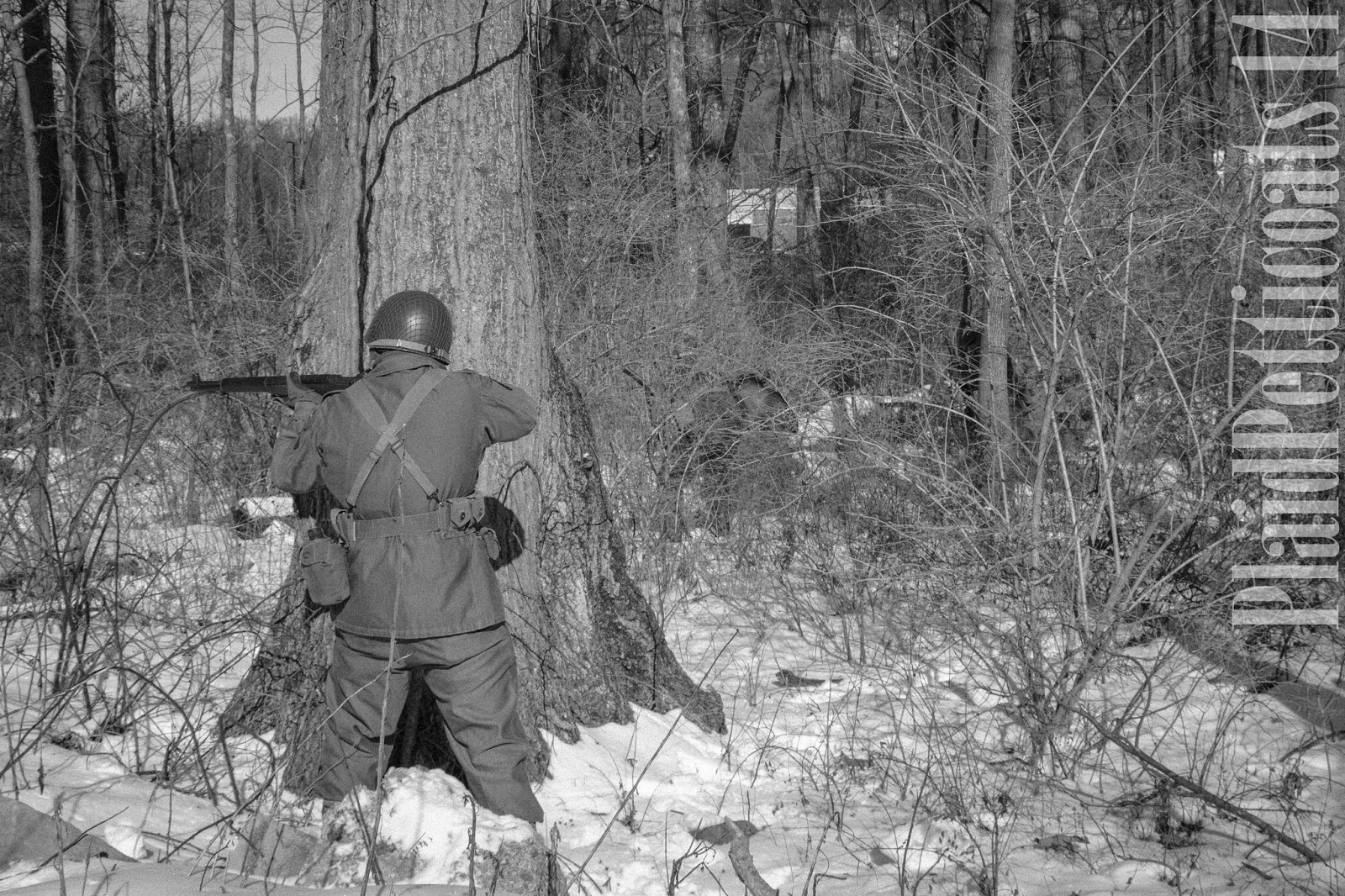 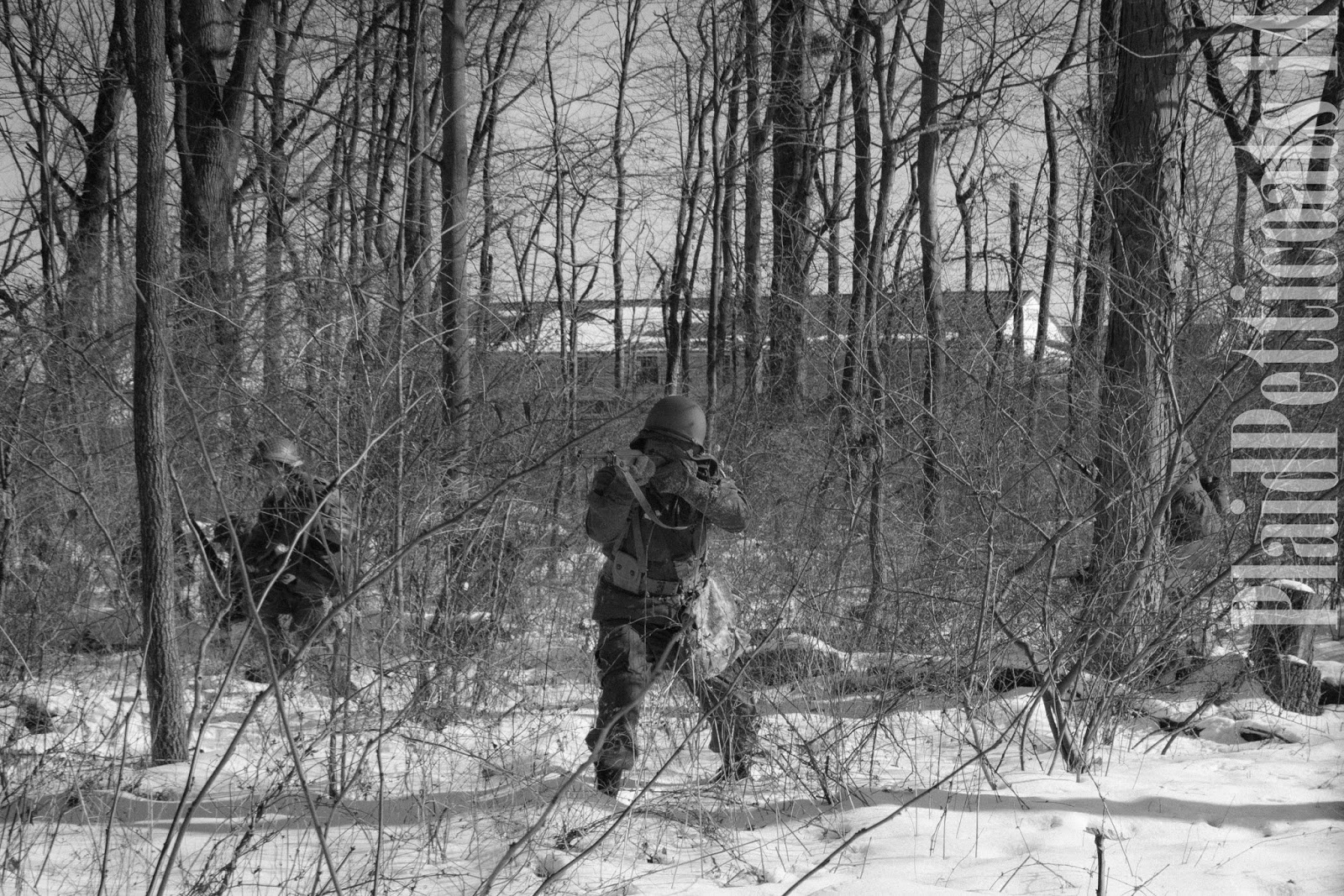 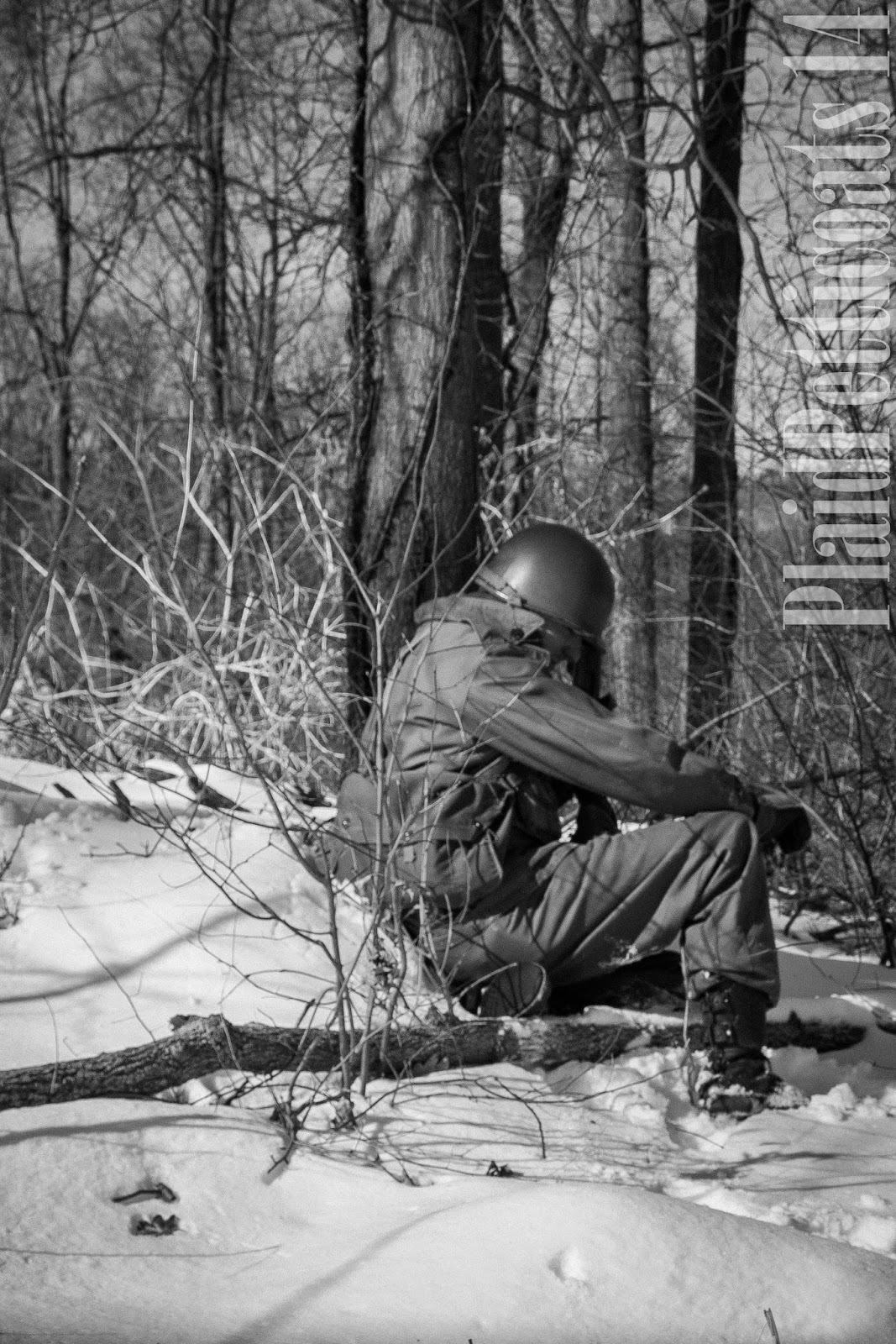 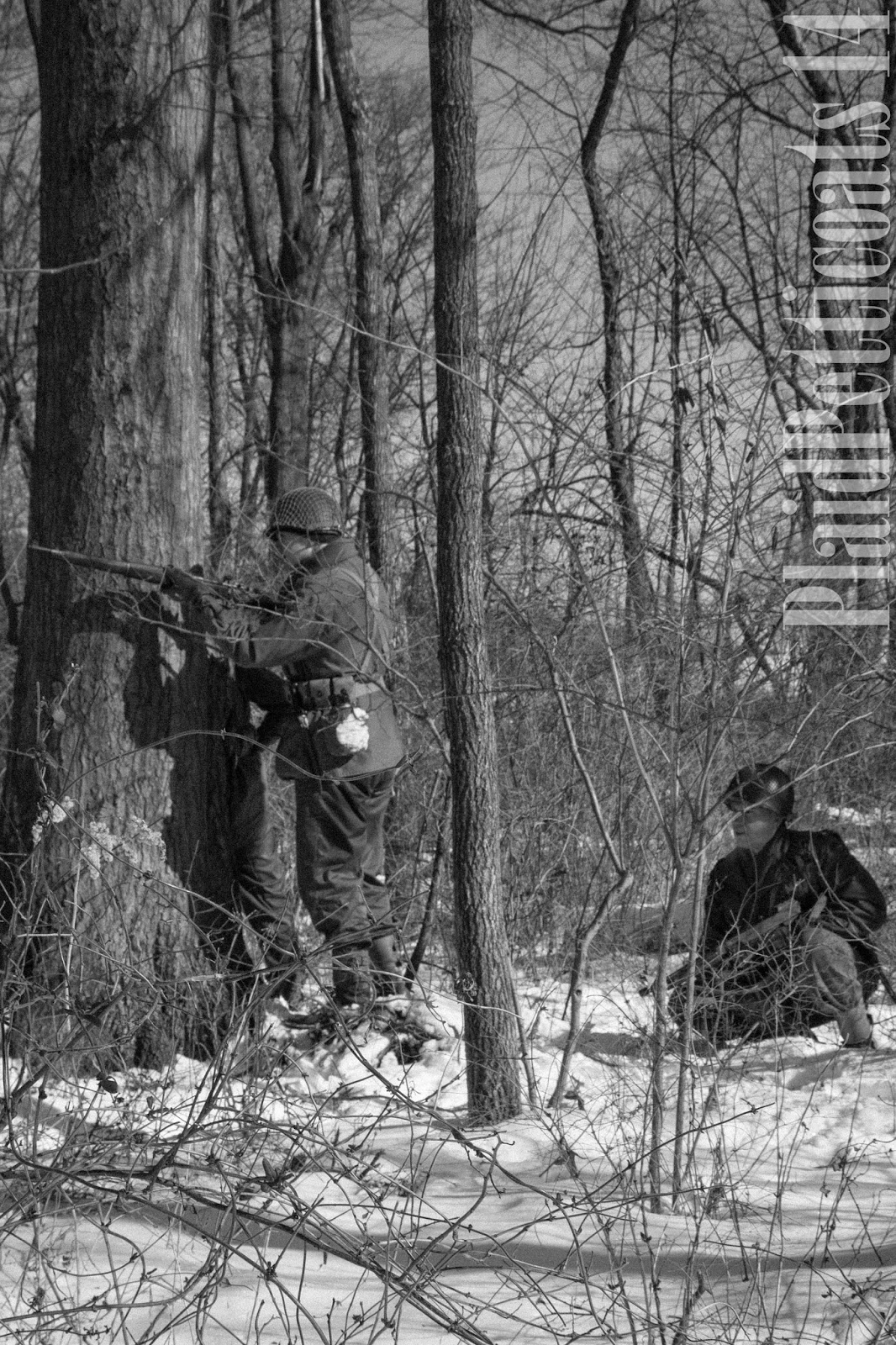 "I just really hope we get some snow. I want dramatic snow pictures!" Might be something I said several times in the week leading up to my most recent excursion into the 1940s. Whoops?


On the other hand, I'm clearly not the only person to ever think the snow made for a dramatic setting. People have been capturing the perils and playtimes of snow days in Boston for over 100 years, which is pretty awesome. The Boston Public Library has a fabulous archive of some of these images, taken by Boston Herald-Traveler photographer Leslie Jones.

Leslie Jones preferred the term "camera man" to photographer, and while he was interested in taking pictures from a young age, Jones actually began adulthood as a pattern maker in a Boston factory. During that time, he also did freelance photography work, capturing the city as he saw it.  When he lost two fingers in a factory accident, Jones went to work for local newspaper the Boston Herald-Trader full time in 1917. During his 39 year tenure at the Herald-Trader, Jones covered everything from the day-to-day excitement of Boston, to historic events (e.g., Lindbergh's flight across the Atlantic), to local baseball at Fenway Park. After his death, his family donated an incredible 40,000(!) negatives to the archives at the Boston Public Library, and the collection is available online here if you'd like to take a look--I really recommend it.

So really, not much has changed!