When Reconstructing History is Delicious

I've been thinking about food a lot lately.

This is probably because I have been travelling a lot, which makes me both acutely aware of how difficult it is to eat enough vegetables when I can't cook, and excited to explore regional cuisines (breakfast tacos in TX, for example). This is probably also because we just had Returning Heroes, and the Regency Weekend is less than a month away, so there has been a lot of discussion lately about refreshments.

Refreshments vary--some balls have big, lavish refreshments, while other balls are more casual--but when CVD aims for flashy food, it's just as much a chance to crack open some food history as it is to crack some eggs. Or 20 eggs. It happens.


What we eat has changed a lot throughout history, developing to reflect availability of new ingredients, new technologies for cooking, local tastes, and the developing cultural palette. There will always be old recipes that sound sort of terrible to modern sensibilities, but there are TONS of really delicious-sounding recipes that can be explored for all sorts of entertaining, both intentionally historical (like balls) or modern (let's make syllabub the newest potluck sensation!).

The one problem with 19th century recipes is that the context in which they were written and/or published--the measurement systems, baking technology, etc.--is very different than modern expectations. Sometimes, even the "modern versions" of period recipes don't quite work. As I get ready to bake "Dolley Madison Cookies" for the Regency Weekend, I thought I'd share a little bit about the process of reconstructing recipes for a modern kitchen environment.

Here's an example of a sugar cookie recipe from slightly later than FLOTUS Dolley Madison's cookies, but with a very similar description:

I could probably get a kitchen scale (I used to use one when I was studying in Scotland), but I'm lazy and then I'd have to figure out pints and things, which I am unwilling to do. So I'd much rather modernize this!

There's an article about cookies in Austen's time on the Jane Austen Centre website, and that's where I stole this modernized recipe for Mrs. Madison's cookies from (based on the recipe just below it):

To Make Sugar Cakes
Take 3 ale quarts of fine flowre, & put to it a pound of sugar, beaten & searced; 4 youlks of eggs, strayned thorugh a fine cloth with 12 or 13 spoonfulls of good thick cream; & 5 or 6 spoonfulls of rose water; A pound & a quaeter of butter, washt in rose water & broaken in cold, in bits. knead all these ingredients well together . after, let it ly A while, covered well, to rise. then roule them out & cut them with a glass, & put them on plates (a little buttered) in an oven gently heat. all these kinde of things are best when ye sugar & flower are dryed in an oven before you use ym.


The thing is, after making this recipe several times, one thing became clear: there was no way in hell I was going to be able to ever roll these cookies out. They were sticky, the edges always burned, and there was no way they looked nice enough to serve at a public event. Which is too bad, because they are so very perfect as a vessel for syllabub (a period recipe that is basically whipped cream with wine). So I set out to adjust.

Based on period descriptions, I knew these should be closer to a cakey consistency than a sugar cookie consistency--kind of like modern madeleines. With that in mind, I sought to fix the problems I was having with the proportions without actually changing the consistency of my final result, which seemed right. I also tried to figure out a way to make these happen in one bowl, which I failed at slightly, but oh well.

So here is my final result! If you decide to try making these, please let me know how you do...or you could come sample mine for yourself at the Regency Weekend this April.

Preheat oven to 375.
In the bowl of an electric mixer, beat egg whites until they reach medium peaks. (For me, this is slightly before I hit meringue territory, so that the whites appear soft but I can still tip the bowl upside-down and nothing falls out.) Gently transfer beaten whites to another bowl for safekeeping, and then add the butter and sugar to the electric mixer bowl. Cream the butter and sugar until light and fluffy. Add the egg yolks, cinnamon, and baking soda.
With the mixer on the lowest possible speed, begin to slowly start to add the whites back in. Once about half have been incorporated, just fold the rest in with a spatula. The goal is to mix as little as possible here.
Add the flour, about a cup at a time, mixing as slow as possible, as little as possible.

Once all of the flour has been thoroughly combined, spoon batter/dough (it should have a slightly in-between texture) in large tablespoons onto greased cookie sheets. Try to keep the blobs as spherical as possible, as this will make the cookies prettier and rounder after they are baked.
Bake for about 8 minutes, adjusting time as needed so that the cookies are baked through but not burnt on the edges.
Let cool in open air for about an hour before storing in your container of choice. Adding waxed paper between the layers also helps keep the cookies from sticking or getting damaged during transport. 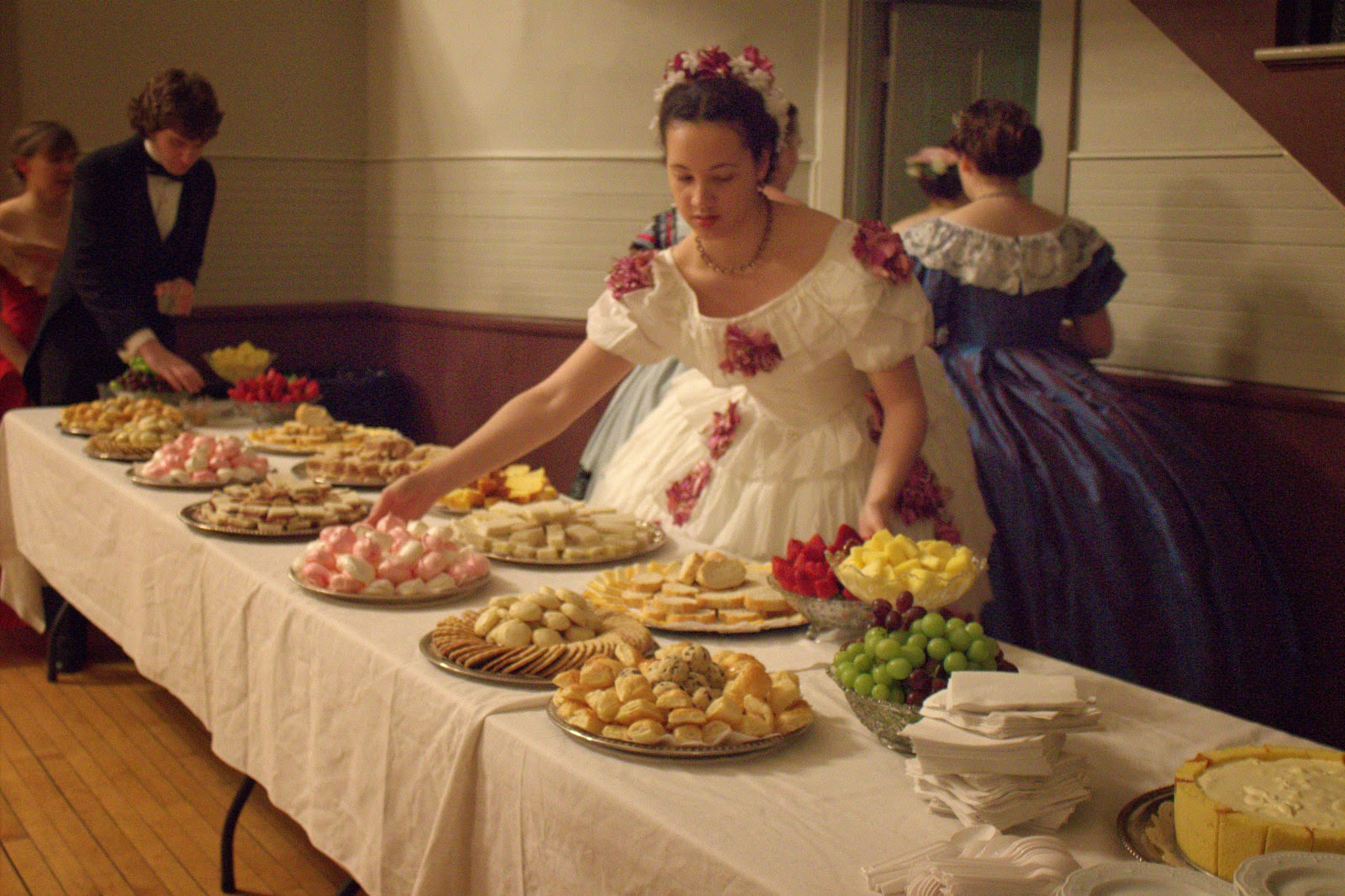 The Fit's the Key

Last night was Returning Heroes, an annual ball hosted by the Commonwealth Vintage Dancers in Holliston. Returning Heroes is super special, because it is the only ball of the year at which period costume is required. It's a lot of fun, Spare Parts is wonderful, and 60s clothes will always be my favorite evening wear. This year was a smaller crowd, but just as lively as always and everyone seemed to have a great time!

I've had a lot going on the past couple of months, and I really want to make some new things for the Regency Weekend in April, so I decided not to make anything new for this ball. Instead, I worked on fixing the dress I wore last year--fixing issues is something I rarely do, and I need to get better at making it a habit. What a difference it made!

When I originally made my pink plaid ballgown last March, the waist was too long. When the dress was on over my hoops (with the waistline at my waist, where it was supposed to be), there was too much room in the bodice, and it meant the whole bodice was wrinkled and the neckline gaped. To fix it, I should have taken the skirt off the waistband, shortened the bodice, and reattached the skirt higher up...but I really didn't want to do that. I had a lot of trouble cartridge pleating this fabric because my thread kept breaking, and I was afraid undoing the waist seam would ruin the pleats. So instead, I took a tuck out of the waist just above the seam--the adjustment was visible, but I made a quick velvet sash to cover it. Voila! A bodice that actually fits!

I am always discouraged when I finish a project and it doesn't fit perfectly, but making adjustments is part of why clothes I make for myself could end up fitting perfectly once I fix them. I need to get in the habit of doing that, rather than abandoning the project or learning to live with the bad fit. Lesson learned! 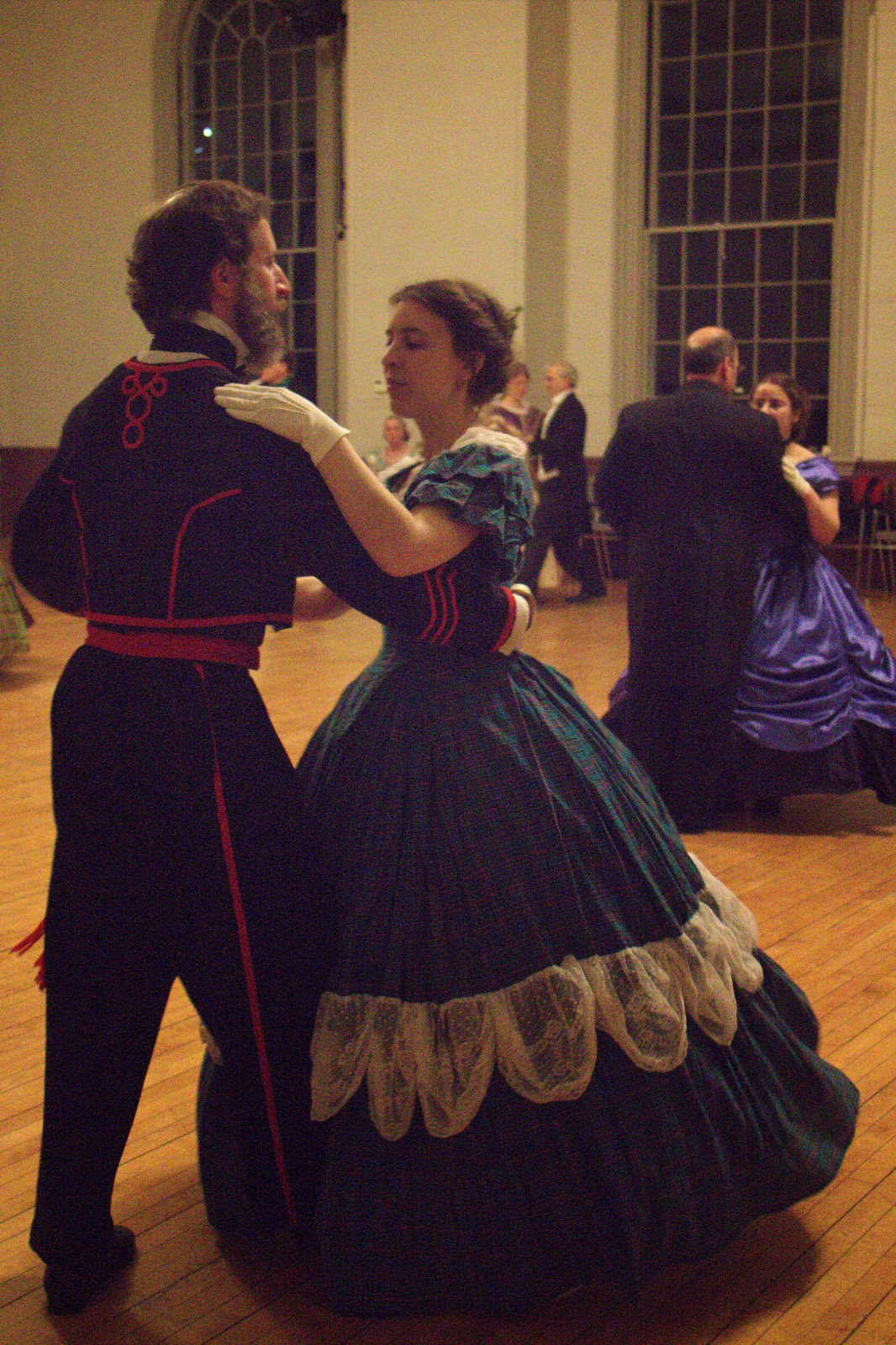 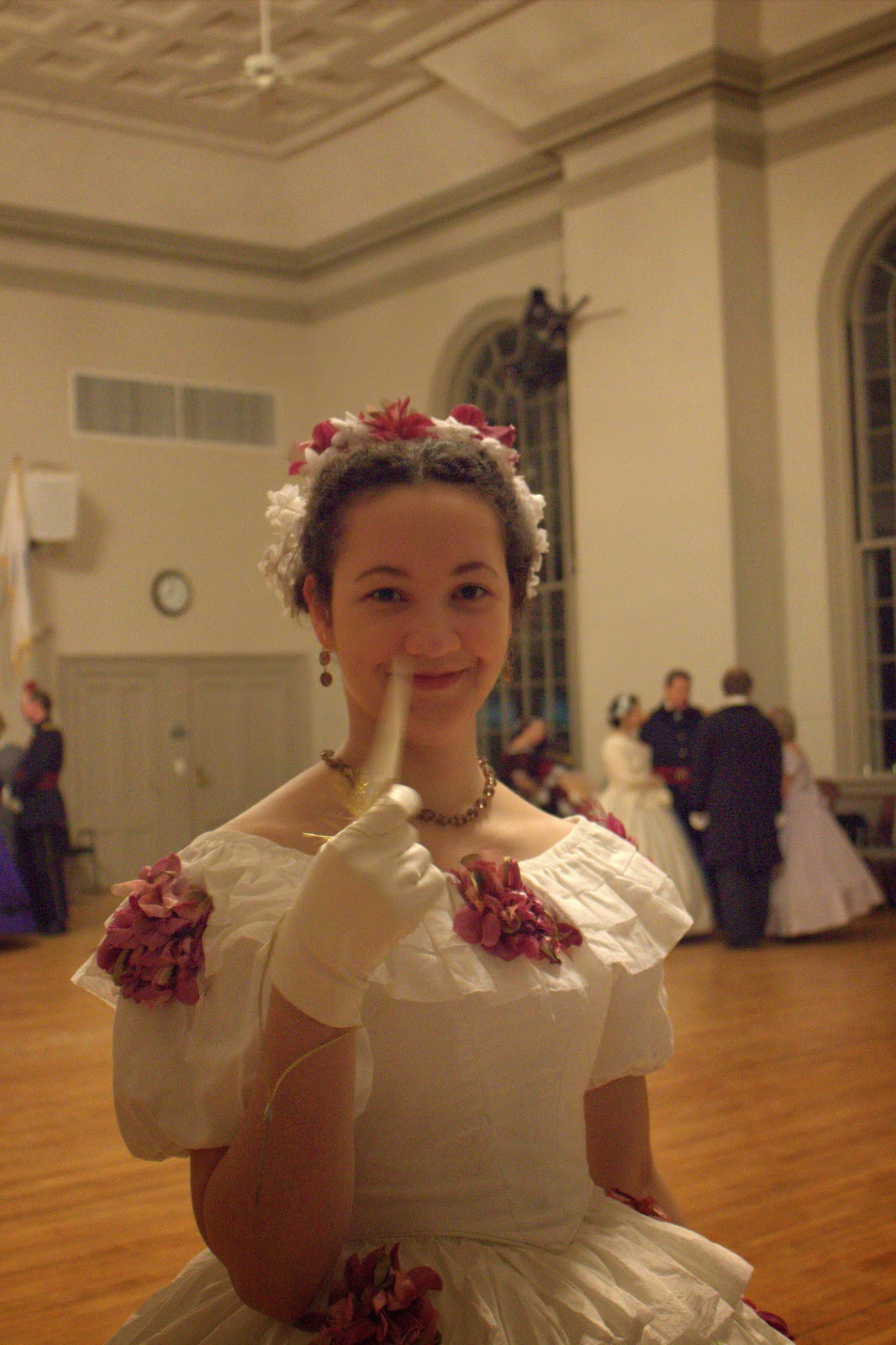 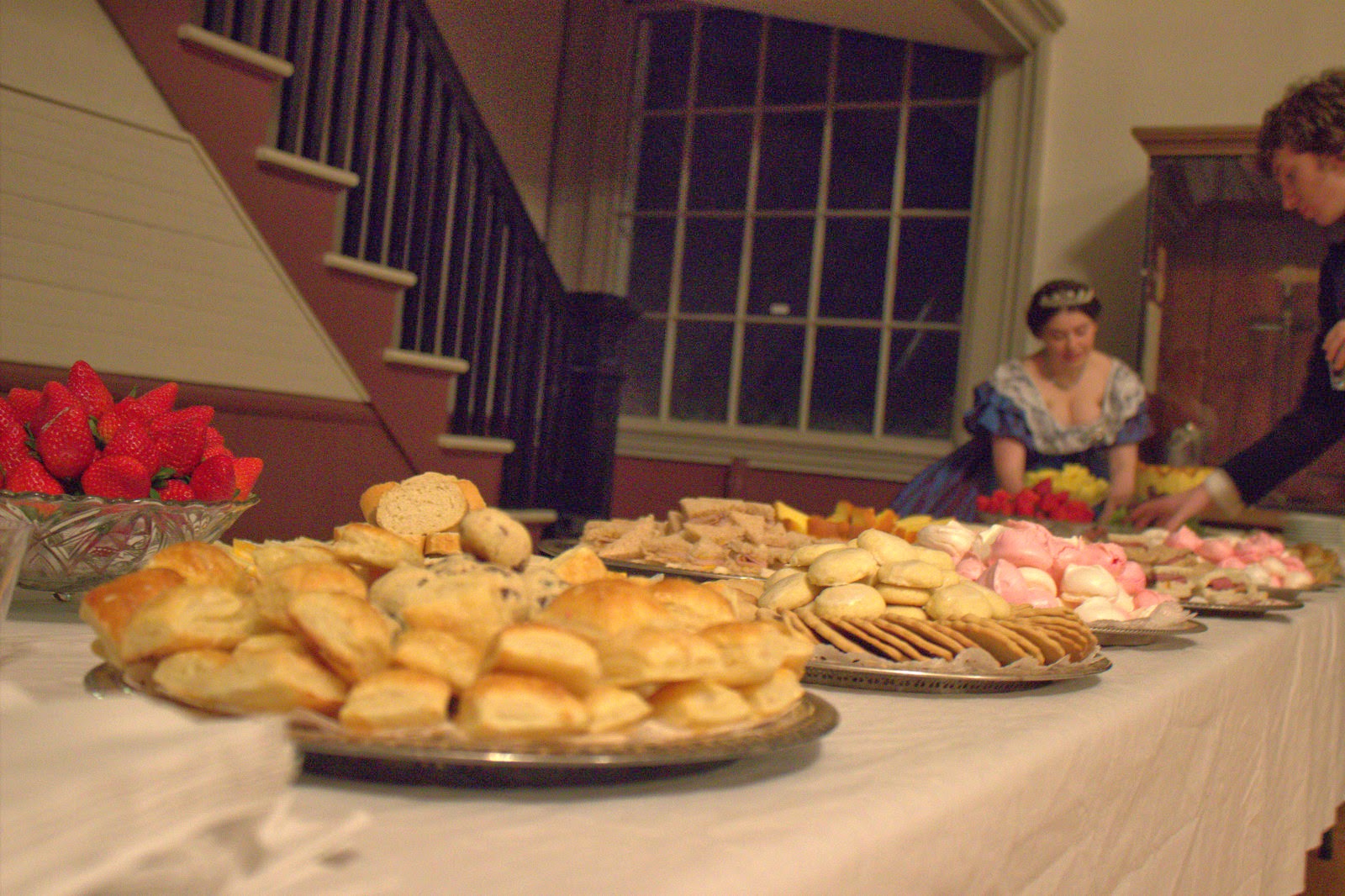 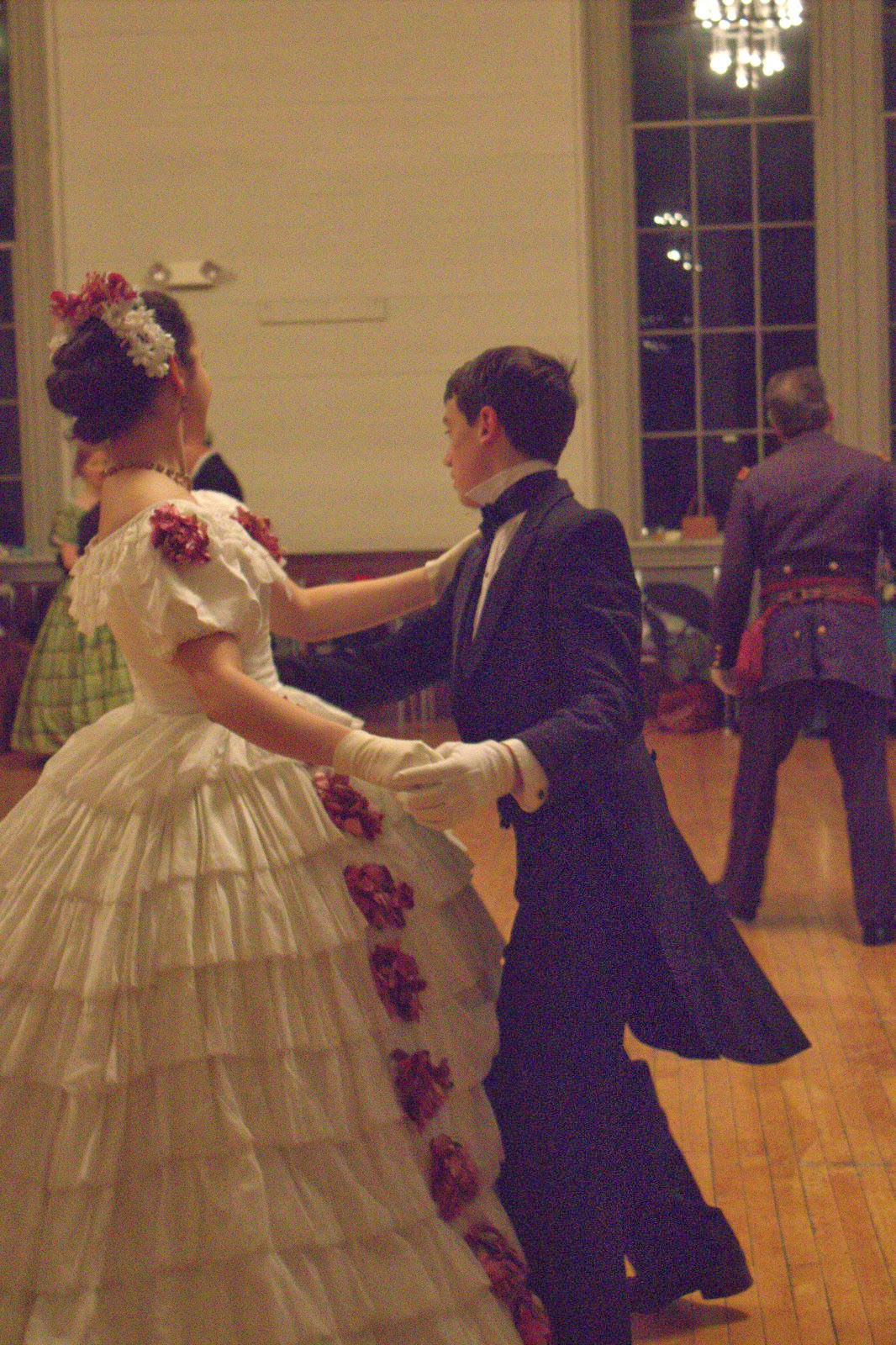