This weekend was the 1890s ball and skating outing with the Commonwealth Vintage Dancers, and I was really pleased to have my friend KP come visit to join me! Of course, that also meant I needed a new dress...

I'd been planning to make a new 1890s dress eventually anyways, because my butterfly dress has a lot of fit issues and I've had it for several years at this point. (Although I will admit the changes I made for a ball this summer--which I've never blogged about, bad blogger! but Quinn has, and it was also covered by Bill Cunningham, so you can spot me in group shots there--greatly improve my feelings about the dress.) Anyways, I'd been planning a new dress...but this ended up being sort of the "murphy's law" of sewing plans: first I had a business trip that put me behind on sewing projects for earlier in the month, then I got horridly ill, and then I was sitting in the ladies' dressing room sewing when I was supposed to be setting up refreshments. Whoops.

I didn't have time to go fabric shopping, so I used a blue velvet I had in my stash originally purchased for the 1870s dress I made at Christmas. It is gorgeous, plush stuff that looks quite bright in some light and quite dark in other light. Like magic! A friend also nabbed me some white rabbit fur trim, which is a fabulous contrast. Right now there's just a bit thrown on, but I have 16 1/2 yards of it, so that's coming!

I knew I wanted to make a super classic 90s dress with big sleeves, because my butterfly dress doesn't have them. I drew inspiration from portraits of the Russian royal family as well as some of the dresses belonging to Empress Maria Fyodorovna. Here are some favorites:

Years ago I purchased 1890s skirt and bodice patterns from Laughing Moon Mercantile, but when I started working on this project I decided I didn't have time to make a toile (as it was already the week of the ball), and I knew the bodice pattern didn't fit me very well straight out of the envelope. Instead, I ended up using the 1875 bodice pattern from the Mother/Daughter Dress Project because I knew it fit well. I switched the closures from front to back, shortened the bodice to end at my natural waist, and raised the neckline up slightly on my shoulders. I did stick with the Laughing Moon 5 gore skirt pattern, but I re-curved the top of the panels to make it fit more snugly on my hips without losing the volume at the hem.

There are still some adjustments to make (a hem, for instance, would be good--this will get a stiff linen interfacing as well as a velvet facing to help keep the shape), but overall I'm happy with this. I definitely felt regal, so mission accomplished!

The 1890s ball was held at the Dane Estate, an absolutely lovely mansion just outside Boston. We had fun posing for pictures in its elegant rooms, but with all the crazy going on I completely forgot my camera. As a result, these were all taken on my phone. Apologies, but enjoy! 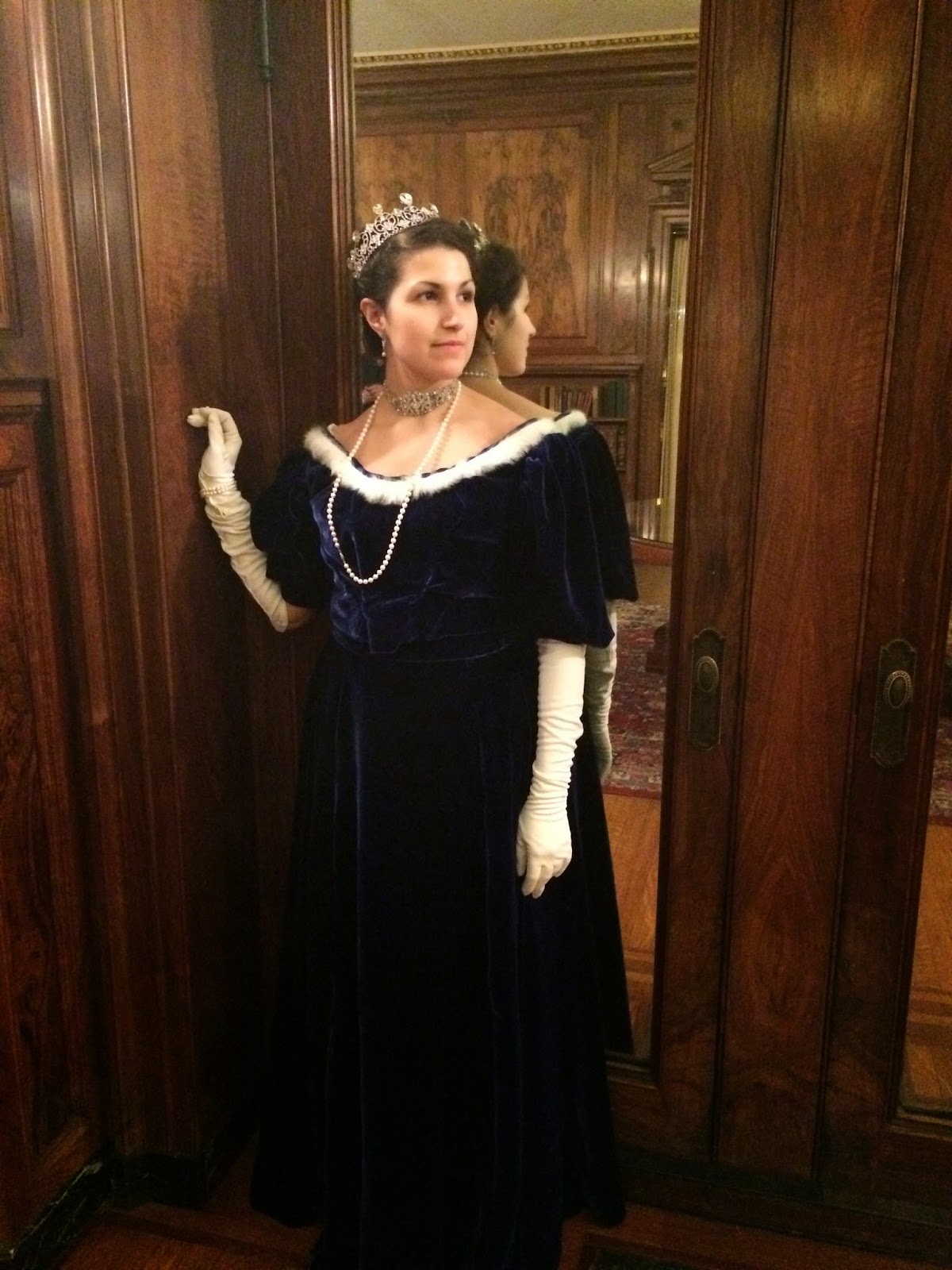 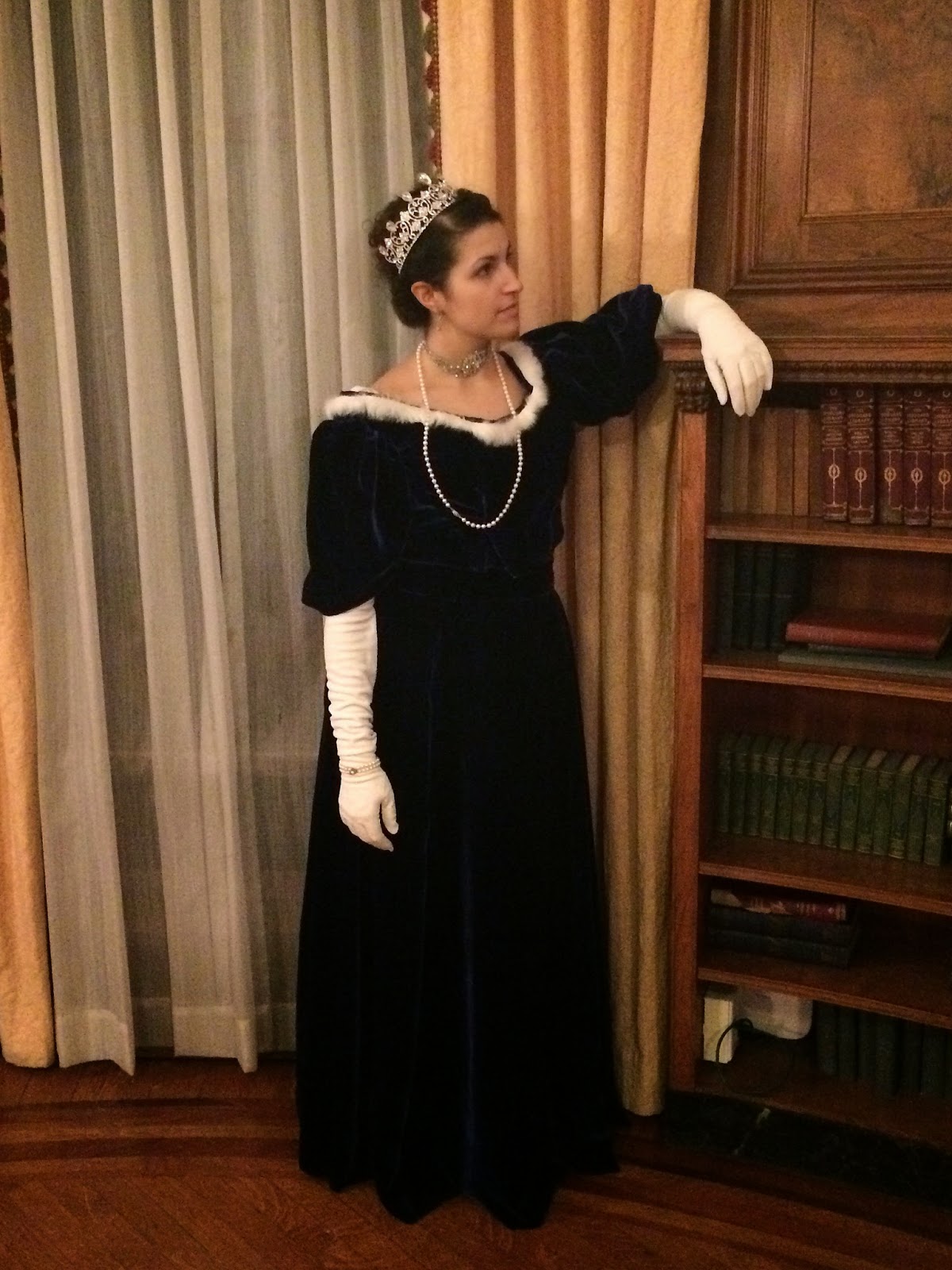 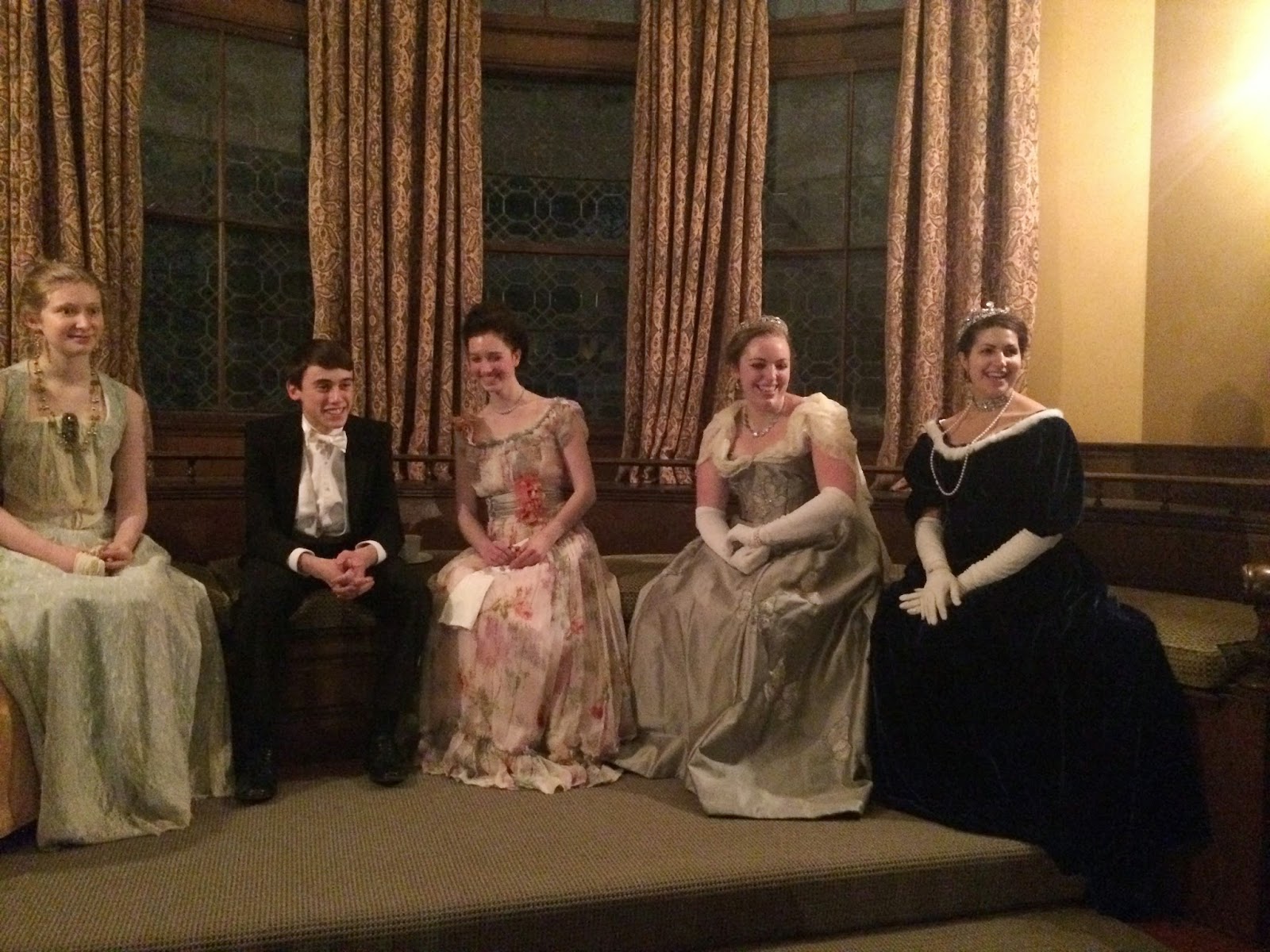 As people post pictures of the ballroom I'll do another post!
Posted by L. R. Stern at 8:00 AM 2 comments:

I'm still recovering from my weekend at Arisia, our local scifi/fantasy convention. I changed costumes 4 times on Saturday!

In the meantime, the fine folks over at Nerdcaliber covered the event and I wanted to share their images of me. Take a look!

Check out FirstPerson Shooter's gallery over at Nerdcaliber (linked in the captions) for more images from the convention!
Posted by L. R. Stern at 6:18 PM 1 comment:

In an effort to share the research I did in 2013-2014 and never posted about, some of the posts in the next couple of months will be a little out of order. I hope you enjoy them anyways!

At the America's Hometown Thanksgiving event, we keep warm and engaged by singing suffrage songs. These gave us a great way to engage visitors, share some of the messages from the American women's suffrage movement, and give our rally some spirit. Here's a short video of us singing from the event this year, courtesy of my awesome friend (and fellow suffragist):

Music is often a popular way to disseminate a group's message, so it's no surprise that there were many, many songs written for the suffrage movement (there were also many, many "anti" song written). In fact, the American women's suffrage movement has roots in several other reform movements from the 19th century--the most famous being abolition--which was also known for its music related to the cause. The songs we sang were all to traditional tunes, many of them written during the mid-19th century and related to the civil war.

Music was an integral part of suffrage rallies, marches, and gatherings. It was common for events that required a crowd (like speeches) to start with a song; the music would gather the crowd, share the suffrage message, and get listeners warmed up for the following oratory. The publication of music also provided a print avenue to share suffrage ideas with the masses--people who would never read a suffragist publication (like The Suffragist, 1913-1920) might see, or even browse, a suffrage song. The cover illustrations, which often featured the "new woman" as an empowered, wise figure with calls to goddesses in mythology, or holding babies and doing household tasks as their normal lives continued, offered a chance to demonstrate a future with enfranchised women: strong, contributing members of society who were still wives and mothers (not a threat to the very fabric of society, as anti-suffragists argued). Inside, the lyrics provided reasons for women's suffrage, aimed at both women and men--some songs focused on why women should want and have the vote, while others called men to pass suffrage bills (because women, of course, could not vote to do so!).

For example, "Marching Together"* is sung from the man's perspective, and entreats:

While a verse in "Song for Equal Suffrage,"** sung from the woman's perspective, explains:

Not for self but larger service has our cry for freedom grown,
There is crime, disease and warfare in a world of men alone,
In the name of love we're rising now to serve and save our own,
As Peace comes marching on!

and the chorus of "Another Star,"** which is more of a gender-neutral campaign song:

A ballot for the Lady!
For the Home and for the Baby!
Come, vote ye for the Lady,
The Baby, the Home!

There are some pretty straightforward themes that begin to emerge in these lyrics. Songs from the man's perspective often boil down to "do the right thing," but also point out that denying women the right to vote is denying a basic human right to women in their families (their sisters, mothers, and daughters). Alternatively, many of the songs from the women's perspective focus on the importance of women as moral centers (an argument used during the abolition movement as well), as caretakers, and as equal partners in the home. These lyrics leverage traditional views of women as the "gentler sex" to say that the country needs women's votes to keep peace and improve conditions. They also draw attention to the expectation for women to run the home--if women can handle the complicated socio-economic considerations for managing a household, why aren't they equally enfranchised?
One of my favorite songs that addresses the equal partnership argument is "The New Way"*:

Now the girls, in crimps and curls,
Take up the cue she gave,
And tell their lovers, one and all,
They will not play the slave
To any man whose selfish plan
Makes them but satellites,
For no such things as wedding-rings
Shall rob them of their rights.

Something to note about all of these arguments is that not a single one is pushing to really change the status quo: they aren't arguing women should give up motherhood, or abandon marriage, or join the workforce en mass. They're simply asking to be recognized for the work they are already doing (both in and out of the domestic sphere) and given the right to vote.

Of course, there were many many other arguments during the hundred years or so of the women's suffrage movement in America. But in particular, the messages set to music were able to reach people who would otherwise never hear them--men and women who would never attend a rally, read a pamphlet or journal, who might otherwise have missed the voices of suffragists altogether. The power of music for the suffrage movement was that it allowed suffragists to reach these audiences, and ultimately, their efforts succeeded.


The lyrics featured here are from the following collections:
*The Suffrage Song Book, 1909
**Suffrage Songs and Verses, 1911

For more on suffrage music:
"(M)othering: Strategies of Musical Activism in the American Women’s Suffrage Movement, 1900-1920"

Lessons and Experiments: 2014 in Review

I did my first retrospective post last year, and found that it was an incredibly helpful way to look at how much I'd accomplished (and also how poorly I often manage my time). This year, I wanted to do something similar. As I started to dig through my posts, I realized I had some firsts this year! A new time period (WWII), some new photography techniques (my petzval lens), and a new series of ongoing research posts (my image in context series). There was a ton of research, thousands of photos, and a heap of adventures. That said, there wasn't quite as much sewing! I'm going to take that as a sign that I tried to achieve my new year's resolution not to undertake projects at the very last minute...or at least, not quite as often.

So without further ado, a brief review of 2014!

It turns out 2014 had more than I expected, and I was lucky enough to attend some really wonderful events. As I went through my previous blog posts to put together this retrospective, I noticed a couple of things: for every last-minute project I made this year (or revisited from last year), I ended up doing alterations after the first wearing to fix the mistakes I'd made while rushing through the project, and while I did a lot of research (primarily on female photographers), I never posted it. So even though I made fewer things, I'm happy with my resolution to sew slower. Hopefully I can keep it up in the new year! (And get those research posts up!)

I also have a couple of other resolutions to add to the list: I'd like to make some of the projects I have fabric for, that have been sitting in my stash for years at this point. I'd also like to work on doing some photo shoots outside of events I'm already attending--take an afternoon, get dressed up, and just take photos. It's not normally what I do with my clothes (I mostly sew specifically for events), but I think it would be hugely helpful to practice actually taking pictures.

That second resolution I could use some help with: if you're in the Boston area and you're up for a picture-taking afternoon (historical or otherwise), let me know!