Depth of Field: Lens Technology in the Mid-19th Century

Wet-collodion processing led to faster shooting and much more reproducible images, but another important component of the evolution of photography was the camera itself. Modern photographers have a huge range of lenses to choose from, with a diverse assortment of capabilities. There is a deliberate choice about which lens to use for a particular shot to get a particular image; the reflection of those choices are in some ways a reflection of the photographer--what they wanted to show, their aesthetic preferences, their point of view. In the 19th century, lenses weren't interchangeable in the same way, and photographic techniques developed in different ways as lens technology changed.

Although photographic processes existed fairly early in the 19th century, the first convertible lens was not produced until about 1840. This lens, commissions via a design contest by the French society for the advancement of the industry (Société d'Encouragements pour l'Industrie Nationale), was designed by Charles Chevalier and called the "l'Objectif double à verres combinés." The lens was comprised of two curved glass disks inside a metal barrel, and by changing part of the barrel (and therefore swapping out one of the glass disks), the photographer could alter the focal length to change between a lens best for wide shots (landscape) and singular focus (portrait).


While the lens was revolutionary, its landscape configuration was by far stronger; the portrait length suffered from an overall lack of sharpness, leaving room for improvement.

Although submitted too late for consideration in the Societe's contest, another lens designed at the same time provided a much clearer portrait image. Designed by Joseph Petzval, a mathematics professor at the University of Vienna, the Petzval lens used complex mathematical equations applied to the spacing and curvature of the glass disks within the barrel to produce the fasts reflection of a flat field possible. The lens was quite sharp in the central focal point of the image and provided a much better resolution than Chevalier's lens.

The fault of the large curvature of the glass was that Petzval's lens had a narrow area of focus, and the rest of the image featured blurring/vignetting. While that made it less ideal for landscapes, the lens was well liked for portraits (its intended purpose), and the general features of the design quickly became popular, resulting in many many copies. Thousands of these lenses were produced and sold, which helps to explain why the lens's distinct image features are so prevalent in 19th century photographs. The narrow depth of field and small focal area also change the process of setting up a shot--rather than thinking about a scene or composition of multiple components, photographers were isolating one moment or face or object of particular interest and loosing all the surrounding context. While a different type of deliberate image creation than choosing the lens, I think it is very much a window into how photographers captured to world.


In previous posts in this series, I've discussed how images contribute to our understanding of the past, and the way evolving image-processing technology allowed photographers to leave the studio and bring the world home. If this was interesting, check them out!

Industry and Exploration: Travel and War in the Mid-19th Century

This winter I started posting about photography and how it relates to understanding/portraying history, because this is a topic I find particularly interesting. My first post was an introduction to 19th century photographic processes and the ways in which they were used. Today I'm continuing that theme, but we're adding some new inventions to the mix!

At the same time the daguerreotype was probably the most popular form of photographic development, a different process was also making its way onto the scene. Invented by Frederick Scott Archer, the "wet-collodion" process in the late 1840s. Known as wet-plate photography, the wet-collodion process produced a clear, noiseless image with a much shorter required exposure time than any of the currently popular processes. Wet-plate images could also be copied an infinite number of times from a single negative. This made producing images for publication a possibility, and the shorter exposure time made wet-collodion the best option for candids and outdoor shots.

The downside of the wet-collodion process was that it required the image to be developed almost immediately (i.e., while the exposure plate was still wet), or the integrity of the image would be greatly compromised. As a result, in order to shoot wet-plate photographs, photographers needed to travel with a portable dark room.


Still, wet-plate photography helped to start the "golden age of travel photography" [1] in the second half of the 19th century. These images gave everyday people, who could not afford to travel across the globe, a window into distant corners of the world.


Faster, reproducible images were also perfect for another purpose: capturing the realities of war. Roger Fenton, who traveled to Russia in the 1850s, used wet-collodion processing and a specially-designed mobile darkroom to photograph the Crimean War. His images are a mix of fascinating and exotic uniforms, the generic chores of camp life, and the grim, stark realities of battle casualties. For the first time, people at home in England saw glimpses of battle, in shockingly realistic candid photographs from the field.

These images of battles and peoples in distant places were certainly new and stark and fascinating, but they had a sort of space guaranteed by the utter otherness of their subjects. In contrast, the photographs taken during the American Civil War were both honest in their portrayal of battle, but also brutal in their closeness.

Before the war, Mathew Brady had a photography studio in New York, and in the late 1850s was working with his partner Alexander Gardner to specialize in life-size portraits using enlargement techniques that were a cutting edge area of wet-plate photography. "Brady saw himself as a pictorial historian," and so when war broke out on home soil, Brady undertook to document it.

Brady took--and exhibited at his gallery--graphic images of the war's front lines. As the war grew, so did Brady's coverage: at times he had up to 20 photographers in the field. The production of clear images, taken quickly with "the never-failing tube," that were reproducible for dissemination among the American public was a direct result of Brady's use of the wet-collodion process.

This past weekend, The Commonwealth Vintage Dancers held a World War I ball to commemorate the centennial of the start of the first world war. It was a truly lovely evening, with wonderful people who were enthusiastic dancers (the floor was never empty!), rousing music, and yummy refreshments. The ball also provided a great opportunity to make some changes to the dress I made for a 1914 performance earlier this spring. 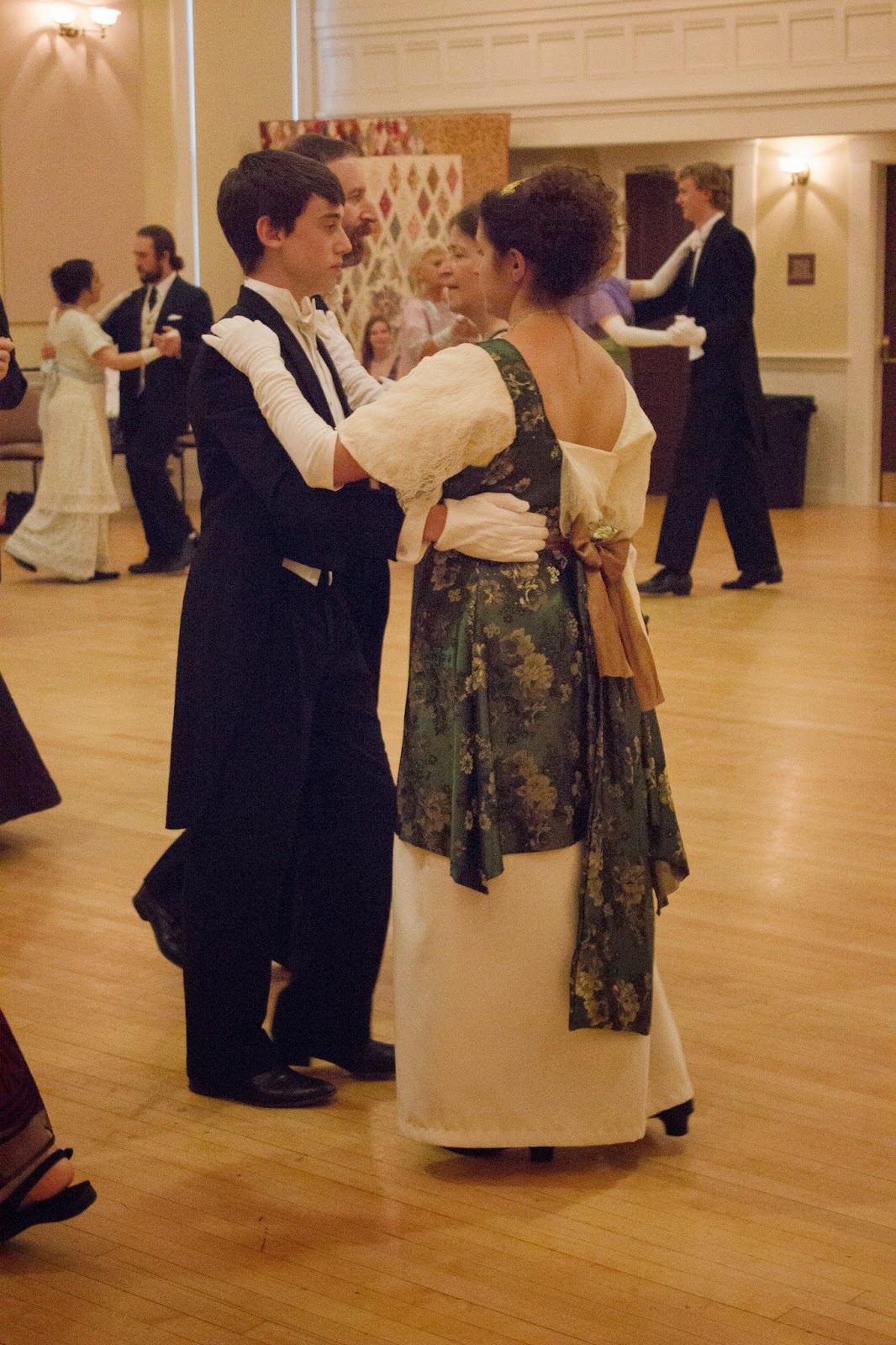 When I first threw the dress together, I ended up getting some bits wrong--namely, the brocade draping on the bust and the waist seam. I meant for the whole side bodice to be covered in green, but ended up cutting too far over and exposing a lot of the white, and then stitching the waist too high so that the dress ended up being quite the contortionist act to get on and off. This is what happens when you sew at 4am, I suppose...

But the lucky thing about draping is that I didn't actually cut the bodice piece as I was sewing it down--I just folded the extra corner underneath. Which meant that once I ripped out all the stitches, there was enough of the piece to extend around the bodice to where I'd originally wanted the draping to go. I also re-did the opening on the waist so that it no longer requires dislocating both shoulders to change. There are still some little changes I want to make (like tacking on the bronze waistband), but for the most part this is now done in a way I'm happy with. Hooray! 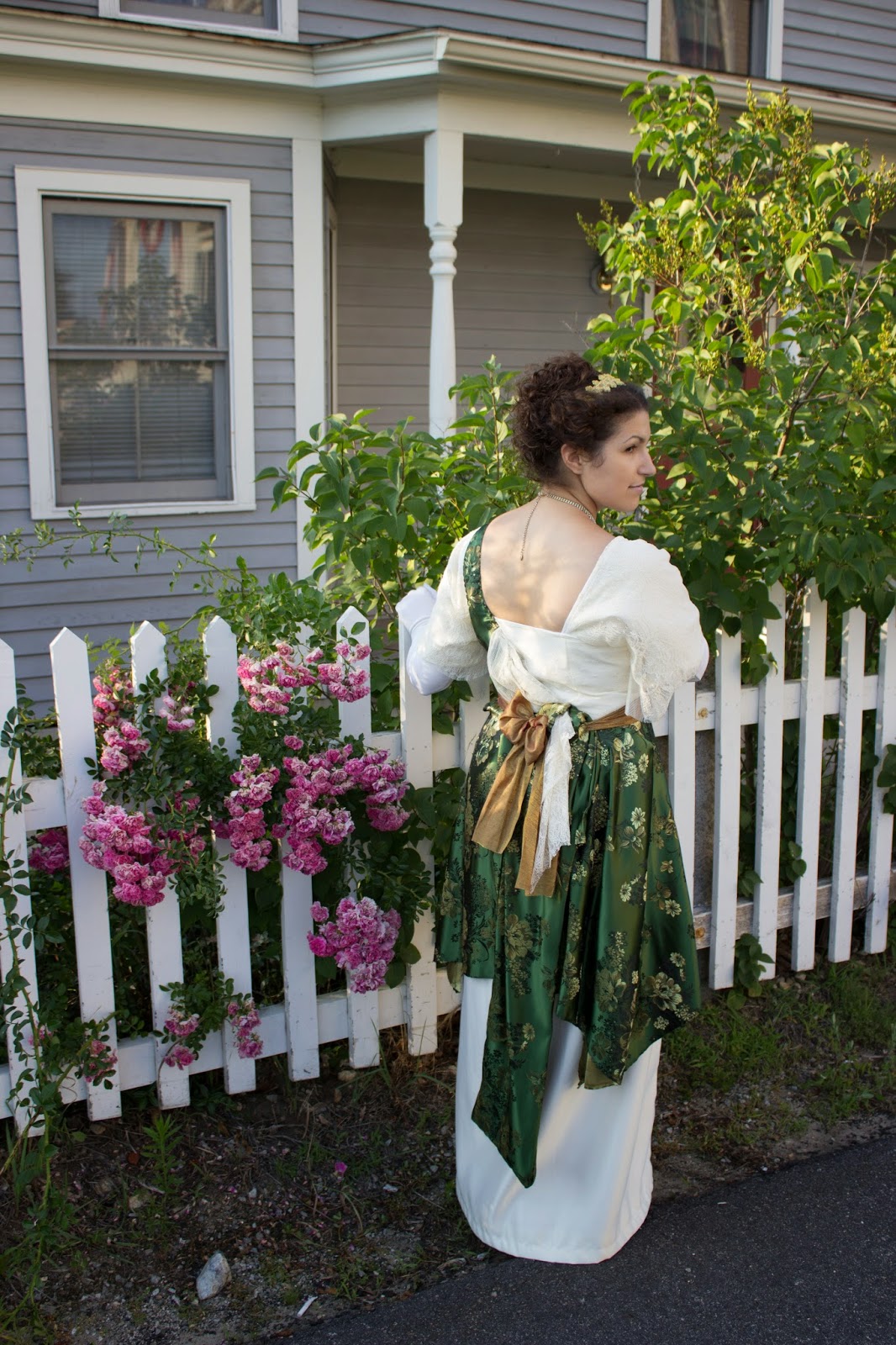 I wanted to try something new with my hair, so I drew inspiration from some of the 1914 cone-shaped styles.

I achieved the look mainly with my own hair, but I padded out the crown with a couple of rats to give it a more distinct cone shape. The decoration was some gold lace from the stash.

It was such a lovely evening that I didn't take many pictures because I was too busy dancing...but here are a few! 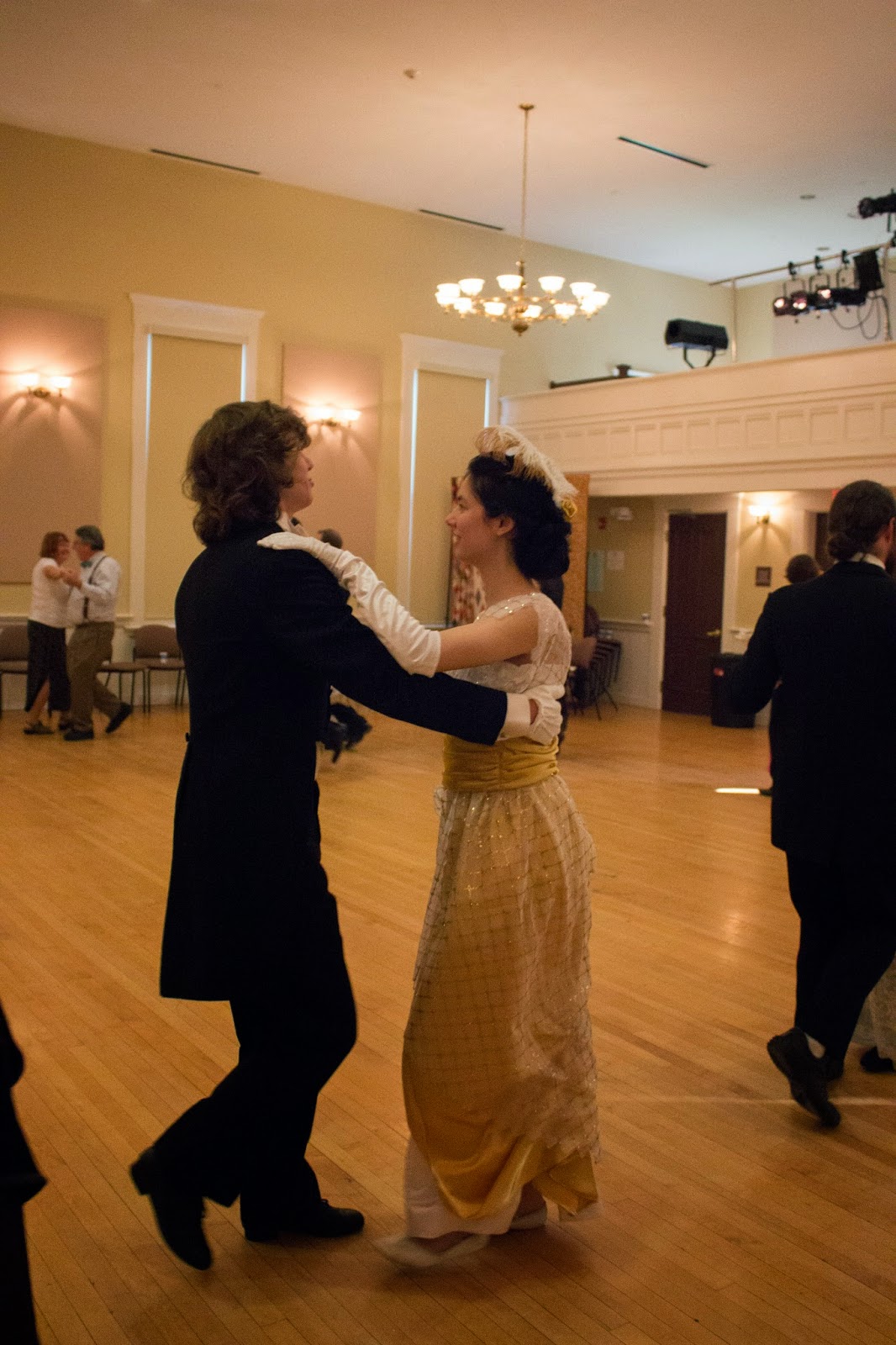 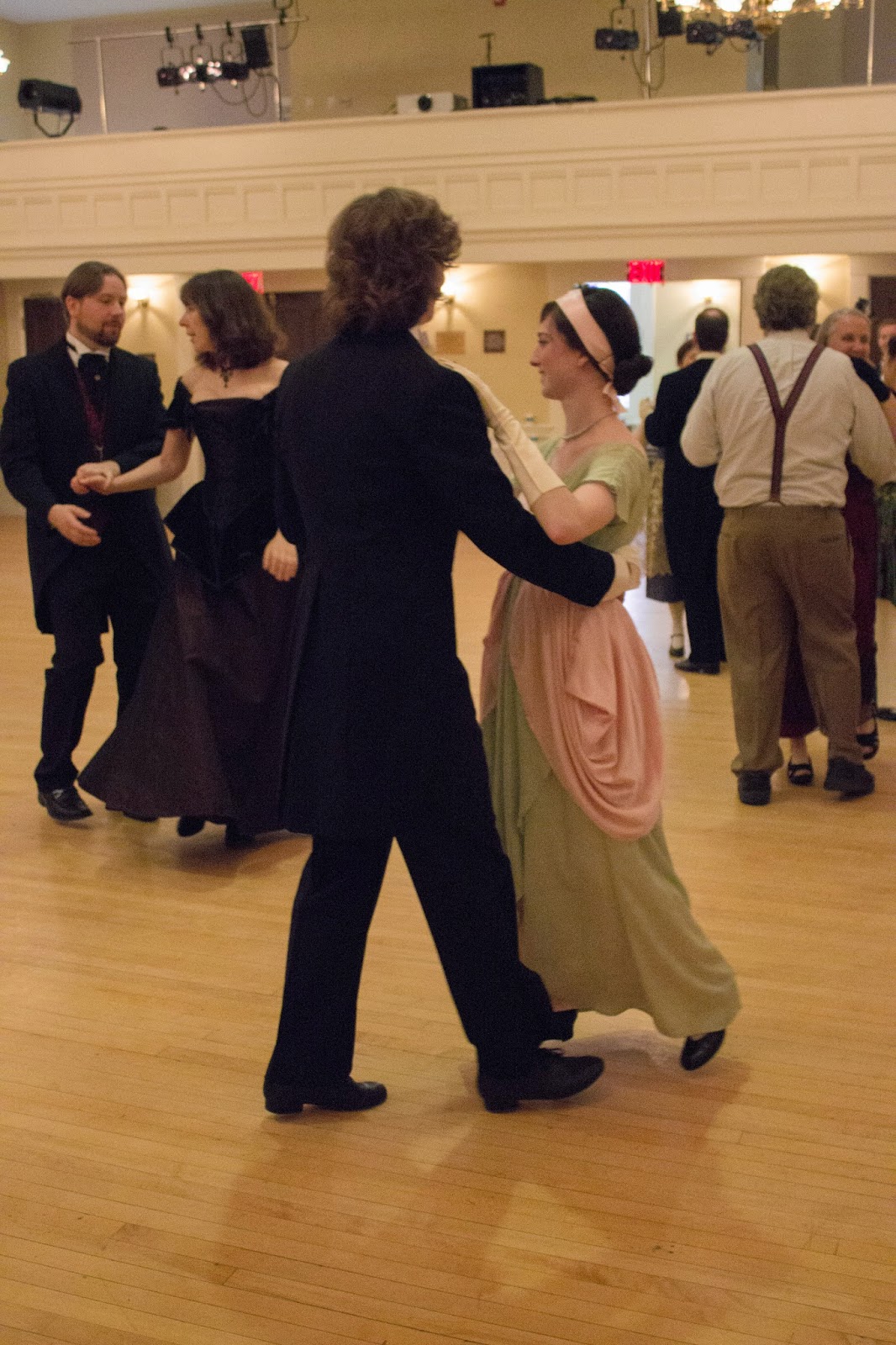 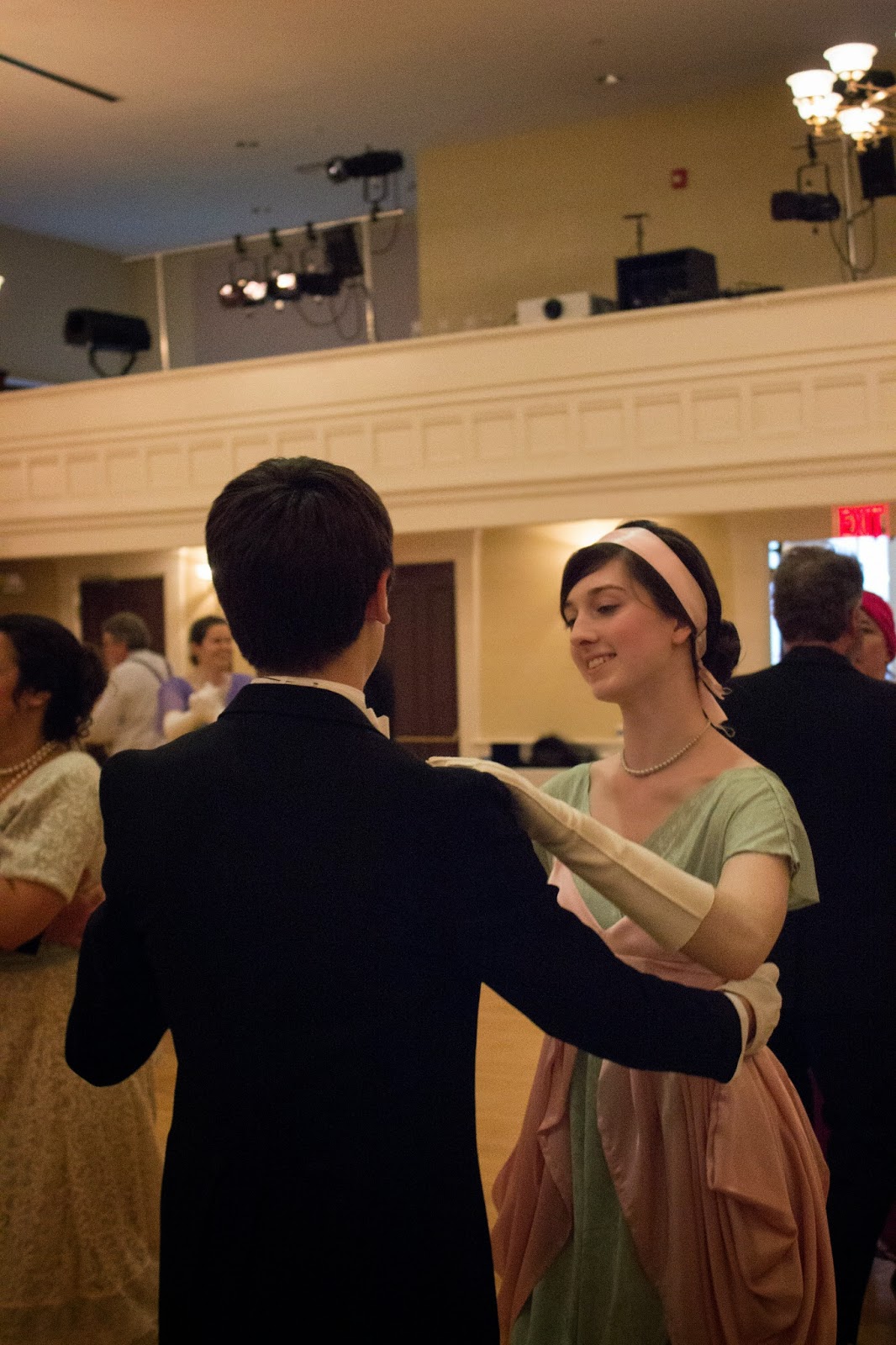 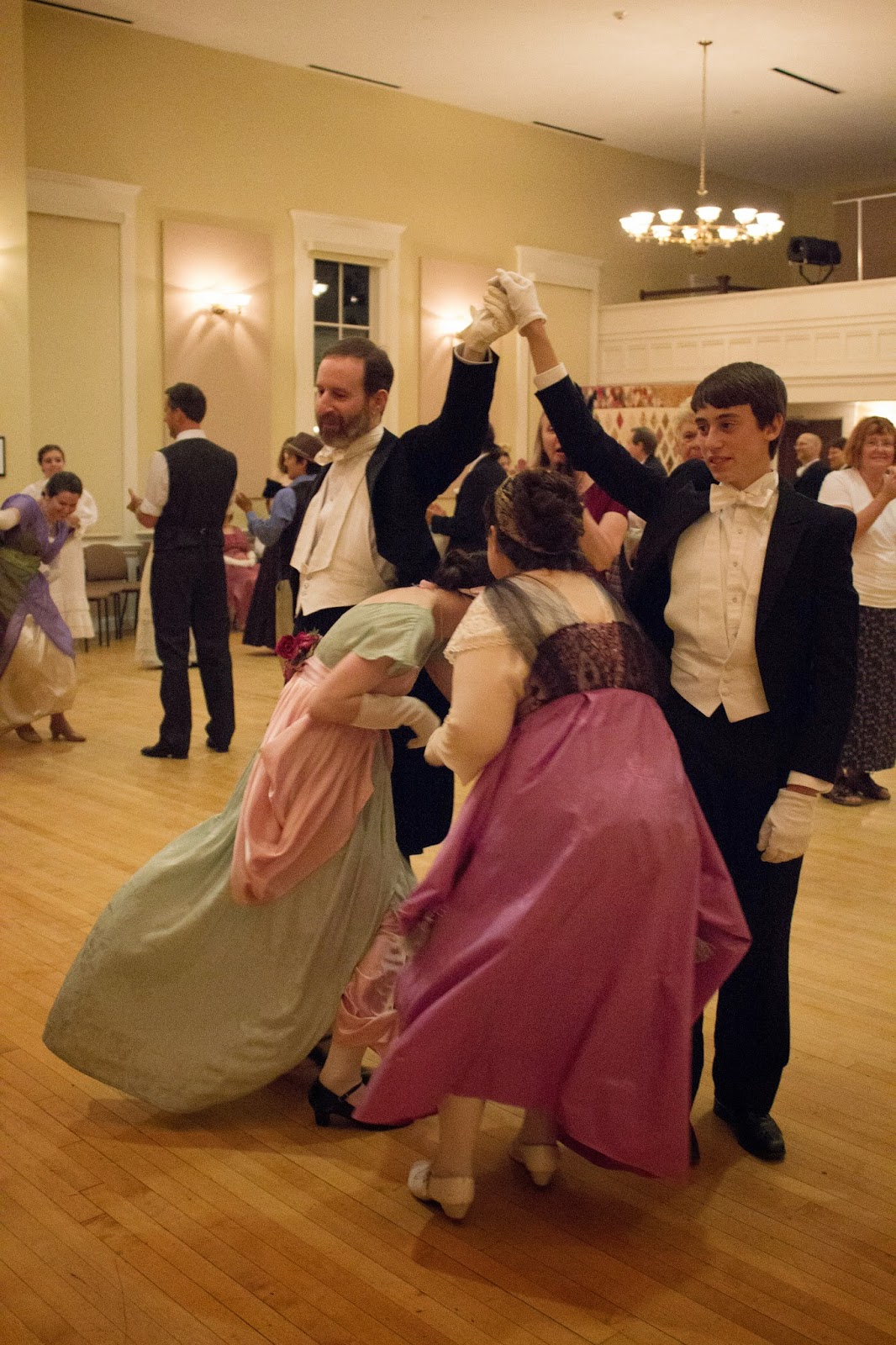 I don't talk about the modern(ish) clothes I wear day to day, because that's not really what this blog is for. But recently my family took our first trip together in several years to visit my grandparents in Florida. As part of the adventure, we also went on a 4-day cruise. Well, it happens that nautical-themed clothing is a summer staple of mine, and possibly my favorite part of my modern summer wardrobe. (I would say my overall modern wardrobe, but my batman and other superhero items might take the sailor suits on.)

When my mom told me what the plan was, I told her I would have a sailor outfit for every day on the boat. 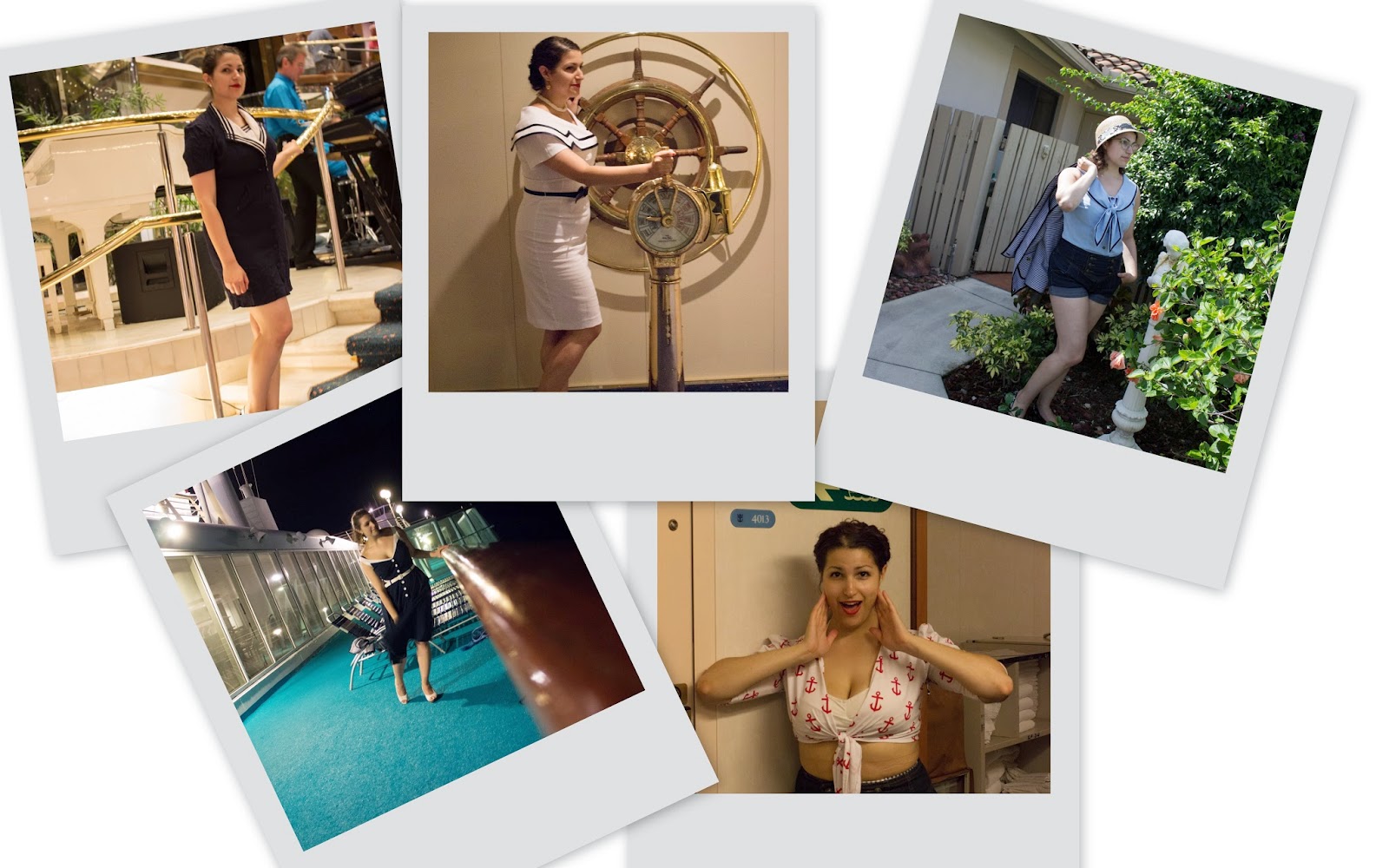 I'm pretty sure this challenge provided some entertainment to my family, who were super helpful and took pictures of all of my outfits. Unfortunately, the weather wasn't great (I don't think I recommend taking a cruise during a tropical storm-turning-hurricane), so these are mostly interior shots. But my self-imposed nautical challenge was too silly and fun not to share!


I hope you enjoyed this snapshot into my slightly silly modern closet. If you have questions about the origin of any of these pieces, feel free to ask!
Posted by L. R. Stern at 5:00 AM 2 comments:

A New Cotton Bodice for Summer

Ok, confession time: I lied. I said I didn't have enough time to make a new ballgown bodice for my cotton 1860s dress, and that I wasn't going to do it. 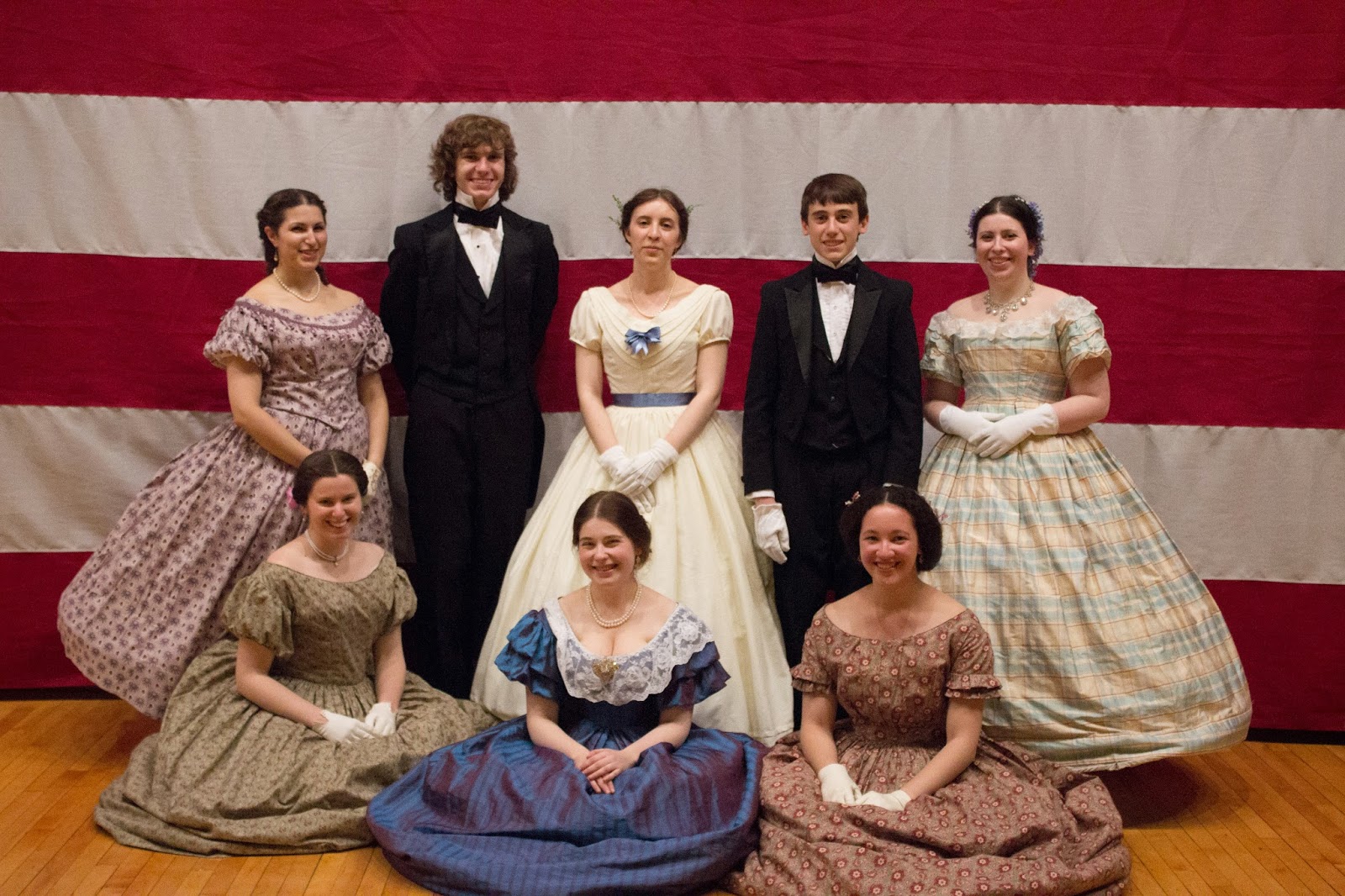 ...but then I did. The truth is, when I was writing my post about day and evening bodices I started to feel kind of sad about not having the bodice or being able to wear my cotton dress (it also happened to be really hot, and the thought of sweating into my silk was unappealing). So I put down my laptop and dragged out the fabric!

The bodice isn't perfect--it was made in a hurry, after all--but in general I'm pretty happy with it. I was especially happy to have something cool to wear to dance in! Hooray! As a bonus, I found some purple tassel trim in my stash when I dug out the leftover fabric from last summer. So I even had trim!

We'll be wearing the day bodice version of these dresses again at George's Island again in a few weeks. If you're in the Boston area, please come and say hello! You may even be asked to jump in on some of the dancing.

Sometimes taking serious, pretty pictures is difficult. It takes a lot of arranging...