The Speed Graphic by Graphlex and my DSLR Mod

I knew I wanted to live up to my role of war correspondent for the WWII Weekend in Reading, but I also didn't want to carry around a modern camera all weekend. My compromise was to use period camera, but modify it to house my modern camera.

I settled on the Speed Graphic, a large-format camera manufactured by Graphlex in Rochester, NY. The Speed Graphic was originally designed specifically for press photographers in the early 20th century, and were produced into the 1970s. The Anniversary Speed Graphic was released during the 1940s, and was the most popular press camera model used during WWII (although there were several others in use). Given its iconic nature, it was a perfect camera for me to carry at the event.

The Speed Graphics were large format cameras; in particular the anniversary model (which from now on is what I mean when I say "speed graphic") was a 4x5 format. This means that the images were a larger size and the film was individual sheets (rather than a roll), which requires a lot of between-shots work, but gives a ton of control.

As a camera for shooting action, the Speed Graphic had pretty good range: 24 shutter speeds up to 1/1000. (1/1000 is a fast shutter speed, and the faster the speed the less blurry objects in motion will look.) And while being a mostly-metal camera, it's not unmanageable in terms of weight (although it's still heavy!).  In fact, I shot in about that range with my modern camera at the event.

The main body of the Speed Graphic is mostly bellows, with a metal track to roll the bellows in our out. The lens sits in the lens card (about a 4 inch square) at the front of the bellows, and there is an attachment at the top of the camera to see your shot. On one side of the outer body is a handle (super useful!), and the other has a flash mount. This model of Speed Graphic came with one of two backs: either a "Graphlex" or "Graphic"; mine has a "Graphic" back, which has a spring-loaded film area.

I shoot with a Canon "Rebel" T3i DSLR (commonly referred to as "the baby"), which is the camera I wanted to use for the Reading WWII weekend. In order to disguise it as an Anniversary Speed Graphic, I had some configuring to do.

I mentioned that the Speed Graphic is mostly bellow--this means that while the body looks roomy, it's actually filled with the bellows support framework and 4 metal bars for the back of the film area at the very back. So rather than being able to just slide my DSLR right on into the Speed Graphic body, I had to fit it to the back with the lens sticking through the bellows, and half the body hanging out the back. This meant I couldn't reattach the back flat to the camera body.

[Disclaimer: almost everything I did to my Speed Graphic is reversible, but not everything. That's why I made sure to start with a no longer working camera.]

In order to hold the camera in place (without damaging anything), I used velcro strips wound through the interior bars of the Speed Graphic. That way I could remove my DSLR whenever I wanted/needed to, but it would be secure and held firmly in place while inside. To protect the body of my Canon, I layered cotton quilt batting inside the Speed Graphic (which is the fuzzy white stuff in the pictures).

Of course, this meant that I still had most of my DLSR body hanging out the back of Speed Graphic, and the whole thing looked pretty ugly.
To fill this gap, I decided to build an extension to the Speed Graphic body. In the end, this made the setup about 5 inches longer than the original camera...but from far away (or even fairly close) it wasn't super noticeable, and I decided that was good enough. I built the extension out of foam board (think science fair presentations) and hot glue, with two openings in the top and bottom to weave the velcro straps through. This meant that everything was attached together, and pretty solid without damaging the DSLR. I also left a small gap in the frame to thread the cord for my remote shutter (which is how I actually took pictures).

I covered the frame in textured black scrapbooking paper before sponging it with mod poge glossy sealer. This allowed me to mimic the texture of the actual Speed Graphic body so the two looked slightly more cohesive. I attached the original back to this frame extension, and voila! I sneaky Speed Graphic "home" for my DSLR!
The one majorly inaccurate piece was that I actually shot by looking through the opened camera back, rather than through the actual Speed Graphic viewfinder. It was the best compromise I could come up with...oh well.
Putting the monster together was a little tricky, because while I strapped everything into place I needed to periodically check what was visible through the DSLR so that I could make sure the lens wasn't obstructed. (Actually, I didn't figure the process out until the second day of the event, which is why I most of my pictures from the first day didn't quite come out.) The extension also had a tendency to slide around while I was out and about, allowing the batting to poke through. Still, it was a key part of my impression for the weekend, and I had a blast shooting with it! While I want to make some adjustments, this is definitely a prop that will be coming out again.

Something to Do (for the war effort): World War II Weekend at the Mid-Atlantic Air Museum

Last month I officially took on another period (because I needed another one), and attended my first WWII event! Of course, I already like the 1940s and have attended '40s events before, but this was my first time attending a reenactment/living history event for the period. In fact, I haven't been to anything in that vein in years, and I wasn't sure what to expect. It turns out, I had a blast! Women were heavily involved in a lot of different positions during WWII, and that is a part of history I find fascinating--plus, it meant there was a lot for me to do!


In particular, I took pictures.

The event was hosted by the Mid-Atlantic Air Museum, and the annual event offers camp displays, skirmishes, air demonstrations, veteran talks, swing dancing, shopping, and several other attractions. There was a lot to see! I was quite impressed with the displays different groups had set up, and particularly awed by the "French village" several of the groups have constructed on the site. Each contributing group has a different building, with the bottom floor open to the public (displays ranged from a cafe, dress shop, and hotel to signal corps equipment). The village is also where the skirmishes between the Allied and German troops took place, which was way more interesting than open fields and a lot of marching (like what I remember from Gettysburg).

We camped with the Big Red One Living History Organization, since they were kind enough to let us join and put us up in a tent. (People were incredibly friendly and welcoming all weekend, and I can't really express what a difference that made to my experience at the event.) BROLHO doesn't have a building, but they did have a neat medical setup and an array of vehicles, which were awesome. I suddenly feel motivated to learn to drive a manual shift so that I can be a motor pool girl... 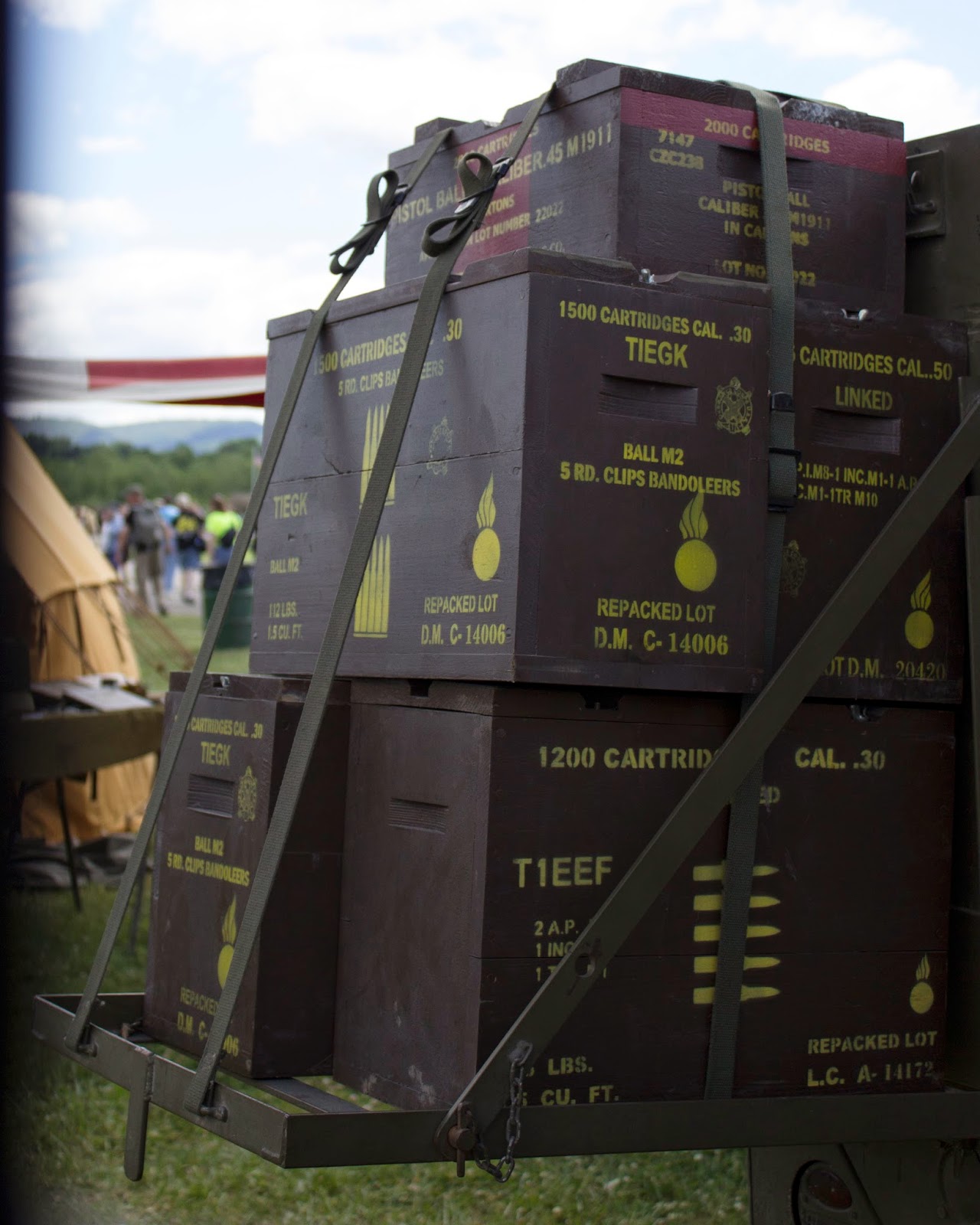 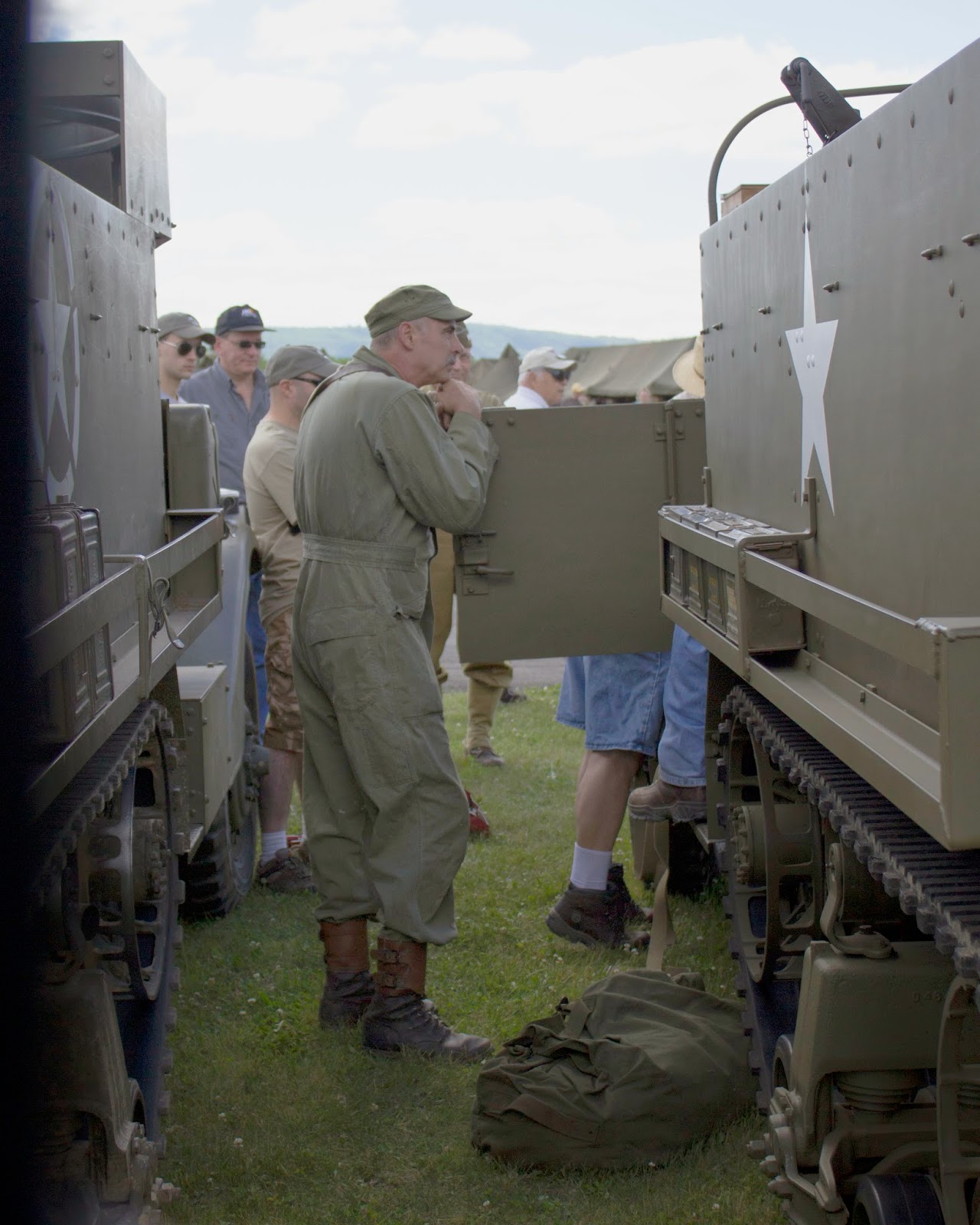 While I did a lot of reading about the Women's Army Corps (the WAC), I decided to portray a civilian at the event--a photographer, to be exact. There were several American female war correspondents working overseas during WWII, and they were all incredibly smart, resourceful, driven, and fearless. Expect more on that soon! War correspondents were technically civilians, but they worked very closely with the armed forces to report the war from theater (although women weren't allowed at the front lines), and depending on their capacity wore uniforms. So as a war correspondent I had a WAC uniform with a few differences: patches to signify my WarCo status, a beret (not a standard hat for WACs, but worn by some of the war correspondents I researched), and no WAC insignia.

Most importantly, I had something to do! I modified an original (but no longer operational) Speed Graphic camera--a common model for press at the time--to hold my modern digital SLR, so that I could actually spend the weekend shooting the event, but still have it be something in period. I had so much fun capturing the event, and I am really happy about the way several of the pictures turned out.

So without further ado, here is my photographic report from the European Theater...and the view from inside the reenactment. I am just as interested in trying to capture the weird we're-a-museum-display phenomenon as I am in capturing the event itself. 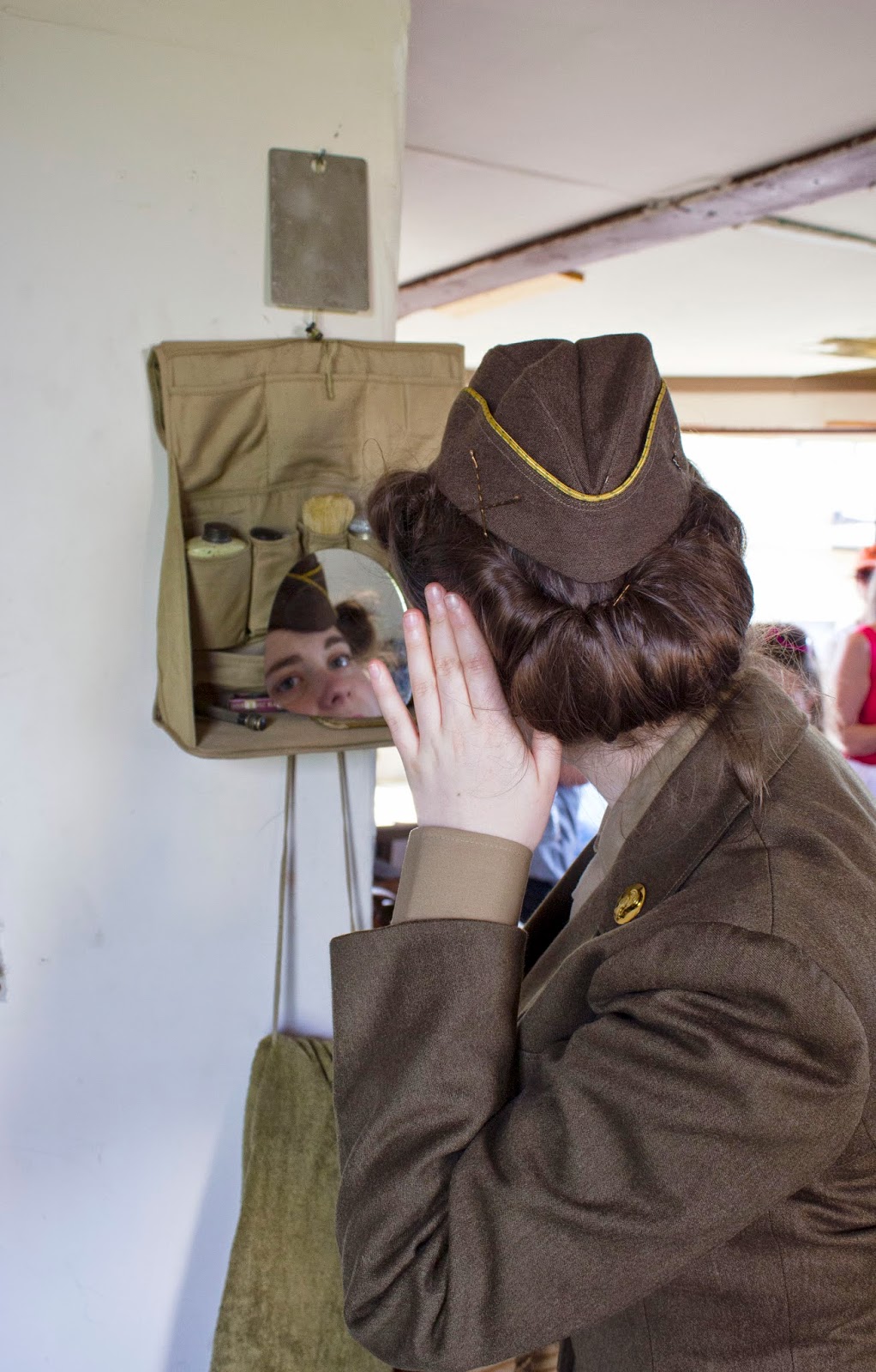 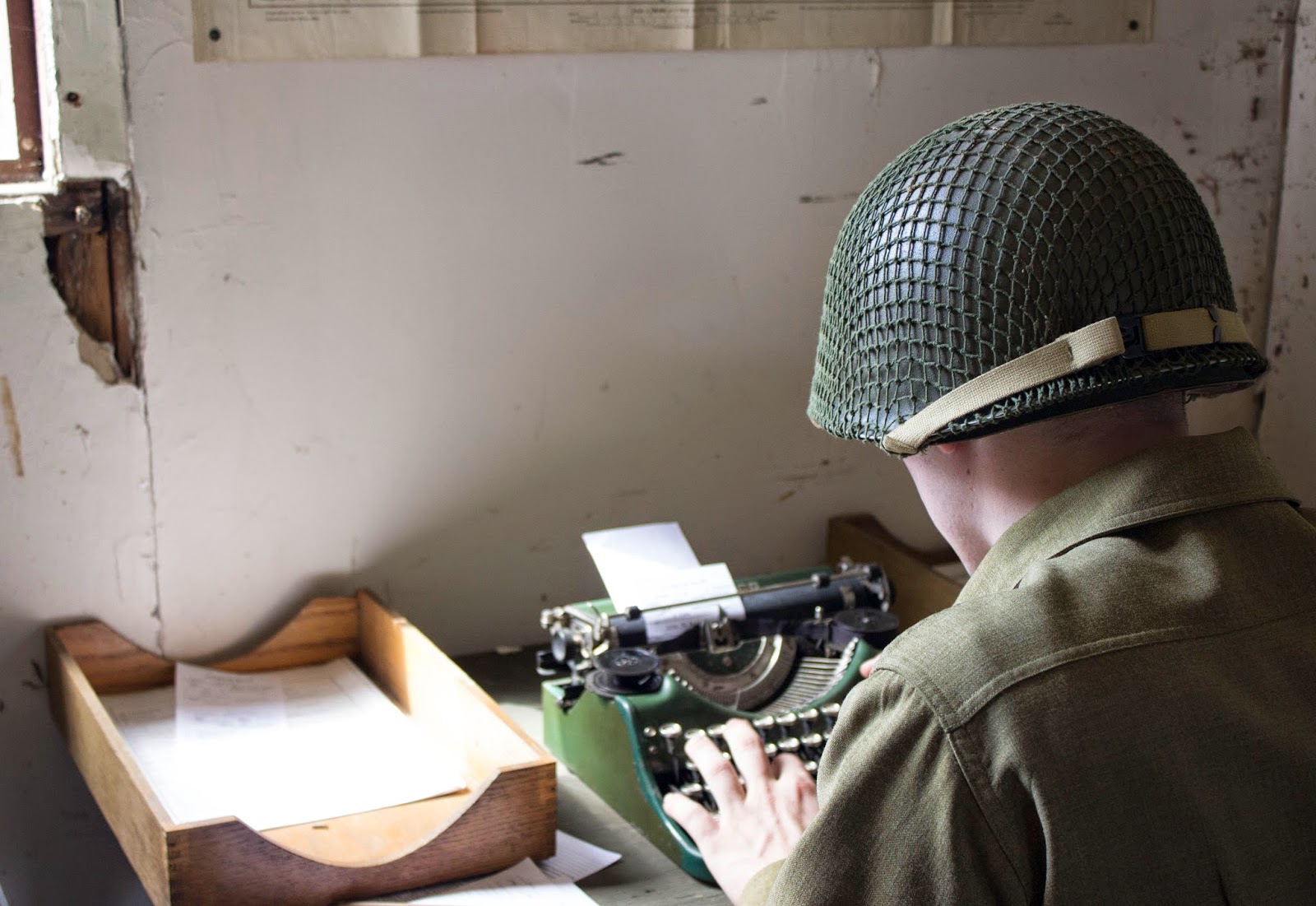 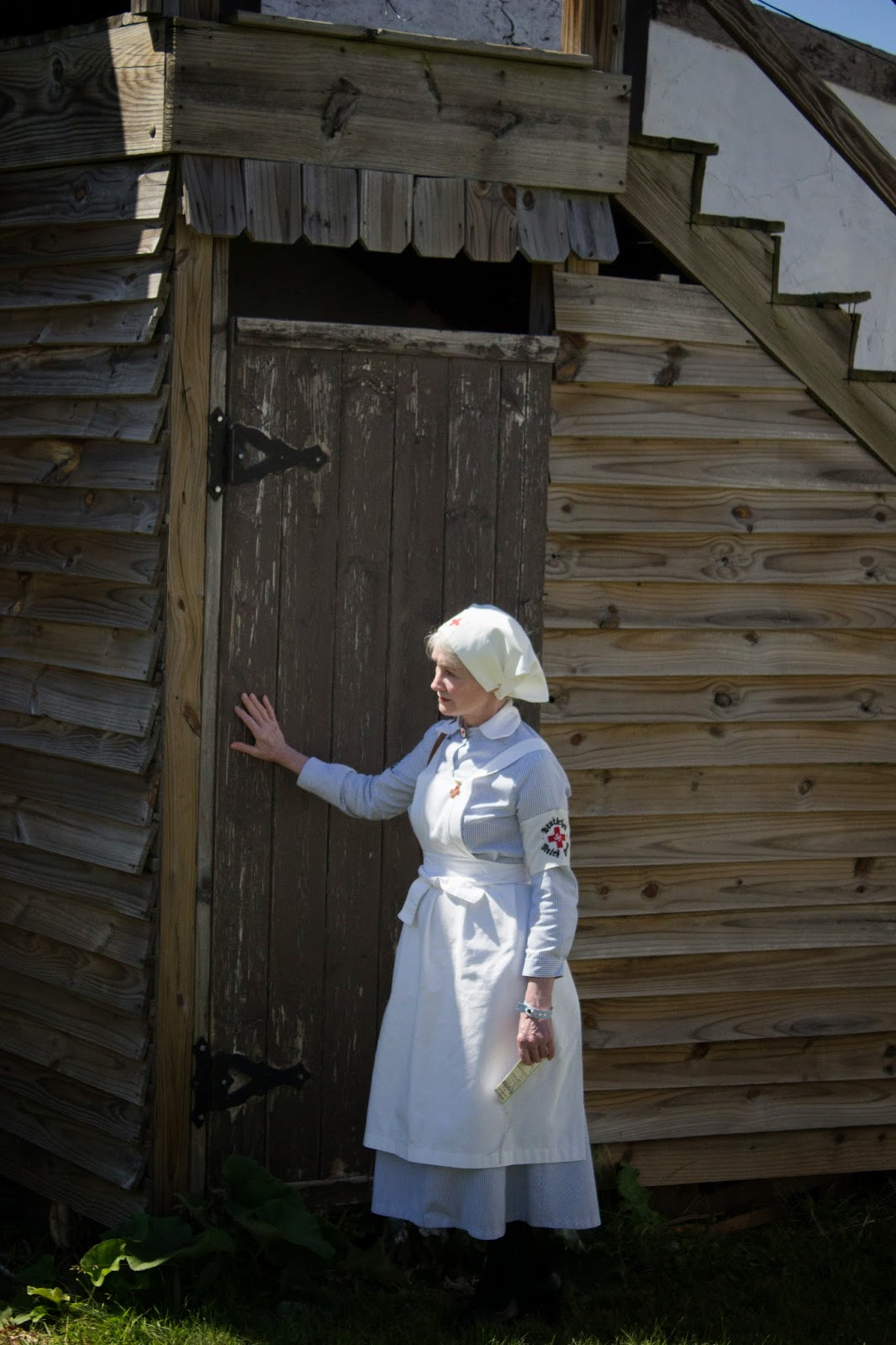 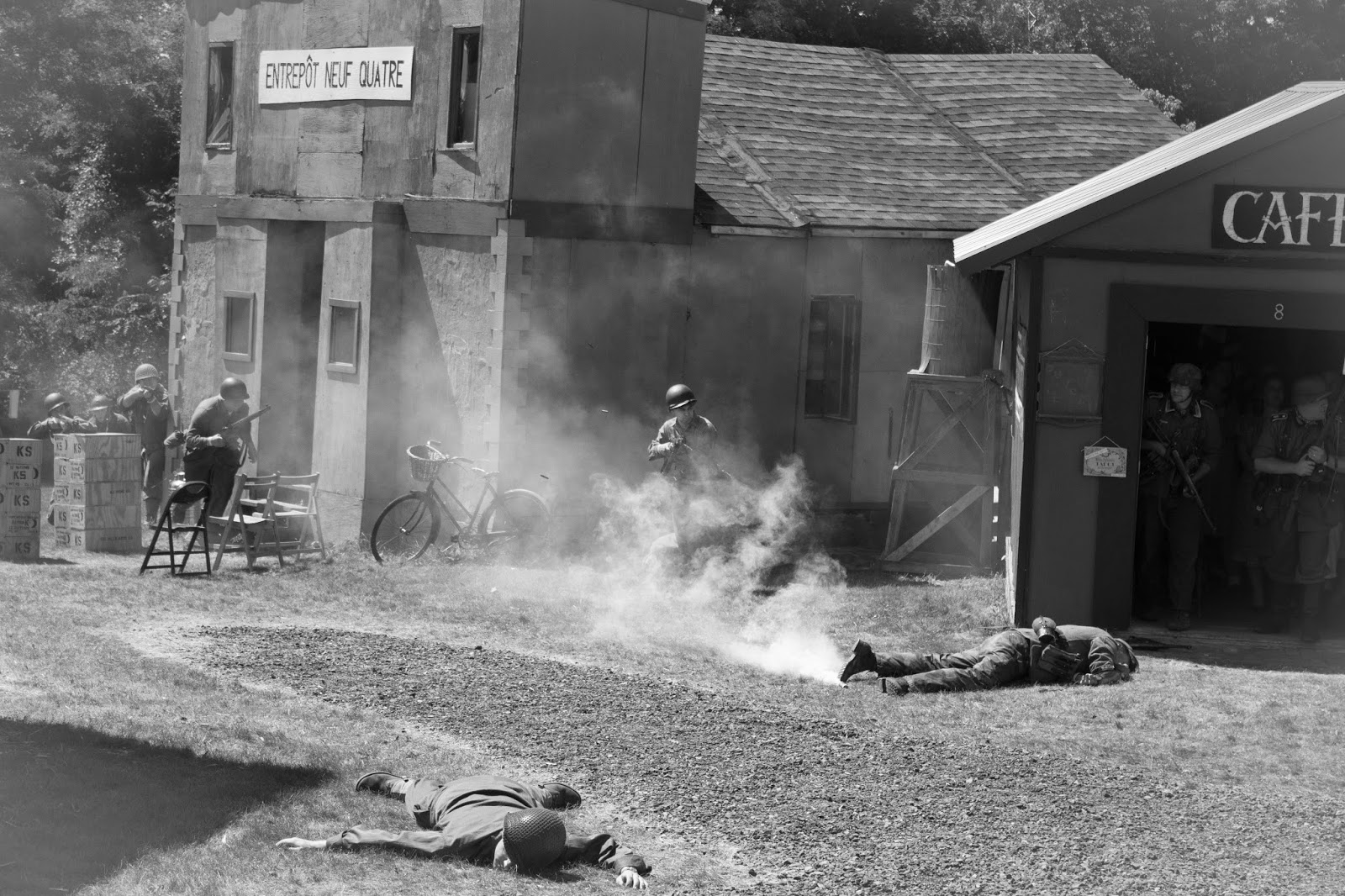 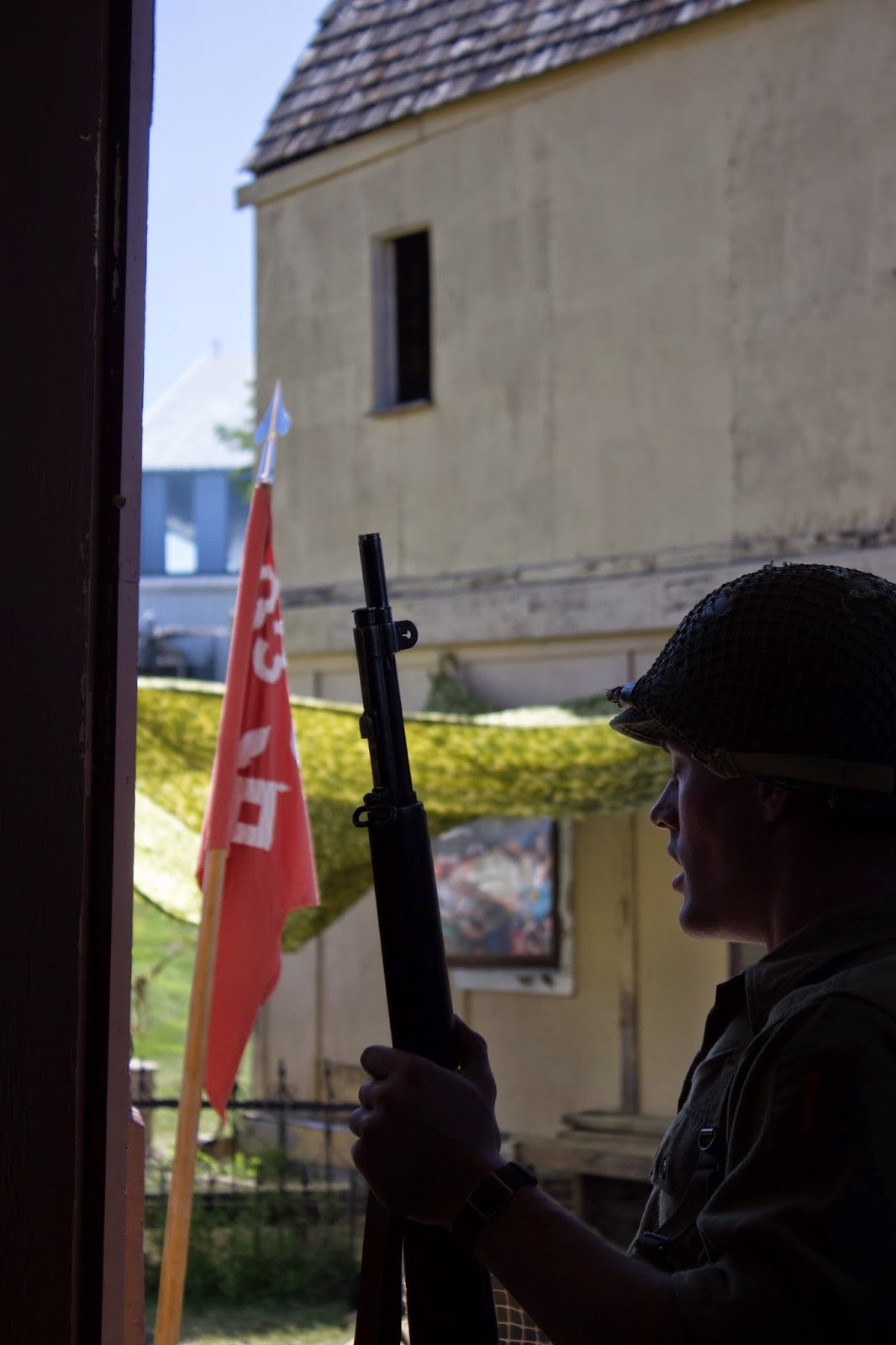 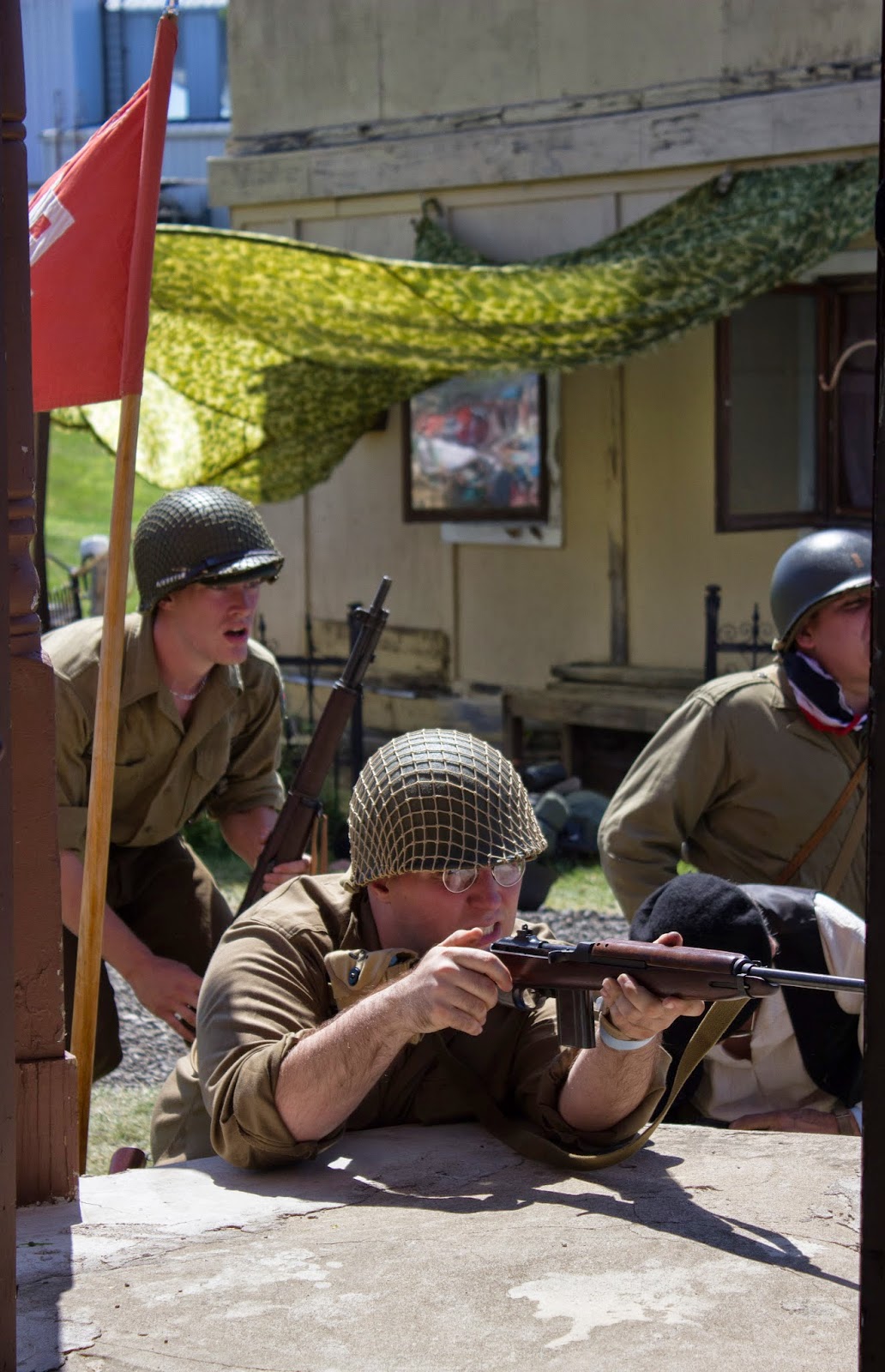 All in all, a really great weekend! I'm excited to go to another event in the future. Definitely worth the 12ish hours of driving in 3 days.
Posted by L. R. Stern at 10:19 PM 2 comments:

I had grand plans to make a bodice for the 1860s ball this weekend, but unfortunately I don't think it's going to be ready. Even so, I thought I'd share some of the inspiration behind the project.

The plan was (is, someday...) to use the extra yard or so of reproduction cotton print from my 1860s cotton day dress to make an evening bodice for the skirt. This seems to have been a pretty common occurrence in the mid-19th century, and it makes a lot of sense. A dress takes a lot of material and a lot of effort, but a little evening bodice is a small fraction of that--once you're already making something, why not put in a tiny amount more and end up with something that can be worn to double the occasions?

I think this is a really neat system, and I think the different trims for day and evening are also a cool contrast. Here are some outfits I particularly like!

There's a lot of variety here--silk, taffeta, cotton, velvet--at a range of costs. Even Mary Todd Lincoln had dresses with both day and evening bodices, and she was known for outrageous spending in the Whitehouse. Convertible dresses are an easy way to get the best use out of your wardrobe, and to extend the range of items. Plus, it's about as mid-19th century as you can get!
Posted by L. R. Stern at 8:38 PM No comments: