"The Glare and Glitter is Brutal": Chemical Dyes and Plaids of the Mid-19th Century

It's been absolutely ages since I did a tartan post, and with fall approaching (not that it feels much like fall today!), I've been eyeing my closet full of mini-kilts. For the rest of my tartan in fashion series, click the link or use the tag cloud to explore!

Where we left off, Queen Victoria had fallen in love with the Scottish Highlands and created a fad for "clan tartans," trips to the Highlands, and tartan gowns...but there was another actor at play in the mid-nineteenth century that contributed to some of the more wild and crazy and fabulous patterns of the period: the rise of chemical dyes in fashion.

Now, a lot of these dresses weren't tartan--or even trying to be tartan--but the craze for tartan at mid-century is certainly cousin to the wild, rich colors available. While a lot of tartans have subdued or dark setts (especially in their hunting versions), there are also many many tartans that fit the bill for wild and crazy.

Talk about loud! They almost make dresses made entirely of Victoria's Royal Stuart (a quite popular choice at the time) seem downright subtle.

While variations on many colors could be produced prior to the 1850s, it wasn't until then that the particularly loud colors of chemical dyes became available and popular enough to inspire some truly screaming dresses.

In 1856, William Perkin (a student in the laboratories at the Royal College of Chemistry), began a project to investigate synthesizing quinine (used to treat malaria and a fairly new discovery). While his experiments failed, Perkin discovered that his not-quinine synthesized chemical turned fabric purple, and did not appear to wash out or fade in the sun. He sent the dye to well-respected colorists in Perth, Scotland, for evaluation.
Patented in 1857, Perkin's dye of aniline sulphate and potassium bichromate became one of the first popular chemical dyes, "for dyeing with a lilac or purple color stuffs of silk, cotton, wool, or other materials" (from the patent). The color became known as mauveine, or "Perkin's Mauve."


Perkin's Mauve was all the rage. Charles Dickens wrote in 1859, “As I look out of my window, the apotheosis of Perkin’s purple seems at hand – purple hands wave from open carriages – purple hands shake each other at street doors – purple hands threaten each other from opposite sides of the street; purple – striped gowns cram barouches, jam up cabs, throng steamers, fill railway stations : all flying countryward, like so many birds of purple paradise” (from All Year Round).


Around the same time, aniline was also used as a base for a new red dye, called fuchsine (1859). A blue dye from aniline was next in 1863, and with it came a major breakthrough. Made by heating chemicals and mixing them with the red aniline dye, chemical analysis of the aniline blue determined that a similar process (called "alkylation") could be used to create many other colors as well.

And with that, brighter, wilder colors were all the rage. Written in 1869, this description of England is perhaps my favorite. English fashion included ‘violet dresses of a really ferocious violet, purple or poppy red silks, grass-green dresses decorated with flowers, azure blue scarves and dresses of purple silk, very shiny so that they reflect the light dazzlingly...The glare and glitter is brutal.’ I want to be brutally glittery. New life goal.

The bright colors afforded by aniline dyes (as well as other chemical variations) opened up a world of fashionable possibilities.Perhaps most importantly, this type of chemical dyes was more colorfast than older methods, meaning it was much less likely to run or bleed--and could therefore be used in patterns.

The rise of chemical dyes made bright colors accessible to a large audience, and combined with the popularity of tartans to create a whole new breed of plaid. While tartans had been bright and colorful before aniline, now it was possible for the combinations to become trends. While muted colors did come back into fashion relatively soon, the penchant for bright plaids stuck around. Why wouldn't they? Those are some truly fabulous dresses.

For more about chemical dyes, check these out:

Morris, P., & Travis, A. "A History of the International Dyestuff Industry." American Dyestuff Reporter, 81(11), 1992.
Fukai, A. "The Colors of a Period as the Embodiment of Dreams." Fashion in Colors, Kyoto Costume Institute.
Forster, S. & Christie, R. "The significance of the introduction of synthetic dyes in the mid 19th century on the democratisation of western fashion." Journal of the International Colour Association, 11, 2013. pp.1-17.
Greenfield, A. A Perfect Red. New York: Harper Perennial, 2005.
Posted by L. R. Stern at 11:13 AM 5 comments:

After the two-outfits-in-a-week 1860s/1920s sewing marathon from a couple of weeks ago, I needed a change of pace. So I switched gears (and machine settings), and started working on a costume for Boston Comic Con, which was held last weekend at the Seaport.

The con was supposed to be in April, but due to the Boston Marathon bombings and the lockdown, it was rescheduled. Honestly, I think the re-scheduling might have turned out to be good, as the Seaport (not the original location) was a bigger space and I can't imagine what 15,000+ attendees would have felt like in the Hynes (the original location)--it was packed enough as it was!

There were some definite administrative issues (I ended up waiting in line for 2 hours on Saturday to pick up my wristband), but overall I had a good time and got to meet a bunch of other local comics fans, which was super fun. There were some great costumes, and great shopping!

Over the two days I got a chance to practice some photography skills (and being less awkward when asking people for photos, haha), which was great and while I didn't take a lot of pictures, I did get a few shots I was really happy with.

I was also pretty happy with the costume I made. Starling, also known as Ev Crawford, is one of the only characters created in DC's New 52 that I am excited about (even if they've benched her now...sigh.)--she's tough, smart, and has a 50s/rockabilly style that I love. 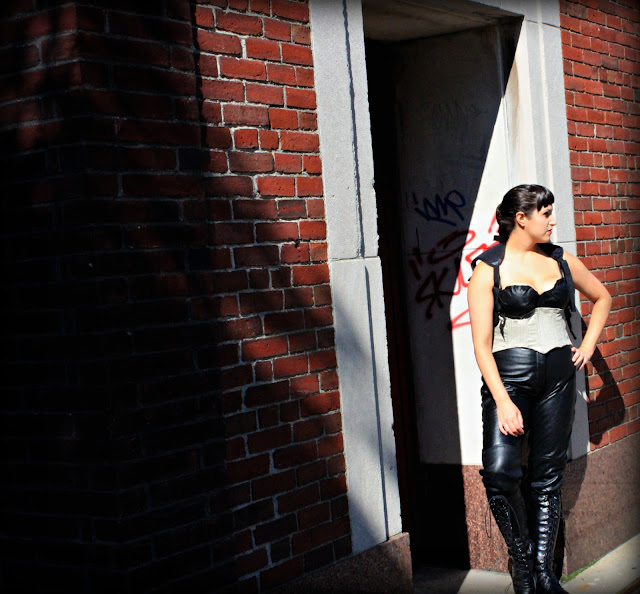 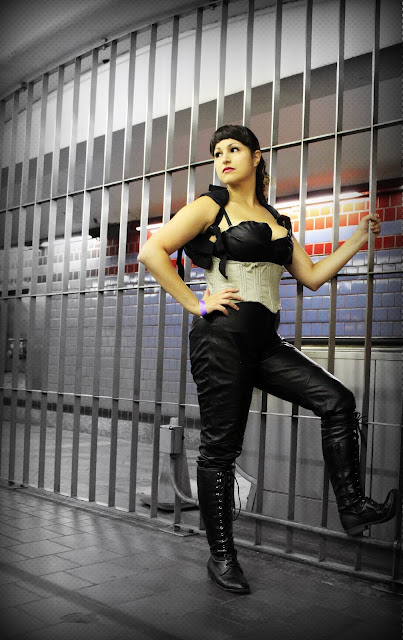 Once again, my historical costuming skills came in handy. The grey corduroy underbust corset is based on my 1860s corset (and still needs some adjustments, so I'll draft a new one for NYCC in October), and sewing the same way. The only changes are thinner bones, sewn in sets of three, and hook and eyes up the back instead of lacing (with no front busk). This turned out to be way more secure than I was expecting, probably due to the real, solid boning instead of the cheap plastic stuff that comes in modern Victoria's Secret-style pieces.

The black top is a cheap bra that I covered with goat hide leather, the leather pants and gun holster came from Ebay, and the boots were borrowed from my little sister (who came to BCC with me).

The bangs are also from Ebay, and worked out way better than I was expecting thanks to a good trim by my sister the night before.

I felt like a badass, which was the point, so...costume mission accomplished! I'm excited to make a few adjustments and wear this to New York Comic Con in October.

But enough about my Sunday outfit...on to the rest of the con! 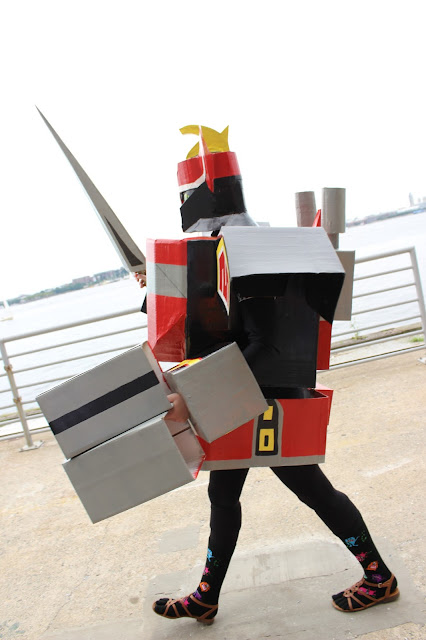 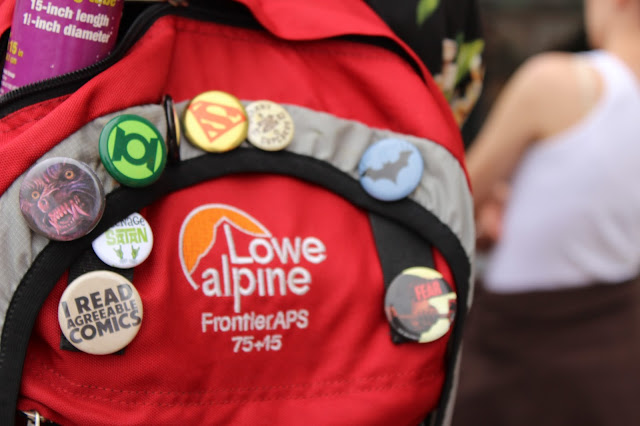 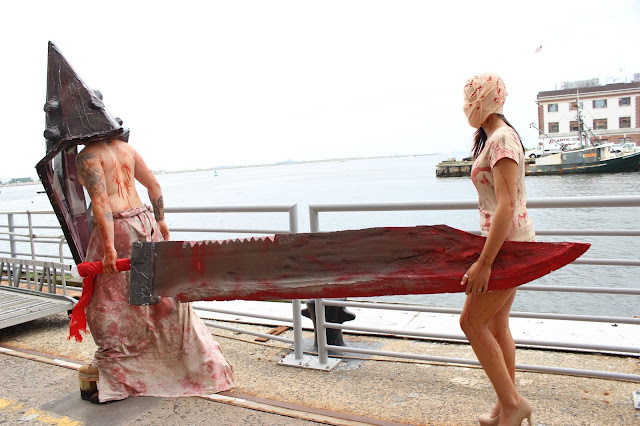 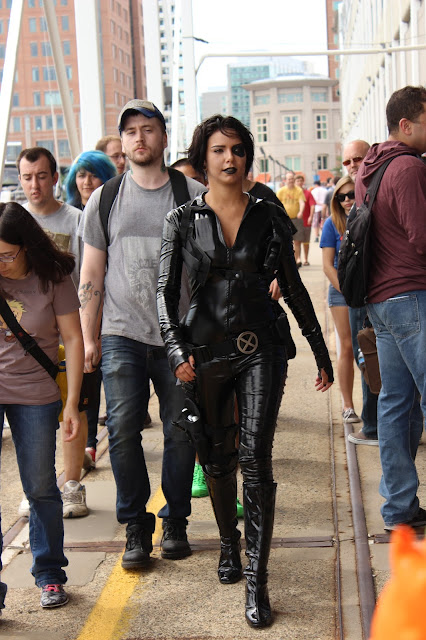 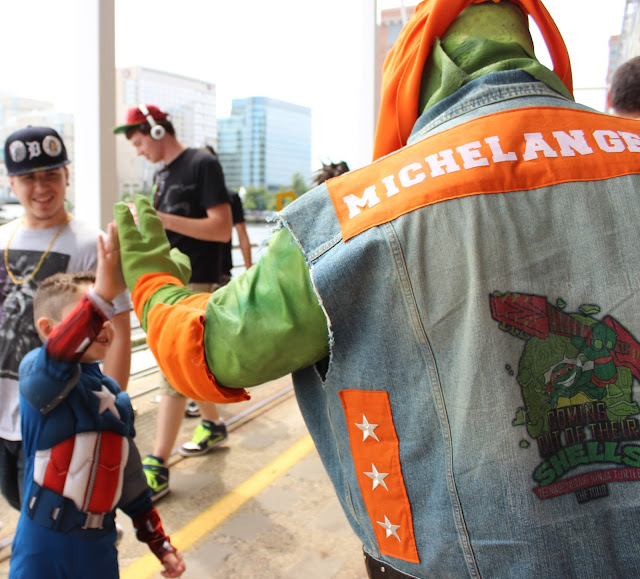 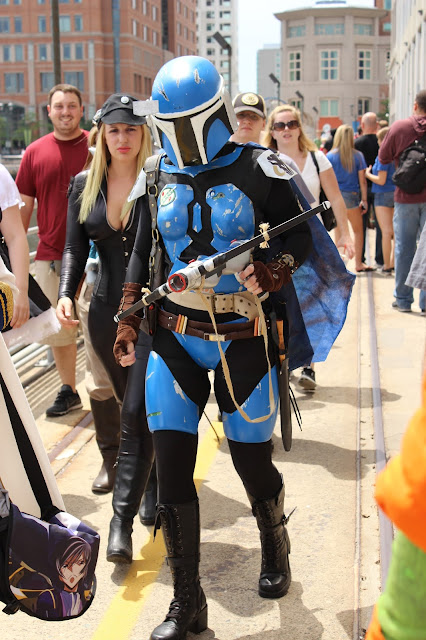 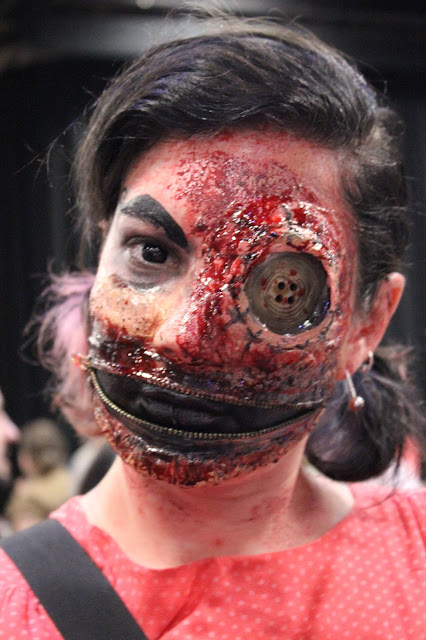 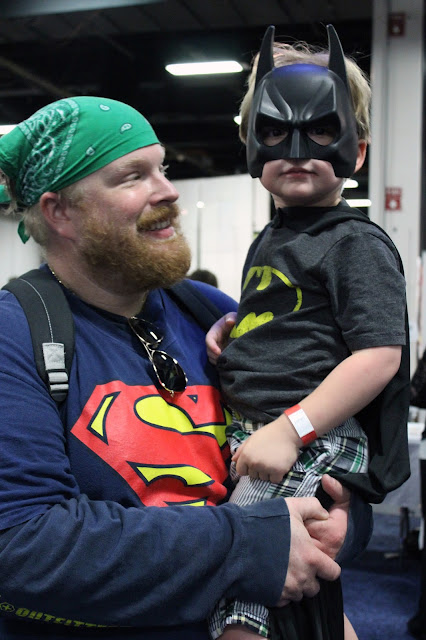 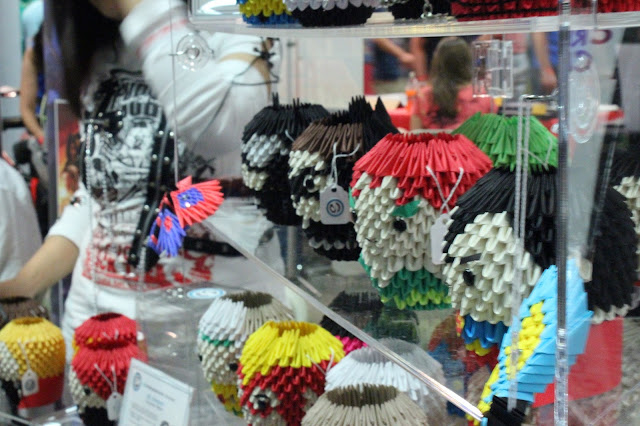 On the way, we also made a side trip to Antonia's lab to drop off some stuff, and i found the radiation safety guide... 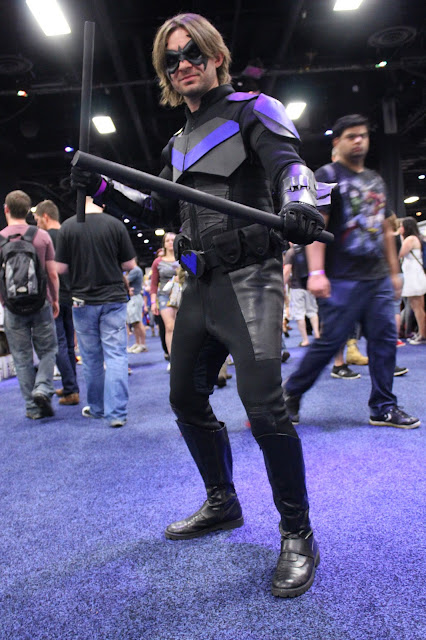 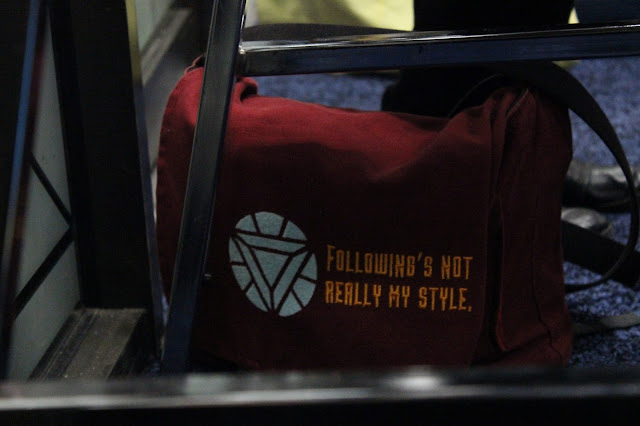 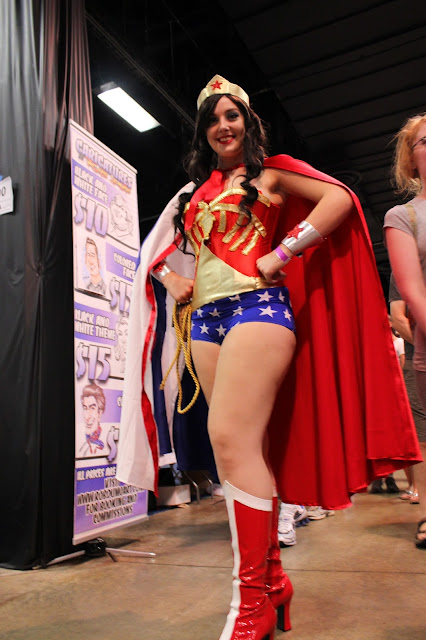 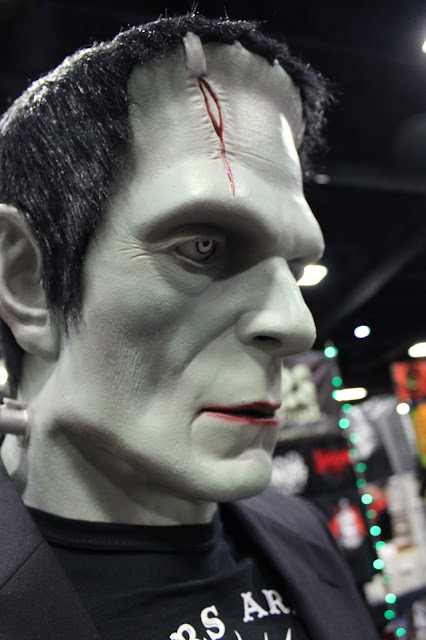 So, I realize I'm way behind on my posting...and there's a whole new post coming up this week! But in the meantime, I have a really good excuse.


This past Sunday, I became a Mudder.


Over the weekend I completed Tough Mudder New England, a 12 mile obstacle course race on Mount Snow, in VT. That means in addition to 18 obstacles (including getting electric shocks, jumping into a tub of ice, crawling under barbed wire, and surmounting a 1/4 pipe), the event wound through 12 miles of terrain up and down (we did at least 4 climbs) the mountain, which has an elevation of 3,586'.

It was hard. And awesome. I spend a lot of time being glamorous and elegant, but yesterday I was just a badass...and it felt great. Finishing the event, I felt like I could conquer the world, and it was a beautiful thing.

What the whole Tough Mudder came down to was my stubbornness, determination, and not looking before I lept...in other words, it was all about brain power (but I think all the training I've been doing probably helped too).

Normal, more glamorous posting will resume this week...but this was too kickass not to share. And really fun, actually--my parents came, and can vouch for the fact that I was grinning (almost) the whole time!

So really, I can have it all. Just because I look fabulous doesn't mean I can't also kick ass, and I love that.
Posted by L. R. Stern at 11:41 PM No comments: