This week (through July 4th) is Boston Harborfest, and this year is especially cool because the week coincides with the city's Navy Week and some of the War of 1812 bicentennial events.  Today my family and I headed to the Charlestown Navy Yard to tour some of the visiting tall ships as well as our own U.S.S.Constitution, nicknamed "Old Ironsides" since its time as a navy leader during the War of 1812.  Naturally, boats and history mean sailor dresses, so I trotted out a favorite that I made last summer.
I worked on my victory rolls as well, with limited success.  I'm still not totally happy with them (so I'll just have to keep practicing), but they looked pretty good when I left the house this morning.  Unfortunately, they weren't as wind-proof as I'd hoped, despite the copious amounts of hairspray, and the harbor winds wreaked havoc on my temporarily-straightened hair. Luckily, we'd already taken pictures!


I made the dress last summer as an experiment in pattern drafting, and it is one of my favorite things to wear because it is super comfortable and also nautical.  I think I need to invest some time making a few more sailor dresses this summer so I have some variety and this one can have a break! I have a couple of patterns in mind and am planning to raid the patriotic fabric bins on sale after July 4th.  I already have a parasol to play with-I made it to match this dress last summer.  It was an easy 1-day project and I highly recommend recovering parasols as a cute accessory for summer events...hats are nice, but sometimes I want a little extra sun coverage (and sometimes my hair doesn't fit inside a hat, like today).


I've had a lot of friends visiting this summer (and more to come), so I've spent more time than usual doing touristy things like the Freedom Trail.  The great thing about this is that I feel like I've been communing with the history of the area, and remembering why I love it so much.  I've also been learning some new things!  For example, did you know that it takes 8 days to sail a tall ship (a modern one that is, with engines) from Denmark to Boston?  Two of the visiting tall ships were from Denmark and Norway, and their crew members were full of information.

Also, did you know that the original figurehead on the Constitution was Hercules?  A later one was President Andrew Jackson, but he was so unpopular in Boston that the figurehead's head was sawed off in the night! You can see the Jackson head and a model of the Hercules figurehead at the Constitution Museum, which is totally darling and fully interactive.
One of the battles "Old Ironsides" lead was the defeat of the British ship the H.M.S. Guerriere during the War of 1812.  That bicentennial will be celebrated this August, and I will be present and dancing! I'm looking forward to it, and this weekend was a great way to motivate some more regency sewing. I learned a lot, and I look forward to exploring more of the summer's naval events! 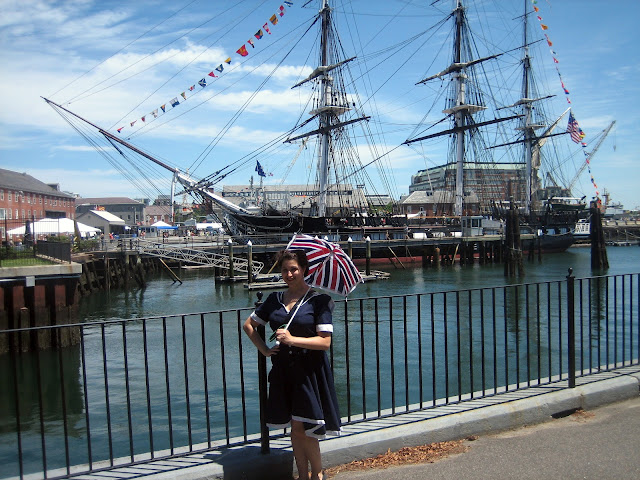 I've been neglecting you! For this I apologize...but I do have good reason.  I've had a busy month since graduation--I've recently gotten a job (and will therefore be living in MA for the next few years, hooray!), and begun the frantic Newport sewing binge before the dance week at the end of July, not to mention I've been hosting visiting dance friends, working, and adventuring!

Today I performed with the Commonwealth Vintage Dancers at the Salem Athenaeum before dashing off with a friend to finally see Brave, the movie I've been so excited about! I highly recommend it--the kids in the audience with us all seemed to love it, but the plot is really more adult, and so even if you don't have a young friend to bring with you it's worth seeing.
I'll do a more in-depth post about my skirt and hat soon, but I made the hat over spring break as a millinery experiment and the skirt before the centennial celebration at Orchard House.  I hadn't taken any good pictures until today, so now I can actually show you!  In the meantime, here is a brief peak into how I end up with pictures of my clothes...it's a long, awkward process.

I'm a little late to the stocking party (see posts here and here), but while reading May Day in Tales of the Jazz Age this sibling argument between socialist-party-worker Henry and his sister, I had to investigate myself.  While sitting on his desk, Edith and Henry have the following conversation:

"I suppose you think I'm a --a waster. Sort of the World's Worst Butterfly."
Henry laughed....
She paused, " --but somehow I began thinking how absolutely different the party I'm on is from --from all your purposes. It seems sort of --of incongruous, doesn't it? --me being at a party like that, and you over here working for a thing that'll make that sort of party impossible ever any more, if your ideas work."
...Her feet, which had been idly swinging, stopped and her voice dropped a note.
..."You're wearing beautiful stockings," he interrupted. "What on earth are they?"
"They're embroidered," she replied, glancing down. "Aren't they cunning?" She raised her skirts and uncovered slim, silk-sheathed calves. "Or do you disapprove of silk stockings?"


Who could ever disapprove of silk stockings?  Well, when the flappers started rolling them down and wearing shorter skirts...a lot of people.

I decided to have a look at 1920s images of stockings while thinking of Edith, and I found some I really liked!  Not many of them are exactly what I pictured as an embroidered silk stocking, but there are still a lot of fun.  What do you think? Will you be rolling your stockings for Gatsby events this year?

My family is firmly divided on dessert.  I am on the fruit side of the line, but my brother is on the chocolate side with my mother.  Because my most common excuse to bake is family functions, I am always on the lookout for delicious chocolate recipes.  A couple of years ago at my library's annual book sale I picked up a copy of Hershey's 1934 Cookbook, a modern re-print of the original 1934 chocolate recipe collection by Hershey's Chocolate.

These recipes need a delicate hand and a lot of adjustment, because my oven is a lot more powerful than a 1930s oven and I have to check these cakes often or they dry out quickly.  However while these recipes take a little more attention than many of my others, I love the vintage charm in these cakes--someday I will have an excuse to make the truly fabulous depression Potato Cocoa Cakes--and the unique combinations are certainly crowd-pleasers!
I'm getting better with each cake I bake from this book, and this cake was easily the best yet.  Friday was my brother's high school graduation, so this cake was his request: chocolate cake with chocolate icing and more chocolate!

The cake is the Demon Cake and Bitter Chocolate Frosting recipes from 1934 Cookbook with a buttermilk glaze on each cake layer based on the recipe from The Bake Sale Cookbook by Sally Sampson.

The Demon Cake is a buttermilk chocolate cake with separated eggs (something common in the cakes in this book): the yolks are blended into the batter while the whites are whipped to stiff peaks and then folded in at the end.  This makes the cake really fluffy and light while preserving the intensity of using unsweetened chocolate.

The buttercream is a mix of coco powder and unsweetened chocolate squares.  I also used a few drops of my coveted Mexican vanilla (such a great gift!) and a pinch of cinnamon to give the chocolate some depth.  I wanted to keep this looking classically homemade (even though my brother is the only person I know who actually eats fondant) so the garnish is just a shaved Hershey bar (I had to honor the original!) and a sliced fresh strawberry.  I was so pleased with the way this cake came out-Demon Cake is definitely on the win list! 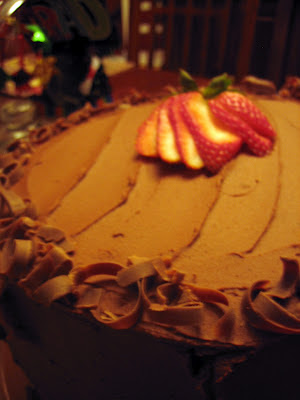