In Which Many Pickled Limes Are Eaten

It stands to reason that if you bring a jar of pickled limes made as faithfully to Little Women's pickled limes as possible, your fellow Alcott scholars can be cajoled into taste testing them. 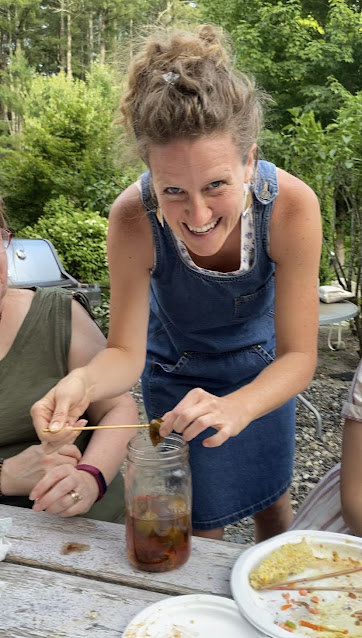 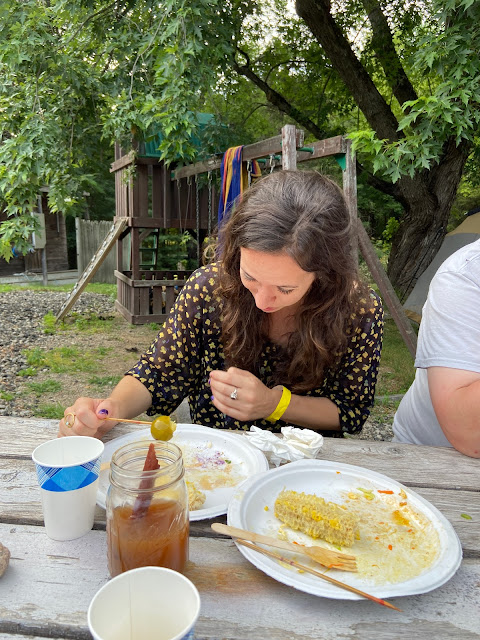 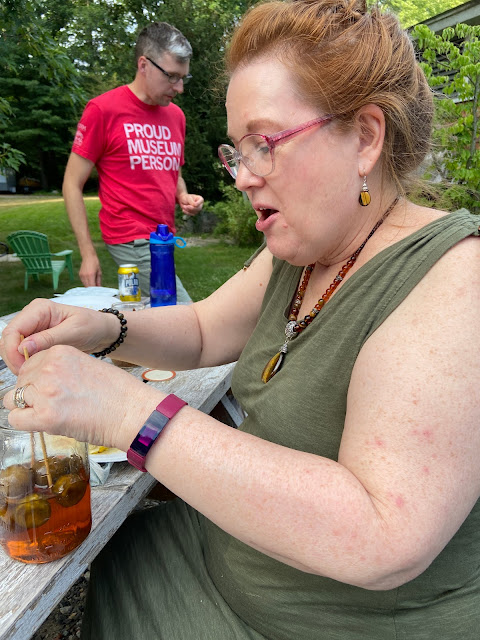 And so they were! Thanks friends.

In fact, both the sweet and sugar-free versions were such a hit I went home with motivation to make them again! So it's likely these will pop up in my future. But for now, let's review how this batch was made.

As with my first experiment, the limes were washed and then jarred with salt water using a 1tbs:2c salt:water ratio. They stayed in the salt water for 1 week, then were boiled twice in plain unsalted water. Changing out the water and repeating the process helps draw salt from the limes - it can be done many times, but I stopped at the second because I'm impatient. 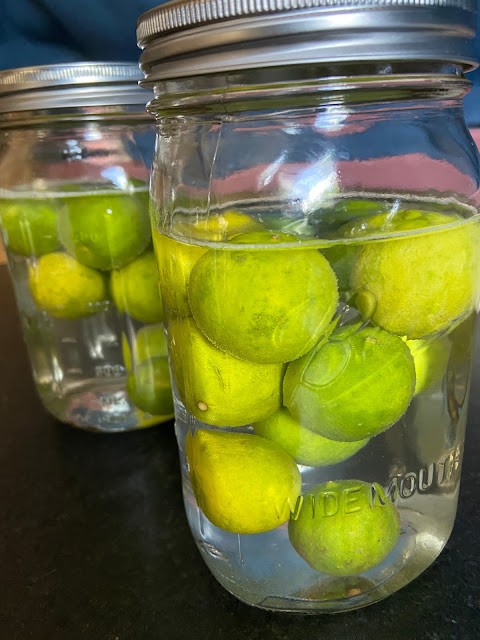 The limes went from bright green-yellow to a dull yellow-brown after 6 days in the brine. This color change is actually very similar to the first batch, which I thought was interesting! (Also, I'll be pulling in screenshots from my Instagram story on lime pickling for this, because I apparently forgot to save any of the process photos I was taking. Oops.)

After boiling, the limes were divided in half and put into their jars while I got the vinegar mixtures ready. For the unsweetened mix, I used the same recipe as my first experiment, which comes from The Boston Cooking-School Magazine vol. 17 (1912):

Make a brine strong enough to float an egg and in quantity to cover a dozen limes. Let stand six days stirring the brine each day. Drain and set to boil in two quarts of boiling water. Let boil fifteen minutes. Let drain and become cold. Scald one quart of vinegar half an ounce of cloves half an ounce of mace half an ounce of ginger root half an ounce of horse radish and one ounce o f white mustard seed and pour over the limes disposed in fruit jars. Close securely. These are best after keeping some months.

This recipe is half a century later than our target decade, but aligns pretty closely to the spices described in plum pickle and lemon pickle recipes I have from 1869. So I think it's a decent guess at what might have been used. I also ended up throwing in a couple of cardamom pods because I had them, and I like cardamom. But that was a personal addition!

The second batch was the sweet pickled lime recipe I found in another volume of the same Boston Cooking-School Magazine (vol 16, also 1912). While period descriptions of pickled limes eaten in Boston explicitly say they are not sweet, I also have tariff records from 1824 listing "limes preserved in sugar" as an import. In fact, there's a number of sources referencing limes preserved in sugar or syrup throughout the 19th century. So while these aren't the limes Amy March was sucking on, I think it's possible she could have encountered them (maybe when on tour with Aunt March in Europe)...and I wanted to try them.

The recipe is much plainer than the spiced vinegar brine:

[After boiling saltwater limes] Make a thick syrup of sugar and water using a half cup of vinegar to a quart of water. Cook the syrup until it is as thick as molasses, let it get cold. Prick each lime two or three times with a silver fork. When they and the syrup are cold put them together and let them stand over night. The syrup will then be thinned by the juice of the limes. If it is too watery boil it over again. Put the limes in jars and pour the cold syrup over them. They will keep indefinitely if nobody knows they are in the store closet.
I ended up using the leftover spiced vinegar from the unsweetened limes, but otherwise followed this exactly. When I make them again, I'll use less liquid though. The syrup took forever to thicken (there was a lot of water to boil out!) and I didn't have that many limes to cover. And as the instructions mention, I did have to re-boil a couple of days later after the juice loosened the syrup. 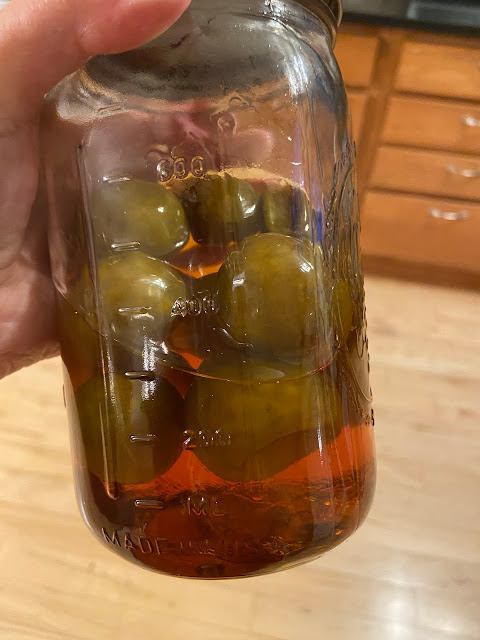 It was hard to capture in photos, but you could actually see shimmery swirls of lime juice/lime oil floating in the syrup as the limes released into the sugar. After canning, both jars sat in a dark cupboard for about 6 weeks before we cracked them open for tasting.
In the end, the limes made all the difference. Both of these versions were delicious! The unsweetened limes I think are best described as zesty, which I'd mostly attribute to the ginger and peppercorns in the brine. The cider vinegar zing was pretty mild, and the acid from the limes was also mellow. There was still a little bit of lime or citrus flavor, but it definitely didn't taste like a normal raw lime. The syrup limes were sweet (obviously), but had a more pronounced acid bite at the end which I think provided some balance and prevented the sugar from punching you in the teeth.
As long-time readers of this blog will know, I love historical foods. The more weird and surprising, the better. So I was always going to be excited about pickled limes. For me, the true triumph was the exclamations of "oh! this is actually pretty good!" from the most doubtful observers in the group.
So on that note, we close the book on pickled limes (for now). If anyone else makes their own, please let me know how they turn out! Cheers to delightful, surprising, and memorable historical food experiments. 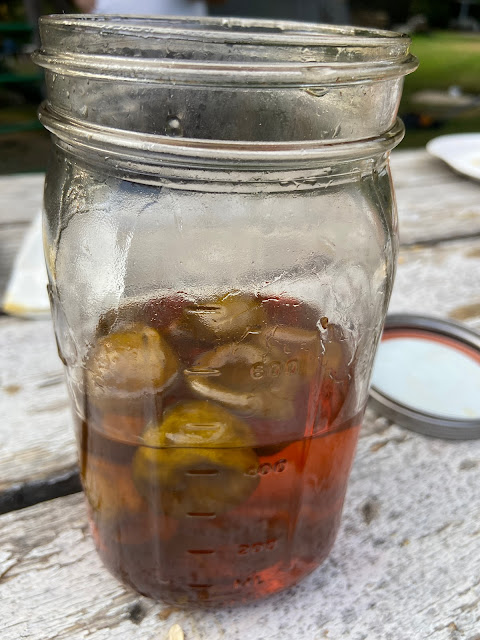