In my recent recounting of the February expedition to Nestlenook, I mentioned that I wore a mix of old and new items. Even though we ended up planning the trip last minute and I didn't have a ton of time, I'd been thinking about skating clothes for years and was inspired to try and knock some garments out. And I did!

Though I do have a warm winter 1870s outfit (which I've worn on previous excursions), I wanted to do something with a more explicit skating theme, similar to these images:

The key elements that stuck with me when looking for inspiration were layers, gathered/bustled-up skirts exposing petticoats (but everything hitting above the ankle, where it would be out of the way for skating), and fur or knit trim on the coat or bodice. Also, all of my inspiration was 1860s...which makes sense, as I've spend a lot of time thinking about 1860s ice skating in particular while reading period letters over the years. So a vaguely 1860s ensemble it would be!

I thought I could get away with using the fur-trimmed bodice from my 1870s ensemble, worn with only the underskirt (looped up all the way around) if I added a contrasting petticoat underneath. Originally I planned to wear hoops as well, but when I decided to attempt throwing together a quilted petticoat I decided hoops didn't make sense.

Quilted petticoats were a common winter layer in the 18th and 19th centuries - while the style changed to support the popular silhouettes of particular decades, the basic premise remained the same. A skirt of wool, silk, or cotton was quilted over an inner layer of batting to provide warmth and insulation. Essentially, it's a wearable blanket. As an eternally cold human, I really wish these were still in fashion! If you poke around online, it's easy to find beautiful examples of quilted petticoats with all kinds of intricate quilting designs in addition to more utilitarian diamonds/straight lines. And while I really love the way they look, I just do not have the patience to hand quilt a piece this large. (See: the embroidered canezou I've been working on in fits and spurts since 2020.) But I wanted to be warm, and was interested in figuring out if I could do that historically, so I went for historical results and decidedly modern methods. 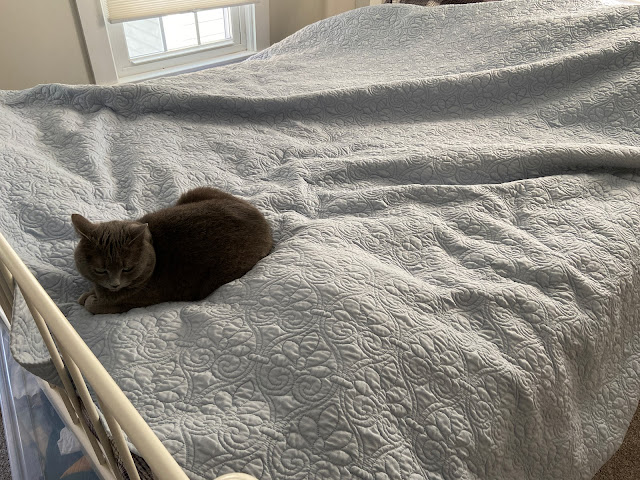 I found a lightweight cotton quilt with a pretty floral stitch pattern second hand that seemed like a perfect petticoat candidate. After a washing ("assisted" by a fluffy demon), I measured out the height I would need and cut the quilt down - I am in fact much shorter than a queen-sized bed. Then it was time to seam rip...and seam rip...and seam rip. I ripped all of the quilt stitching and cut the batting out of my "seam allowance" at each side where I would sew the quilt into a tube and at the top to give myself a lighter, unquilted section at the top of my hips (something I'd seen on originals). Then the quilt became a tube, and the tube became a skirt by attaching a deep cotton section to the top (so that the quilt started at my hips, rather than my waist).

That was as far as I got by trip day...as usual. I ended up throwing sewing materials into the car, and pleating the petticoat to the waistband on my friend's floor before we left. Then the waistband was added in the parlor of the inn where we stayed (with both of us sewing because I am slow). Onto my body it went, along with modern fleece leggings, tall historical wool stockings, a chemise, a corset, a modern thermal long underwear shirt (which I think is a not inaccurate as a layer), boots, and the "witch winter" velvet bodice and skirt. Layers don't have to be thick to keep you warm!

I ended up borrowing a muff from a friend because I forgot mine at home, and I did put modern foot warmers in my boots after the sleigh (I have bad circulation and my toes were entirely numb). But aside from that, I was warm enough to survive an open sleigh ride! Which given we were sitting for a long time felt like a big achievement - ice skating, while incredibly fun, is pretty active so it's easier to be toasty. 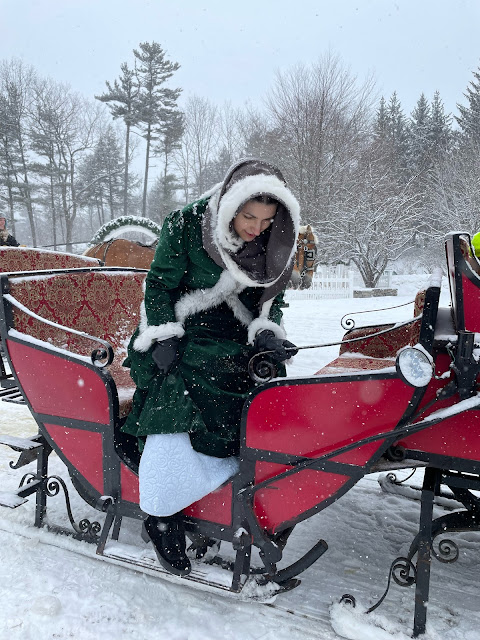 The quilted petticoat provided a somewhat full shape, but isn't distinctly 1860s - since I think it's likely people in the 19th century continued to wear these kinds of practical garments for activities where fashion was less important, I'm ok with that. Overall, my approach of mish-mashing together items I already owned with new, stylish accessories felt like a very natural sort of way of ending up in an outfit. To me that's the difference between a "look" (as we might say in 2022) and real, lived-in clothes. So it works for me, even if I wasn't the most fashionably wide skater on the pond!

(Although I probably was the widest skater on the pond...details. *waves hand*)

Speaking of fashionable accessories: I did make on of those as well. I knew I wanted to cover my head because that is a really solid approach to staying warm, and just as I was starting to think about how I would do so Vivien at Fresh Frippery posted a lovely convertible hood tutorial. Using her measurements as a guide, I was able to pull some checked brown wool and fur trim from the stash to put together a reasonable mid-century winter hood. And with the falling snow, I was so glad I had it!

Altogether, I was immensely pleased with the ensemble! 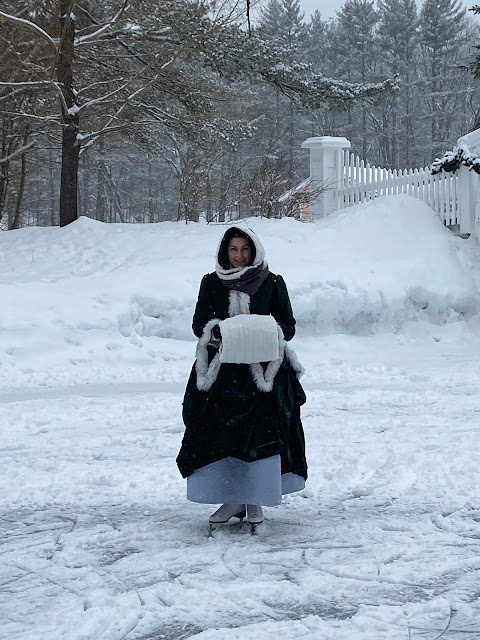 I made it through a day of sleighs and skating and general snow shenanigans in my quilted petticoat. It was wearable! But it was not my finest work. When we got home, it went to the UFO pile to be fixed before it was put away...and remained there until last week, when I was inspired to write this post and wanted to finish the petticoat for real before blogging about it.

I went back and removed the waistband and pulled out the pleats. After ironing everything, I measured and put in (more) evenly-spaced pleats. I even added closures! So now this is officially done and ready to be worn again. 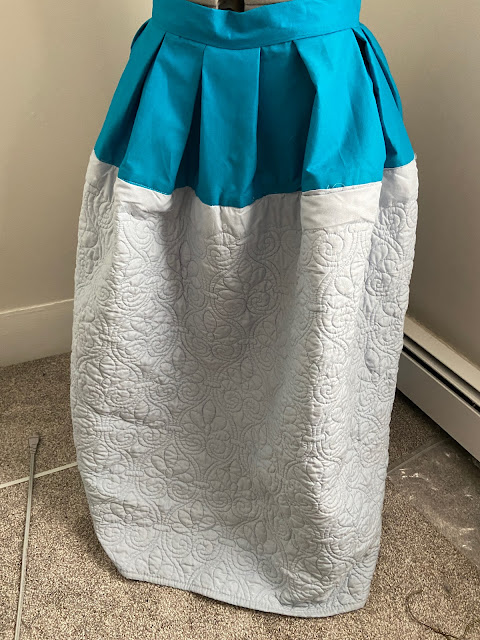 And as a final fun fact (and ultra-throwback): in the spirit of trying to minimize how many new materials I buy, I was able to make both the hood and the petticoat using stash materials (minus the quilt itself, which I bought). The bright blue cotton at the top of the petticoat was left over from a 1950s prom dress I made way back in 2014! That means this cotton remnant has been with me through 3 moves - oi vey. I'm very glad I was able to find a great use for it, even if it won't be seen when the petticoat is worn.